A wedding anniversary is an occasion to shower your loved one with a special gift – and there’s nothing more precious than gems and jewelry! Rich in meaning, they symbolize the virtues that have made your marriage beautiful and lasting. 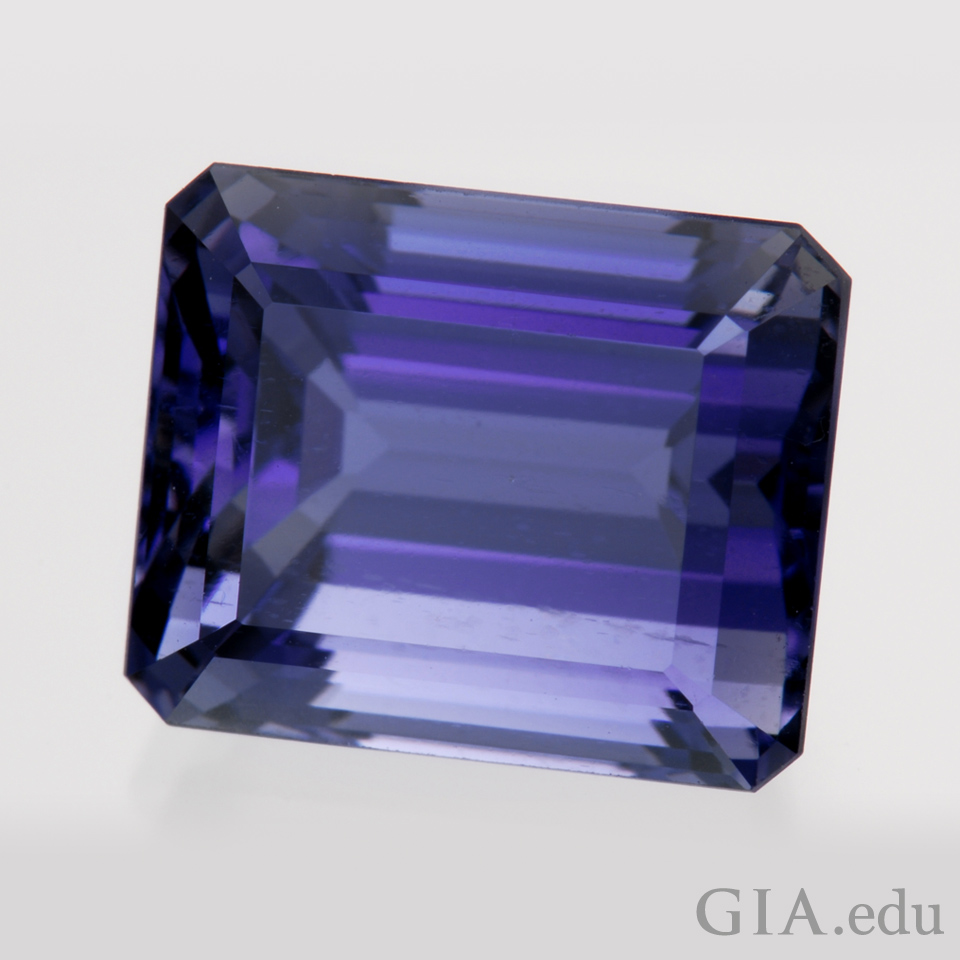 A 21-year marriage bears witness to shared experiences, and that’s why iolite is the perfect gem to celebrate it. Iolite is pleochroic – when you turn it, you’ll see distinct colors in different directions. It can display a blue to violet hue in one direction and pale yellow to colorless in another. Iolite is sometimes used as a substitute for tanzanite because it is similar in color, but is generally more affordable. Iolite is not typically treated, so the color of the gem you’re buying is how Mother Nature made it—and if you ever hit a rough patch in married life, you can imitate the Vikings: they reputedly used iolite to find the sun on cloudy days. 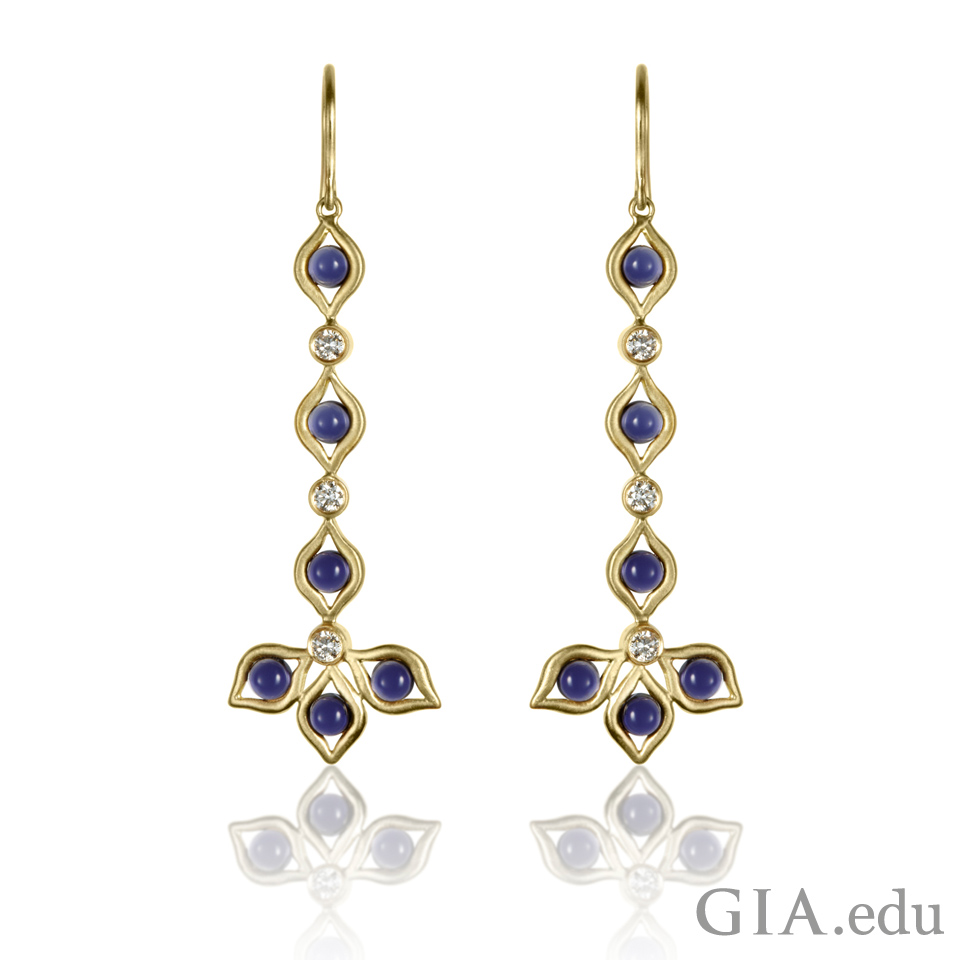 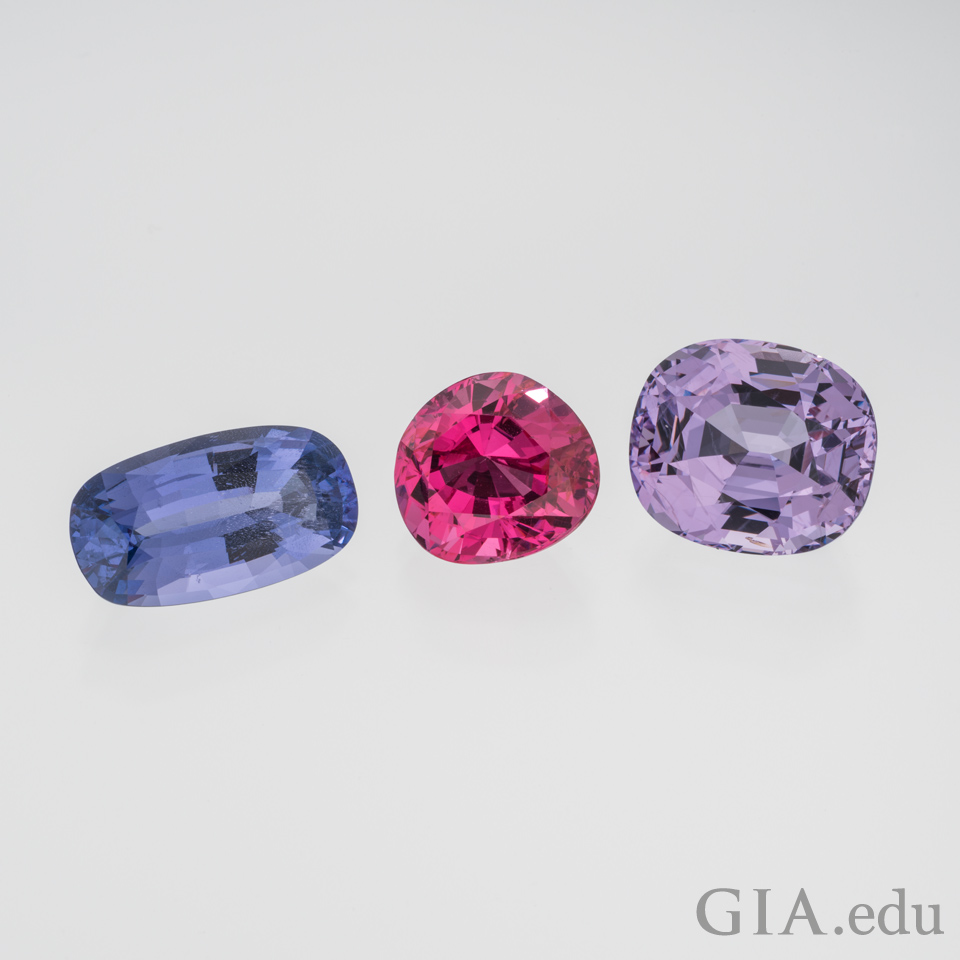 The 18th-century poet William Cowper penned the famous words: “Variety’s the very spice of life that gives it all its flavour,”— and Spinel – a gem that comes in red, pink, orange, purple and blue – can certainly add a dash of spice to your 22nd wedding celebration! There’s more good news about spinel: it’s usually free of inclusions and comes in crystals large enough to produce beautiful gems, plus, along with peridot, spinel is an August birthstone.

Red spinel is so beautiful, in fact, that it was long mistaken for ruby. One famous red spinel, the 170 ct Black Prince’s “Ruby” is set in Britain’s royal crown, the Imperial State Crown. Red spinel is generally the most desirable, especially gems with a pure red to purplish red hue and a medium to medium dark tone. If you’re looking for pink or red spinels, our Pink Gemstone Buying Guide and Red Gemstone Buying Guide can be useful — but, a word of caution: many spinels are synthetic (man-made) and it should be disclosed. 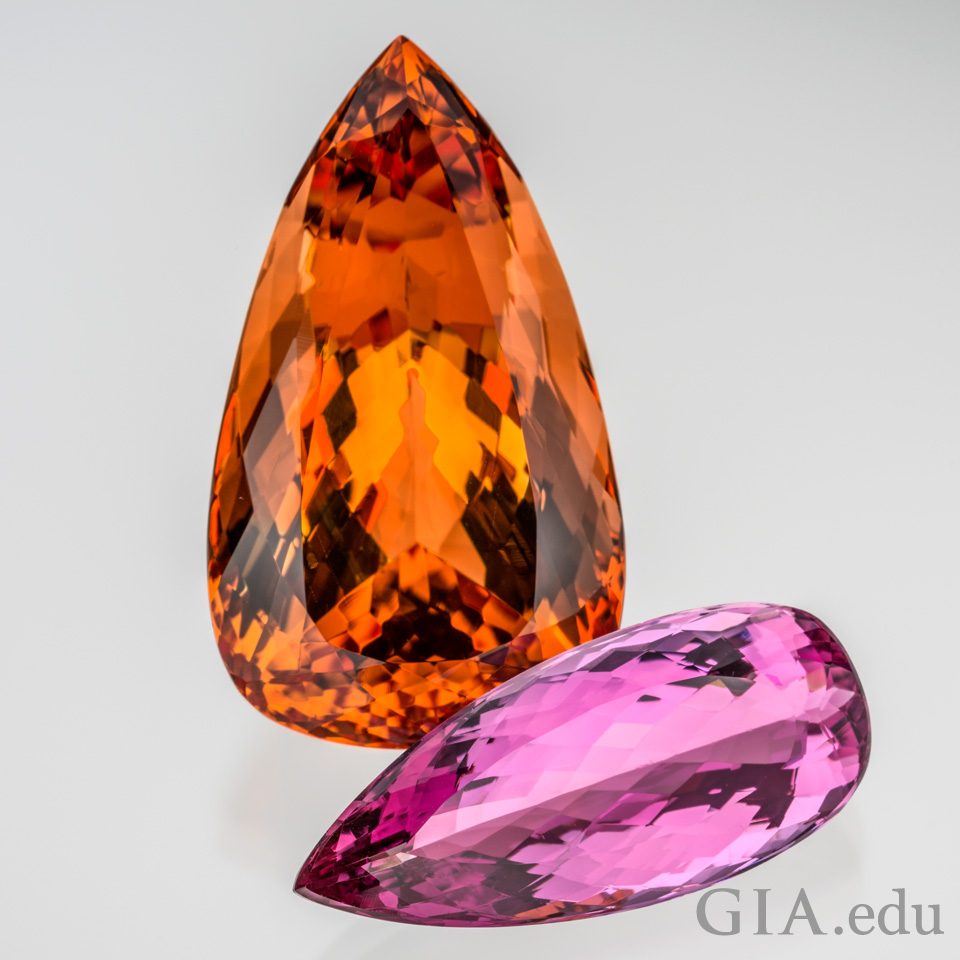 In 19th century Russia, one particular color of topaz was so valued that only the royal family was allowed to own it: it was called Imperial Topaz. While this practice has obviously fallen by the wayside, topaz is still prized, making it a regal gift for your spouse. The color of Imperial Topaz is highly debated; some in the trade say it is medium reddish orange to orangy red, while others describe it as being yellowish orange, orangy yellow and having slightly purplish red to reddish orange pleochroism. Debates aside, topaz is the November birthstone, so your spouse will have another reason to wear it if he or she was born in that month. And you can give it with a sweet sentiment: Legend has it that topaz worn above the heart guaranteed long life, beauty and intelligence. Our Topaz Buying Guide can help you find a gem deserving of the king or queen of your heart.

Your spouse is unique – and so is tanzanite. It is only found in one place on earth: the hills of northern Tanzania in the shadows of Mount Kilmanjaro. Discovered by a Masai tribesman in 1967, tanzanite is a blue to violet to purple variety of the mineral zoisite. A pure blue similar to fine sapphire and an intense violet-blue are usually the most valuable colors. It’s also pleochroic, showing three different colors in three directions. Tanzanite comes with another added perk: it’s the December birthstone, so if your spouse was born in December, she’ll have another reason to wear it. Ready to go shopping? Be sure to take our Tanzanite Buying Guide with you. 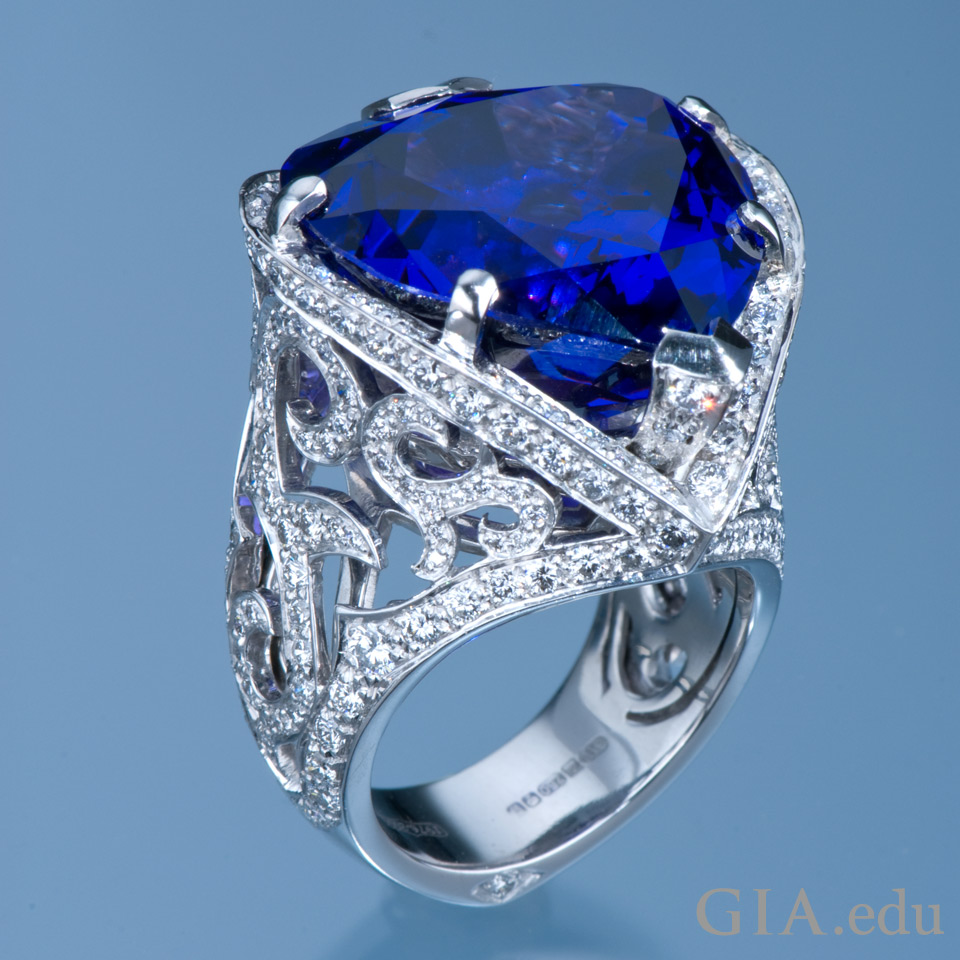 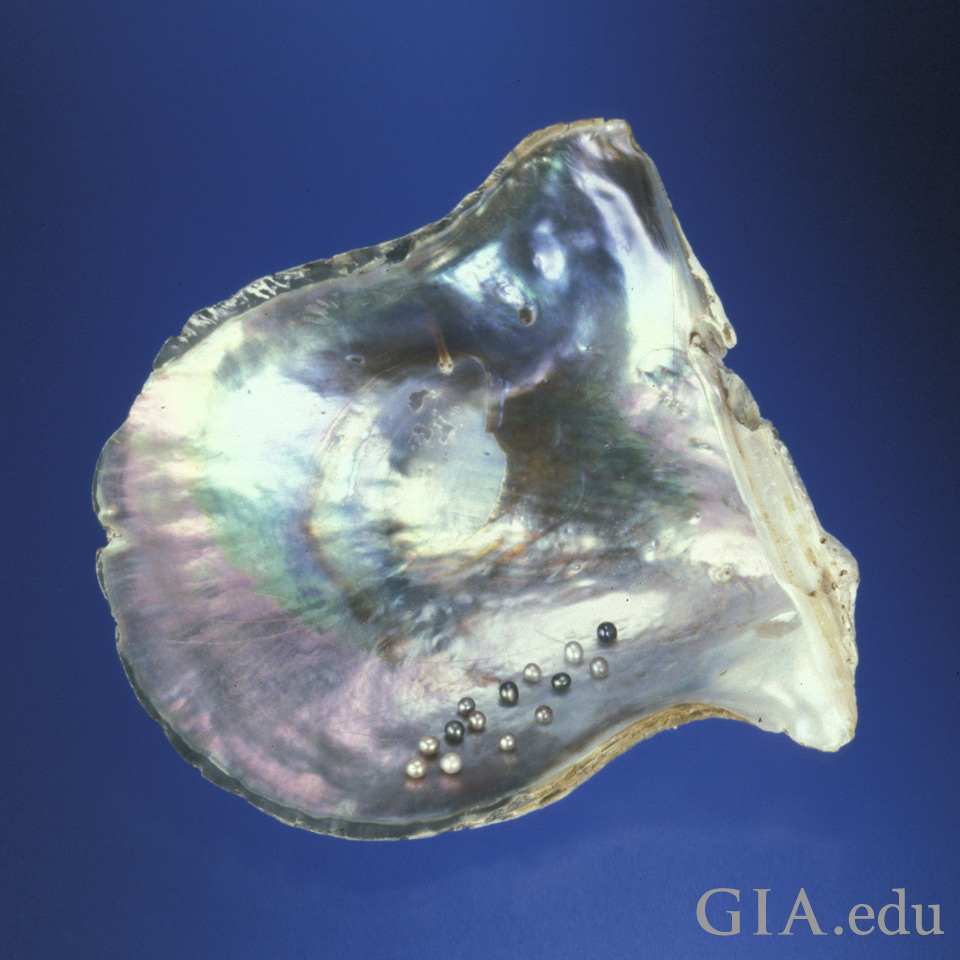 Mother-of-pearl, which is made from the shell of pearl-bearing mollusks, is often used in jewelry. Photo: Maha Tannous/GIA

It’s amazing how fast 25 years fly. Since getting married, you’ve probably bought a house… may have raised children… attended high school and college graduations… walked your now-adult-children down the aisle and “given them away.” And it all happened in the blink of an eye. Now it’s time to cherish the sweet moments of the life you and your spouse have shared together. Since it’s your silver anniversary, you could give jewelry set in silver or another white metal. White gold and platinum are classic choices and silver has been valued for more than 5,000 years. If you want a gem with a silvery sheen, mother-of-pearl can be a gift waiting to be savored by your spouse. 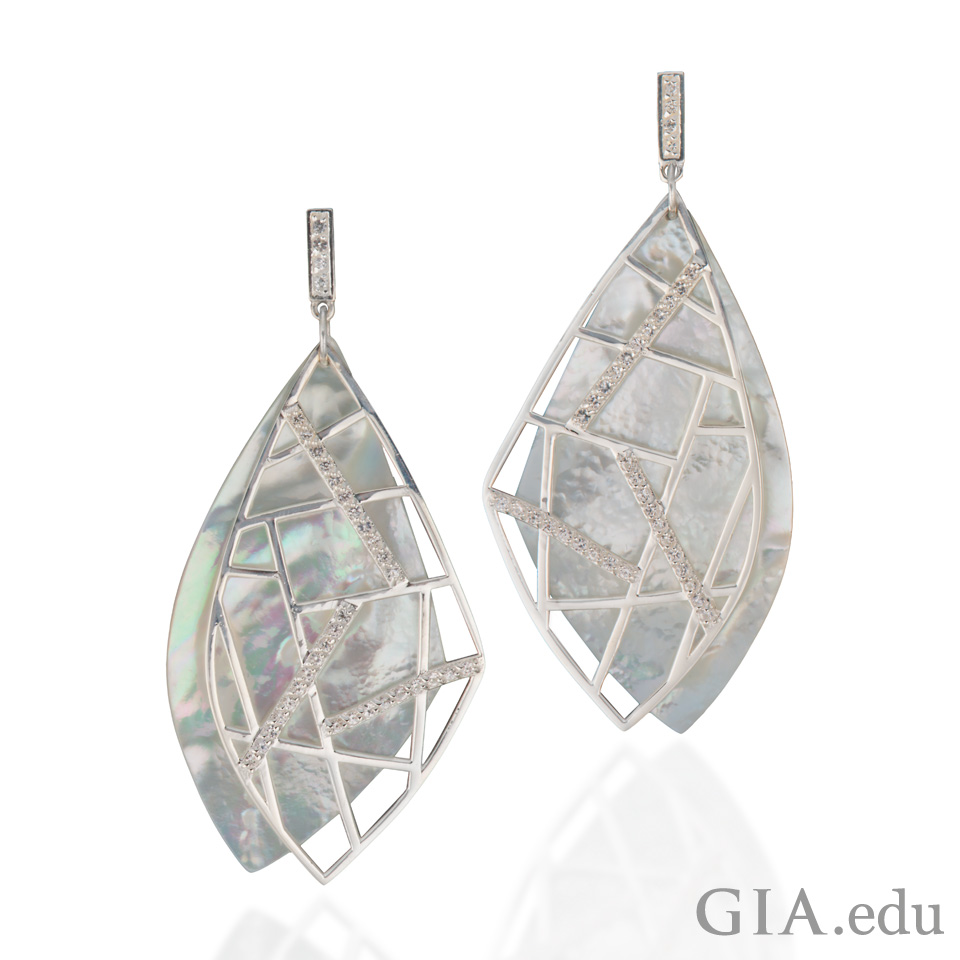 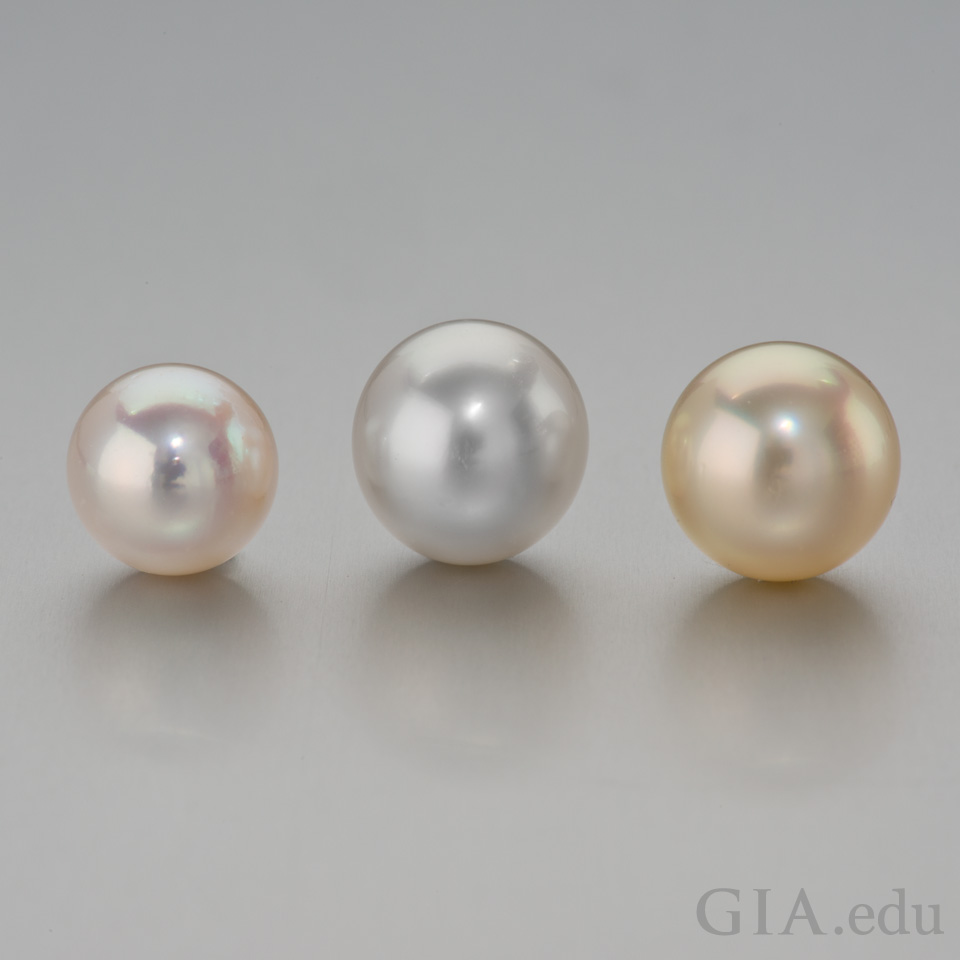 From a little seed grows a cultured pearl. And so it is with your marriage. Affections of youth have blossomed into a lifelong love that has lasted 10,957 days or 30 years. That makes cultured pearl jewelry a fitting gift to express your union. There are four types of cultured pearls: akoya, Tahitian, South Sea, and freshwater, so you’ll have endless choices. GIA’s 7 Pearl Factors can help you pick a quality piece, and if your spouse’s birthday is in June, the pearl jewelry you buy can do double-duty since it’s the June birthstone. If you’re looking for a gift that is decidedly different, a faceted cultured pearl may be something to wow your spouse. Wherever your shopping takes you, be sure to take our Pearl Buying Guide along. 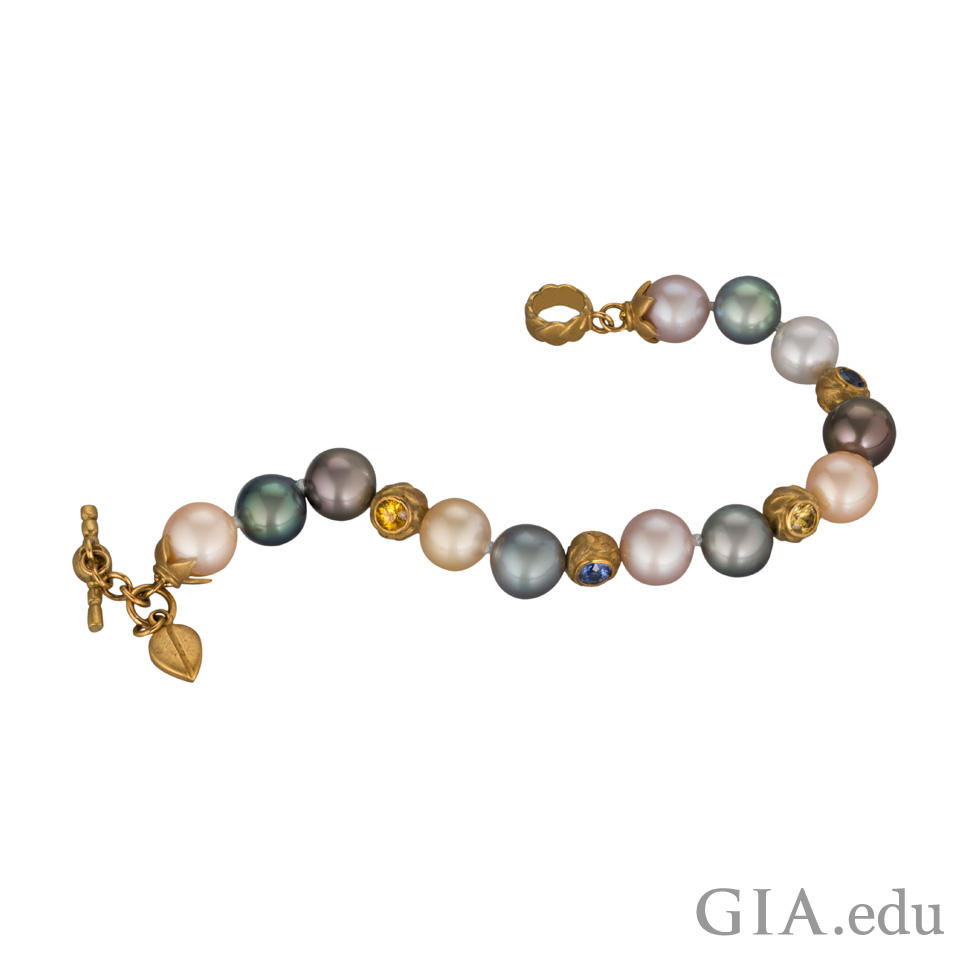 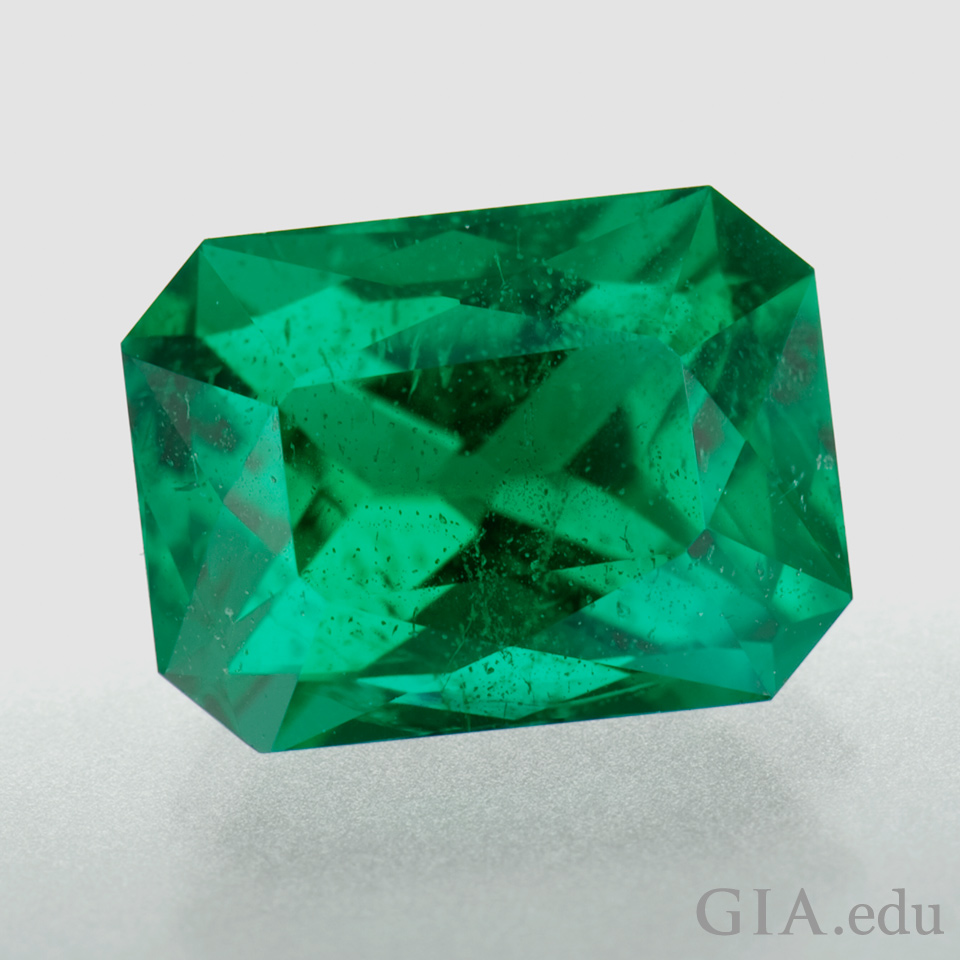 From pharaohs to Inca kings, emerald has enchanted royalty. The legendary Crown of the Andes is one example of how the Spanish revered the gem, while the story of the Spanish galleon, the Nuestra Señora de Atocha, shows the length generations of treasure hunters went to discover its sunken loot. With such a colorful history, emerald is a wonderful gift for your spouse on your 35th wedding anniversary.

The most desirable emerald colors are bluish green to pure green, with vivid color saturation that’s not too dark. Colombia has been the source of some of the finest gems, but emeralds are found around the world – even in places as remote as Afghanistan. Also remember that emerald is the May birthstone, so your spouse will have numerous opportunities to wear it if she was a May baby. Our Emerald Buying Guide is an indispensable aid when you’re ready to go shopping. 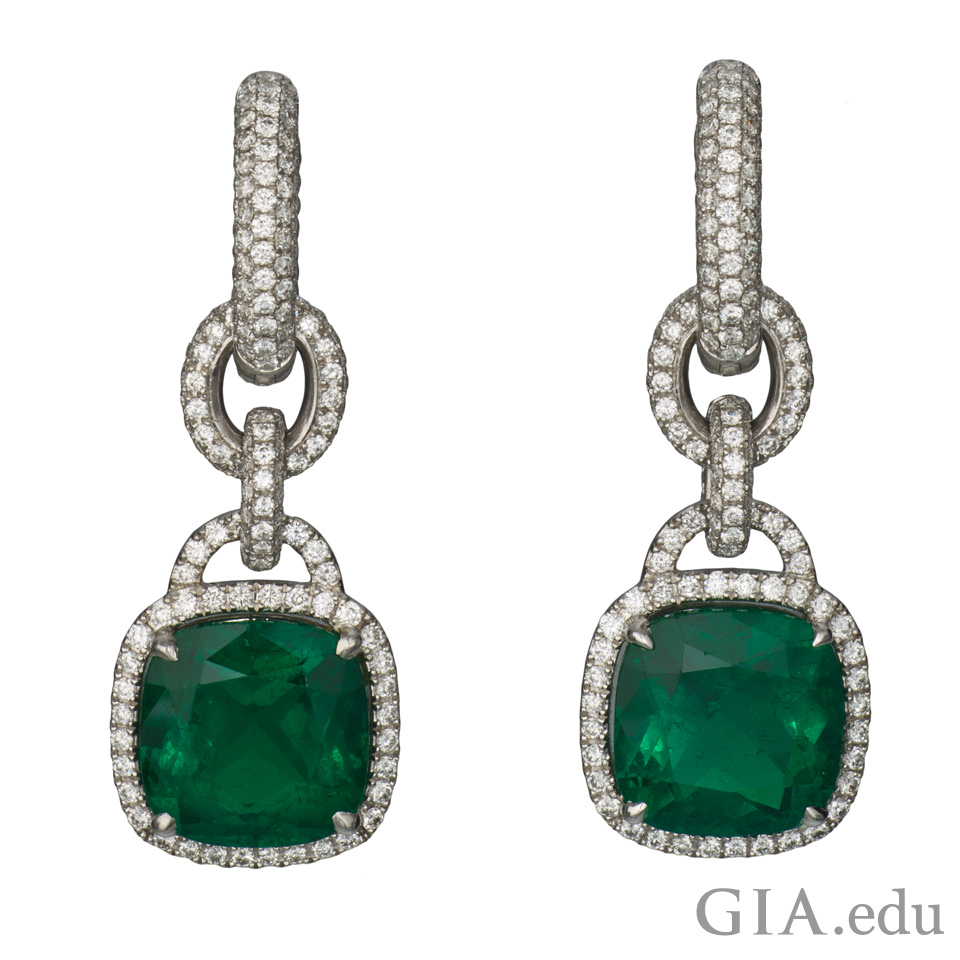 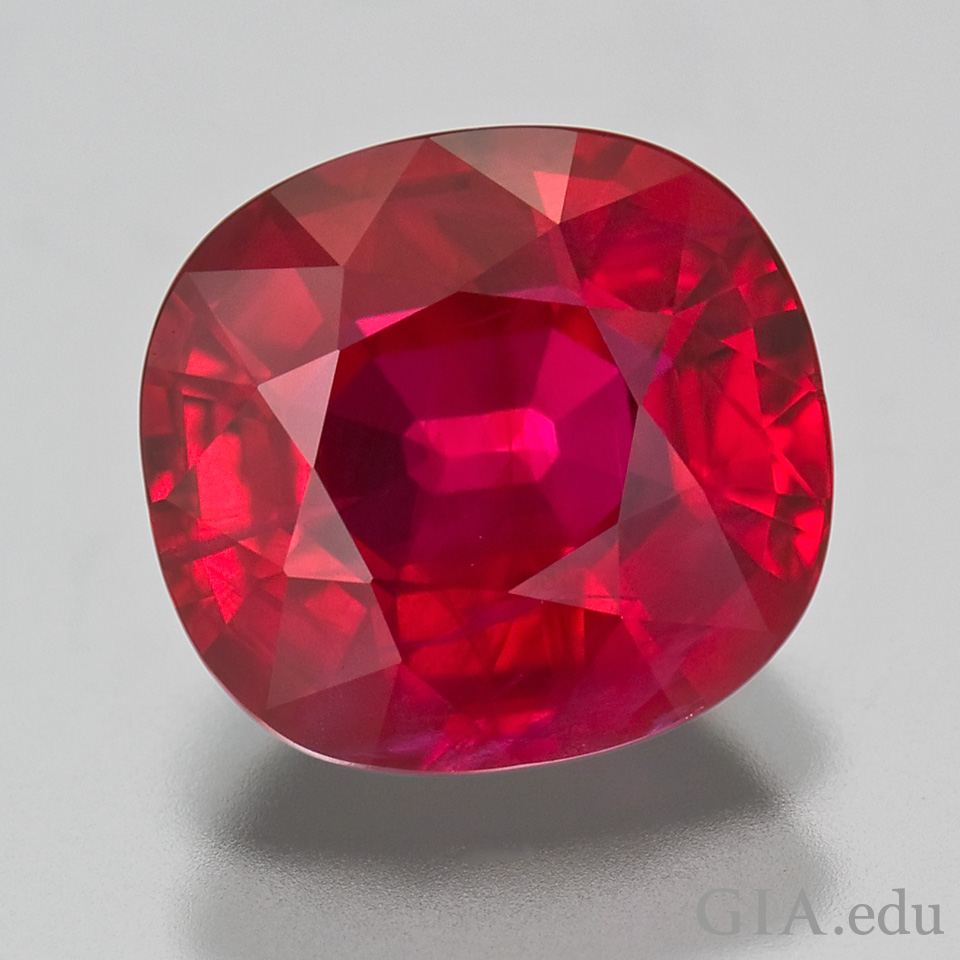 The rich red of ruby is revealed in this 2.58 ct cushion cut from Burma. Photo: Robert Weldon/GIA. Courtesy: Bear Essentials

What causes ruby’s enchanting glow? According to the ancients, a mysterious inner fire that could not be extinguished lit the gem. After four decades of marriage, your relationship can be likened to the ruby’s fabled flame. You and your spouse have encountered a world of experiences, and the inner fire of your mutual commitment and love still burns bright. And that’s why a ruby is an appropriate gift on this landmark anniversary. Our Ruby Buying Guide can help you pick a magnificent stone. And when you give your gift, you can share captivating stories about where rubies come from. 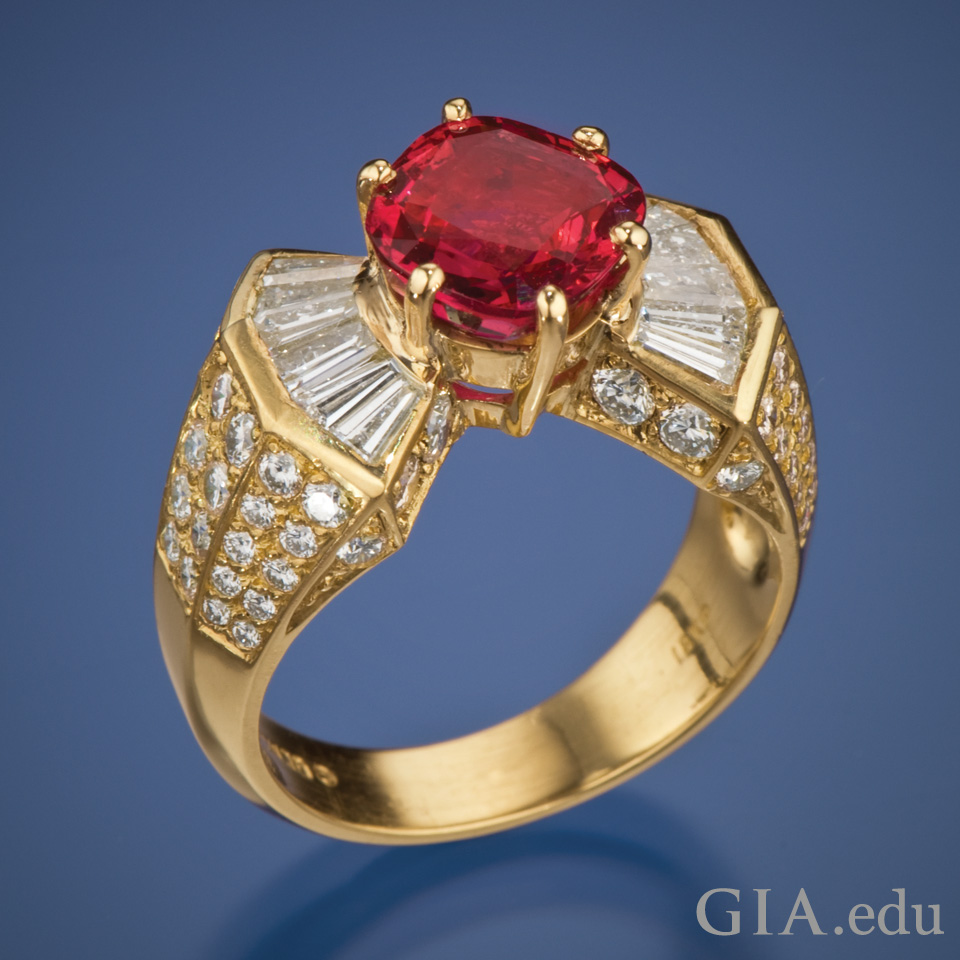 The Winza area of central Tanzania is a source of fine untreated ruby such as the 3.18 ct center stone in this ring. Photo: Robert Weldon/GIA. Courtesy: The Collector Fine Jewelry, Fallbrook, California

Sapphire has traditionally symbolized nobility, truth, sincerity and faithfulness. To have been married for 45 years, you and your spouse obviously embody these traits. Your marriage is clearly strong, and sapphire is similarly durable: it’s a 9 on the Mohs scale.

A 45-year marriage is a rare thing, and so are sapphires that exhibit asterism – a six-ray star pattern caused by light reflecting off needle-like inclusions. You can see this spectacularly displayed in the 112 ct Starry Night Sapphire. Now that you’ve been spellbound by the gem, our Sapphire Buying Guide can help you select a beautiful one. 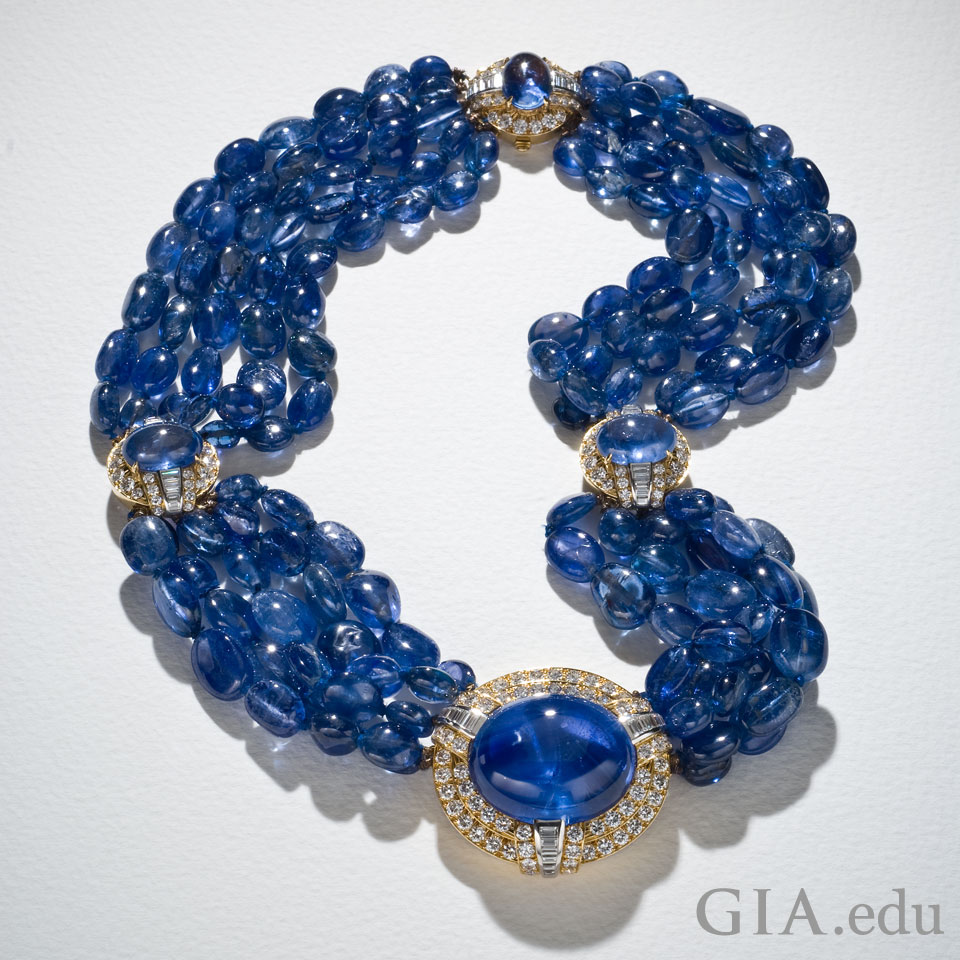 A half a century of being married is an impressive accomplishment. Your years together are probably filled with children, grandchildren, graduations, celebrations – and countless memories of a beautiful life spent together. Such a grand achievement deserves a wedding anniversary gift to equal it. Gold is a meaningful choice, for it conveys timelessness – it was fashioned into jewelry in ancient Egypt, Crete and other cradles of civilization and has been coveted ever since. It also has been associated with the divine, thought to have magical properties, and offer protection – which should please your sweetheart.

If you’re looking for a “golden” gem as a tangible symbol of your 50 years together, Golden South Sea cultured pearls are a great choice. Our blog on Pearl Quality 101 will educate you about what makes a beautiful pearl. And our Pearl Buying Guide can help you shop with confidence. 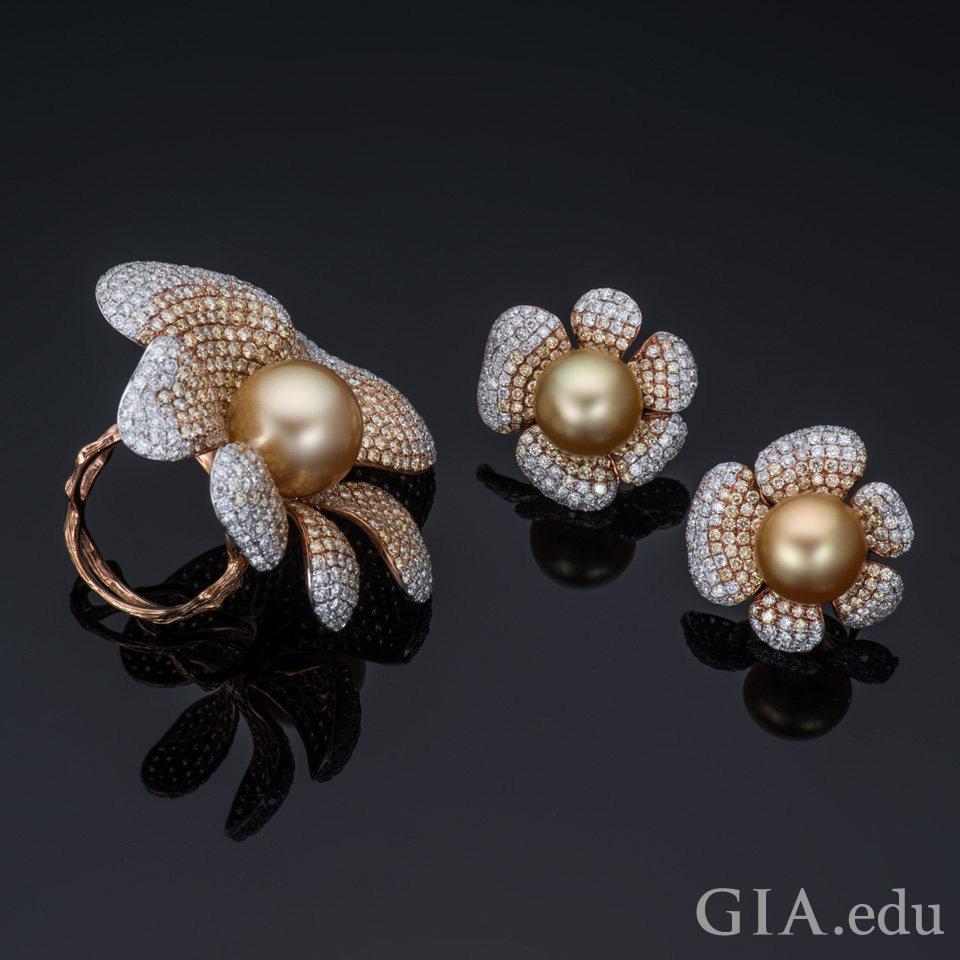 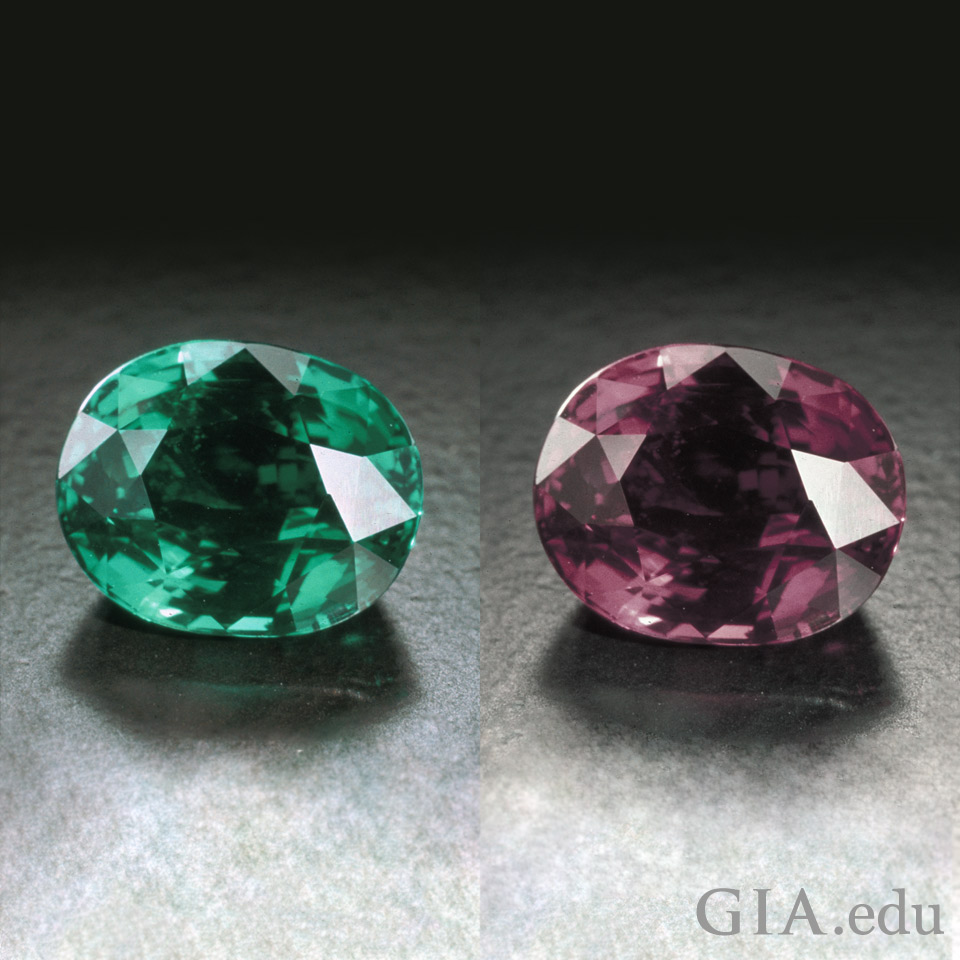 “Emerald by day, ruby by night” – that’s the intriguing nickname for alexandrite, a very rare color-change variety of the mineral chrysoberyl. Alexandrite can be bluish green in daylight or fluorescent light, and change to a brownish or purplish red in incandescent light from a lamp or candle flame. The color change in this gem is so dramatic that the phenomenon is called “the alexandrite effect.” The gem was named after Czar Alexander II, who emancipated Russia’s serfs. A gem with such unusual qualities and rich history makes for a special gift on your 55th wedding anniversary. 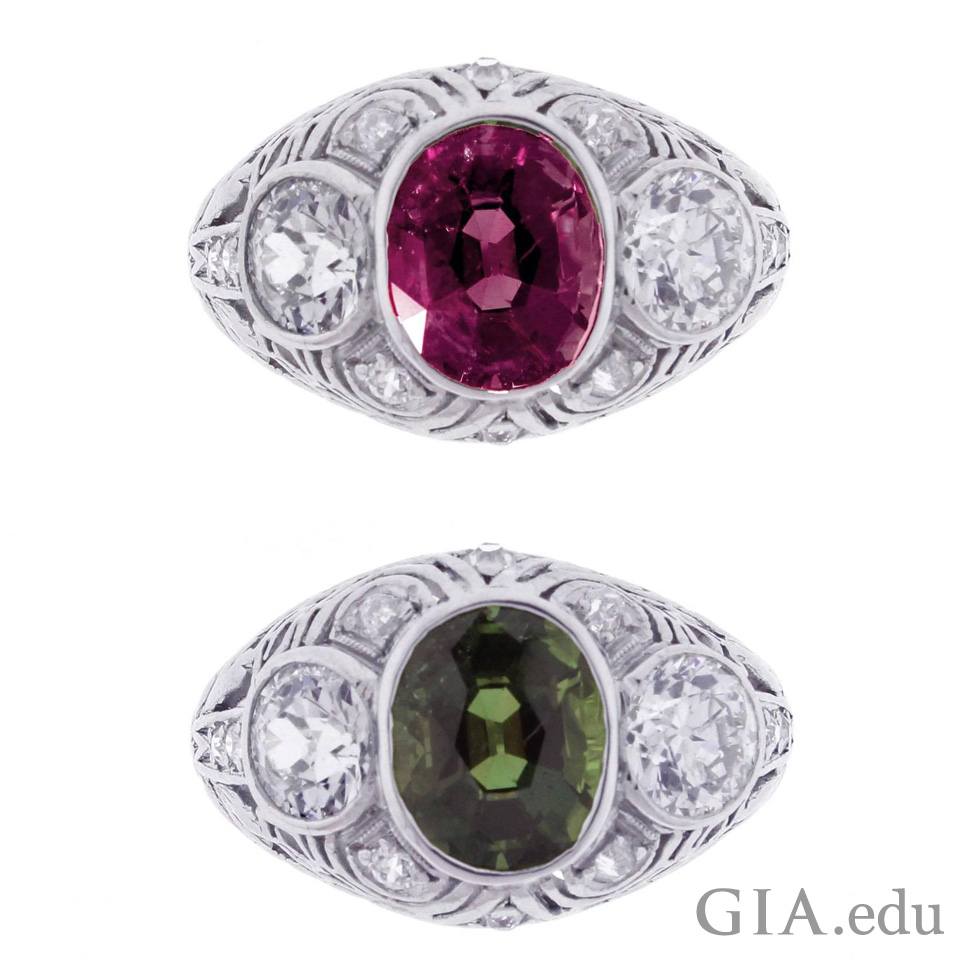 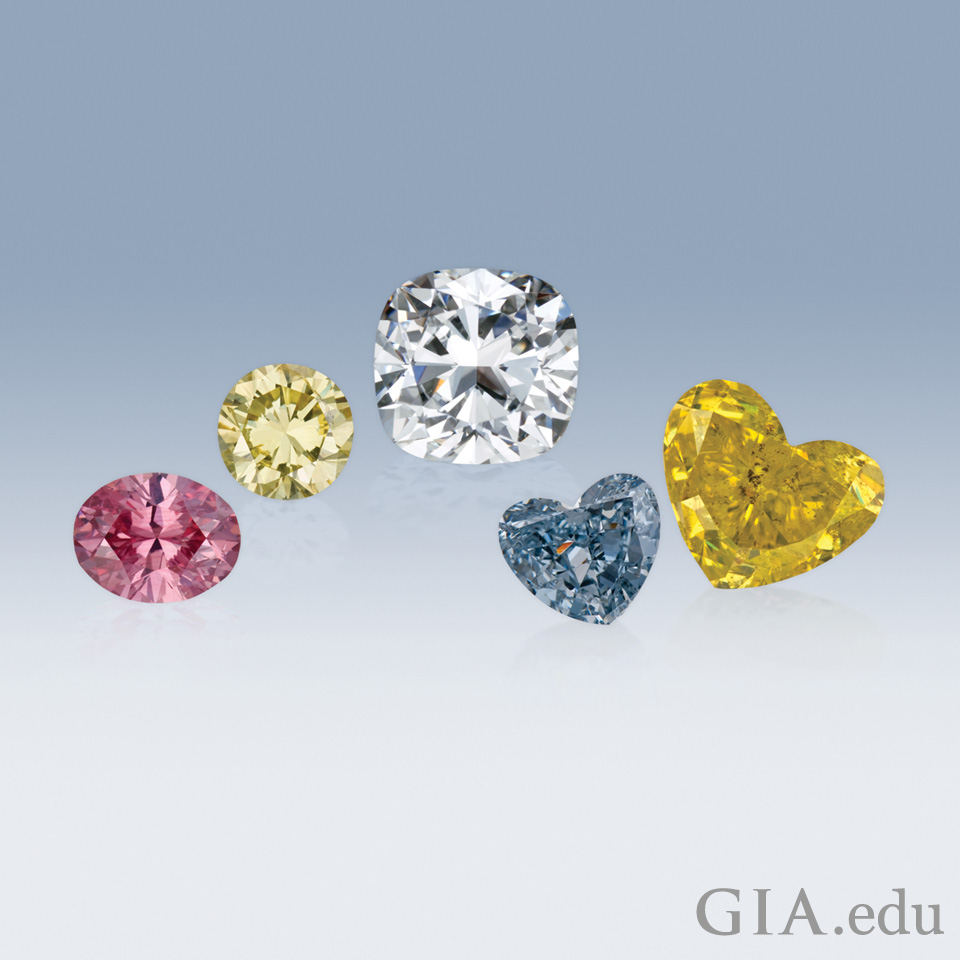 Diamonds offer a range of color choices that are spectacularly beautiful. The finest ones regularly shatter records at auction houses. Photo: Kevin Schumacher and Robert Weldon/GIA

Diamond is the hardest mineral on earth. It formed under high temperature and pressure about 100 miles below the earth’s surface, and then volcanic eruptions brought crystals to locations where they could be found. The story of the diamond is like your marriage: it’s a precious thing that was shaped by unique conditions. Like a diamond, your marriage is admired for its beauty. And like a diamond, it is an unchanging symbol of love and commitment. Take a quick refresher on the 4Cs, and then renew your vows with the gift that marked the start of your married life – or splurge on a colored diamond to celebrate your 60th wedding anniversary. 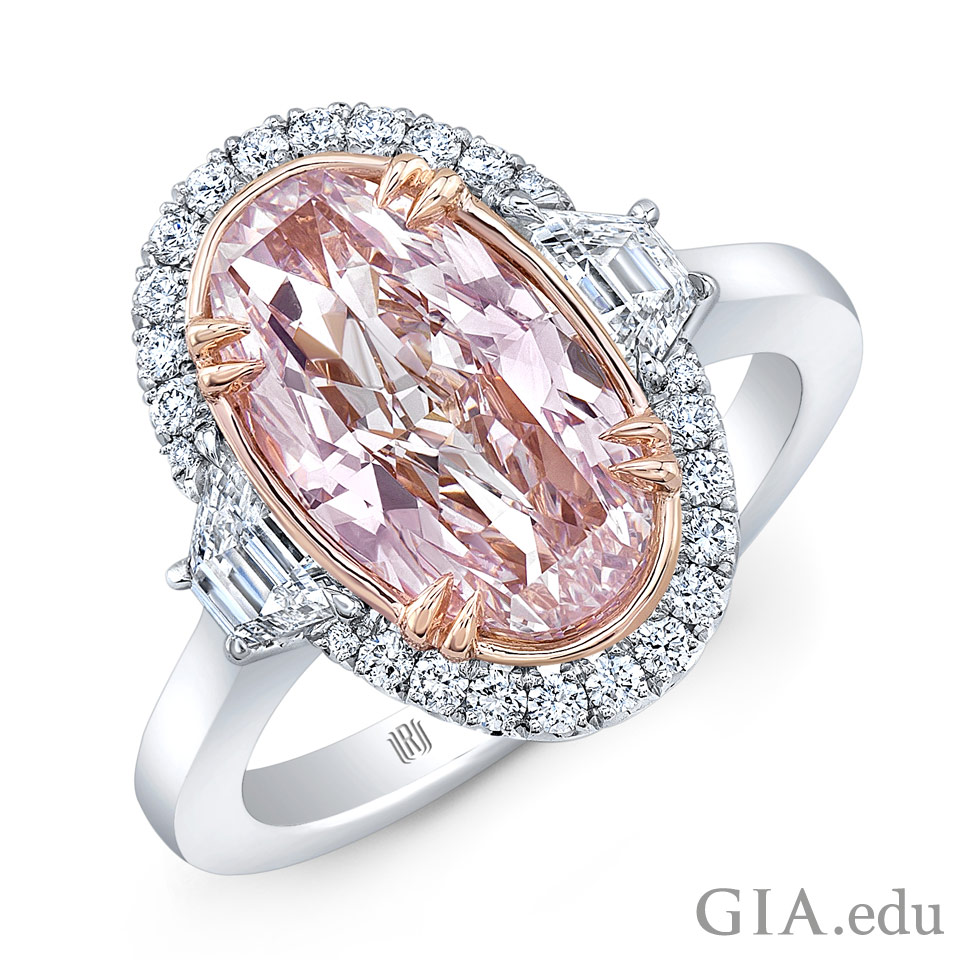 Pink has long symbolized love, and a pink diamond might make your spouse blush – just like she did on your wedding day. This beautiful ring features a 2.32 ct Fancy pink oval shaped diamond set in 18K rose gold, surrounded by colorless diamonds in the half-halos and trapezoid diamonds as side stones, set in platinum. Courtesy: Rahaminov Diamonds

An unknown poet once wrote: “I choose you. And I’ll choose you over and over and over. Without pause, without a doubt, in a heartbeat. I’ll keep choosing you.” These are apt words for celebrating wedding anniversaries. And giving jewelry to your beloved can enshrine the moment against the passing of time.

Wonder what kind of engagement rings our ancestors gave each other? Antique Engagement Rings: Timeless Symbols of Love is filled with romantic tidbits.