Buried deep in the Himalayan foothills of Afghanistan lies a bountiful supply of rich, deep green emerald, and the promise of seeing these beautiful rough gems lured Andy Lucas, GIA manager of Field Gemology in Carlsbad, to this scenic but beleaguered land.

Lucas travels around the world gathering details of the mine to market story for GIA education courses and its scientific publication, Gems & Gemology. And this time, his destination was the remote emerald mines of Panjshir Valley.  The valley’s name means “five lions,” a tribute to five spiritual brothers who once lived there. When he arrived, he found a rugged land with spectacular vistas. 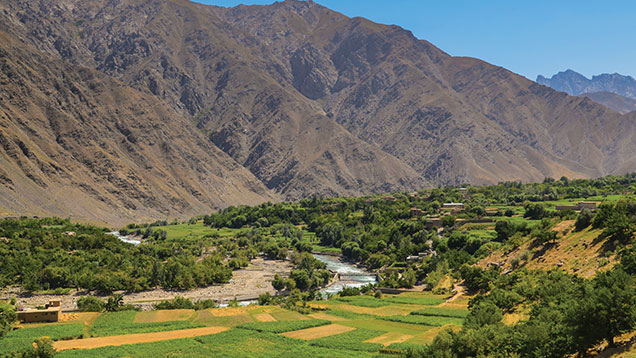 From the town of Pawat, Lucas and his party made the four hour hike up steep mountain trails to arrive at the mining camp by sunset. Lucas describes the spectacle: “I had a most unusual serenade that evening – the wind whistling through the mountains, punctuated by dynamite blasts from the mines.” 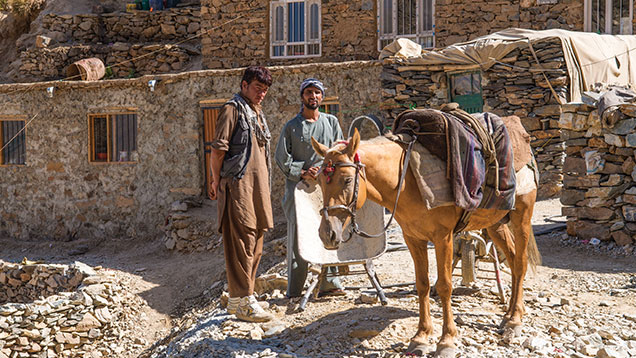 Miners who work in the Panjshir Valley live in homes built into the mountainside. Courtesy of Andy Lucas.

An adventurous spirit, Lucas went into the tunnels to see the mining and ore processing operations. A diesel-powered drill was used to make holes in rock, and charges were placed in them to remove the overburden without destroying emeralds – no easy feat!

A team of workers broke apart promising specimens with hand tools, and washed the pieces in search of emeralds. The rough emeralds were sent to Kabul, where they were traded and sold on Chicken Street, an avenue that earned its name because it once was the place to buy and sell poultry. 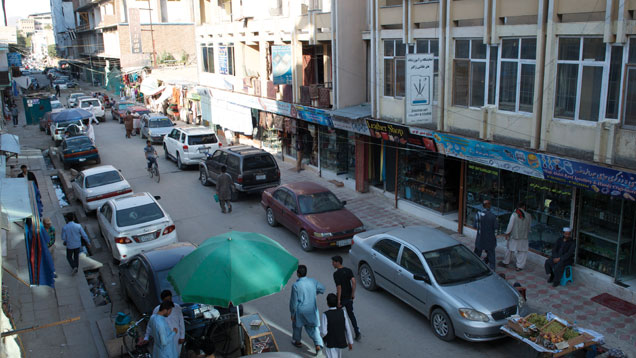 First a chicken market and later a place to buy antiques, Chicken Street is now the center of Afghanistan’s gem business. Courtesy of Andy Lucas.

Emerald mining in Afghanistan is a mutually beneficial affair. Food and equipment are provided by the mine owners, but profits are divided so that the miners eventually become part owners of the mines.

Eventually, emerald rough from Afghanistan is sent to cutting centers like India, where it is turned into fine jewelry. The beauty of Afghanistan emeralds lies in its excellent color: a rich, deep green that rivals any source. Even smaller crystals feature color that is immediately noticeable. Due to the shape of Afghanistan emeralds, less stone is lost when they are cut, yielding some truly breathtaking specimens. And when longer pieces of emerald rough (which look like pencils) are found, they can be cut and used in  watches. 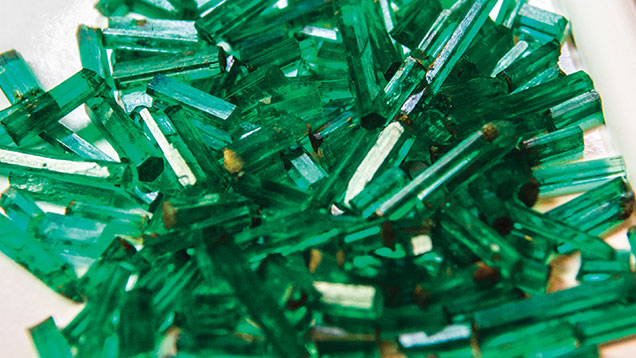 These emeralds, mined in the Panjshir Province, are called “pencils” because of their shape. Courtesy of Andy Lucas.

Thanks to intrepid field gemologists like Andy Lucas, Afghanistan emeralds continue to make a name for themselves. Perhaps the next time you look inside a jewelry case, you’ll be face to face with an emerald from this distant land.

Andy Lucas stands in front of the Panjshir River. He travels around the world on behalf of GIA to research mining centers. Courtesy of Andy Lucas.

To read more about gemological expeditions by Andy Lucas and other field gemologists around the world, please visit gia.edu