Like love, antique engagement rings never go out of style. Countless lovers have exchanged fede, claddagh, gimmel and toi et moi rings. They can be the perfect way to express your feelings for your partner and make both your hearts beat a little faster.

Clasped hands are a sweet way to show that two lives have been joined. The fede ring has two clasped right hands to symbolize friendship, or the bonds of marriage. Fede (pronounced fey-dey) is Italian for “trust” and  is an antique engagement ring style that has its beginnings dating back to the days of the Roman Empire. It became so popular that Fede rings were worn through 18th century Europe. 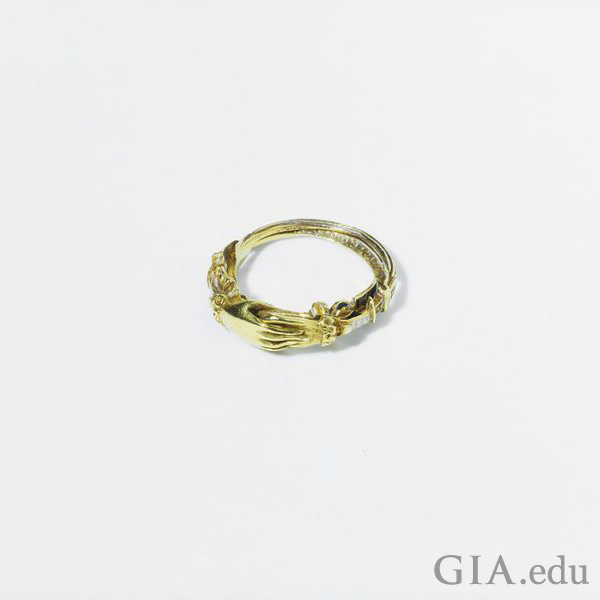 A fede ring (circa 1600) is engraved with words from the New Testament: “What God has joined together, let no man put asunder.” The two clasped hands symbolize love, union, and friendship. Courtesy: Victoria and Albert Museum, London 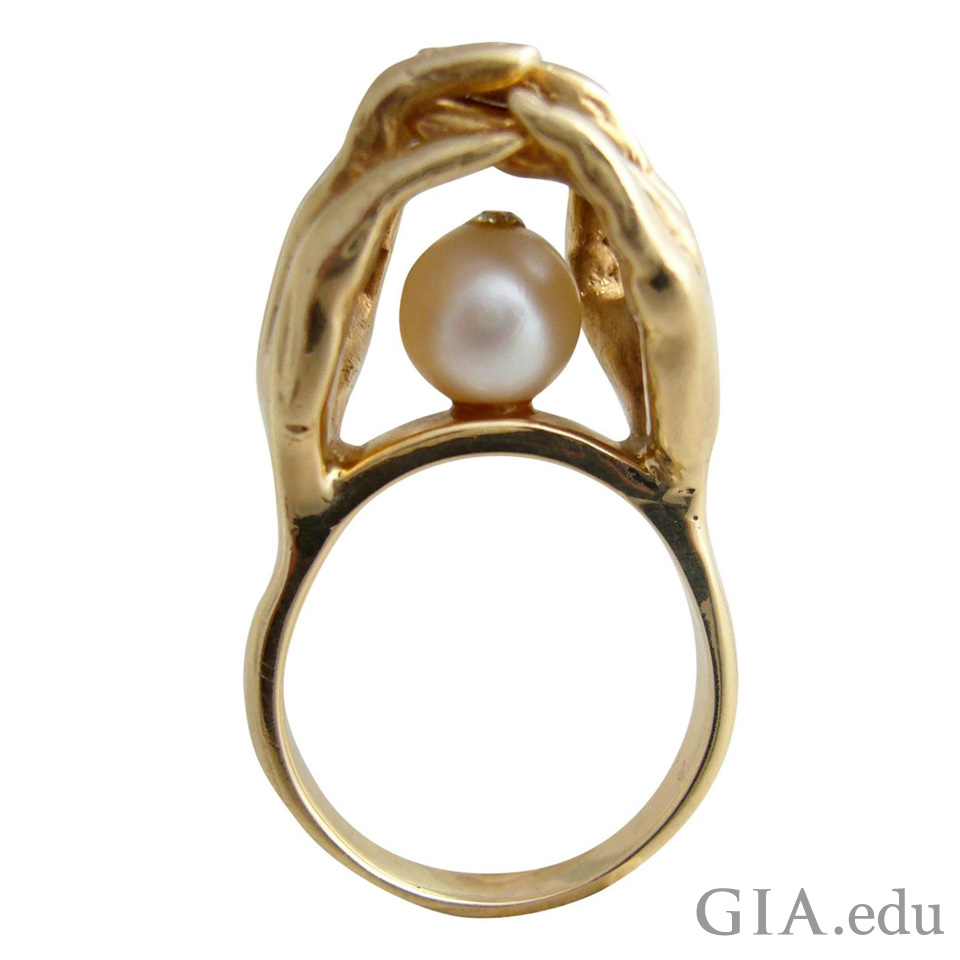 While this ring is not a traditional fede, it might have been inspired by the antique engagement ring style. This 1970’s gold ring has a left and right hand encompassing a pearl, possibly to symbolize love or friendship. Courtesy: 1stdibs.com

The Irish claddagh ring is an antique engagement ring style that is as popular today as it was centuries ago. The claddagh ring is similar to a fede ring in that it bears a related motif. In this style, two hands (one left and one right), symbolizing friendship, clasp a heart topped with a small crown, which symbolizes love and loyalty. The ring may be given as a token of friendship or love.

According to Irish tradition, the way the ring is worn sends a secret message. Wear it on the right hand with the tip of the heart pointing to the fingertip to signal you are single. Turn the ring so the heart faces in to show you’re in a relationship. Move the ring to the left hand to communicate your status as engaged or married. 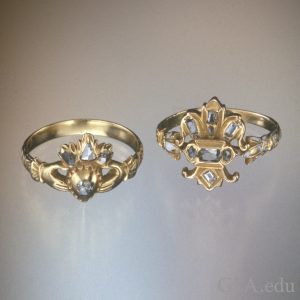 Two 17th century gold rings set with diamonds. The Claddagh ring (left) has two hands holding a crowned heart. A French ring (right) has a fleur-de-lis (lily) motif. The fleur-de-lis was used as an emblem by the Bourbon Kings of France. Photo: Harold & Erica Van Pelt/GIA

The image of clasped hands is one that transcends time; so is the heart. These elements of this antique engagement ring style can make their way into modern ring styles.

Gimmel comes from gemelli, which is Latin for “twins,” with the ring signifying the intertwining of two lives.

Possibly French in origin, gimmel (pronounced gim-uhl) rings were made of two or three separate rings that were linked together but could come apart to be worn separately. This antique engagement ring style gained popularity in betrothal rings during the Renaissance. Traditionally, each fiancé wore one part of the ring; the two separate rings were then reunited at the wedding ceremony and worn as one ring by the bride. Some gimmel rings had gemstones, however most did not. 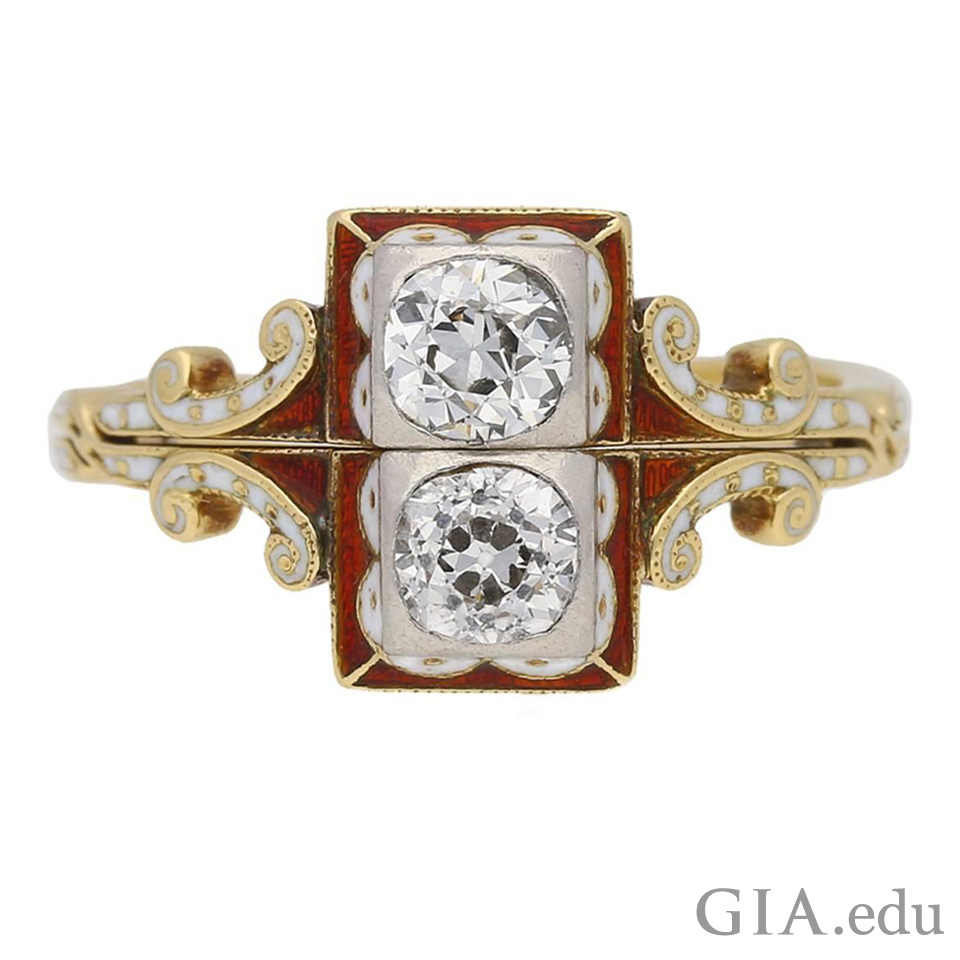 Made around 1900, this gimmel ring has two diamonds weighing approximately 0.60 carats total weight. The elegant scrolling shoulders show the ringmaker was paying homage to the architecture of the Renaissance. Courtesy: 1stdibs.com

From the 16th century onward, gimmel rings were crafted across Europe. Such was their popularity that they were even given by royalty. The Prince Regent who was the future King George IV (1762-1830) gave a gimmel ring to Mrs. Maria Fitzherbert (1756 – 1837) in 1795. Prince George continued his gestures of clandestine affection by giving her a Lover’s Eye.

The popularity of gimmel rings continued through the Victorian era and the Edwardian Era.

One modern interpretation of a fede ring is the toi et moi ring (you and me in French), which has one band with two gems – one to symbolize each spouse. The notion is exceedingly romantic, don’t you think? 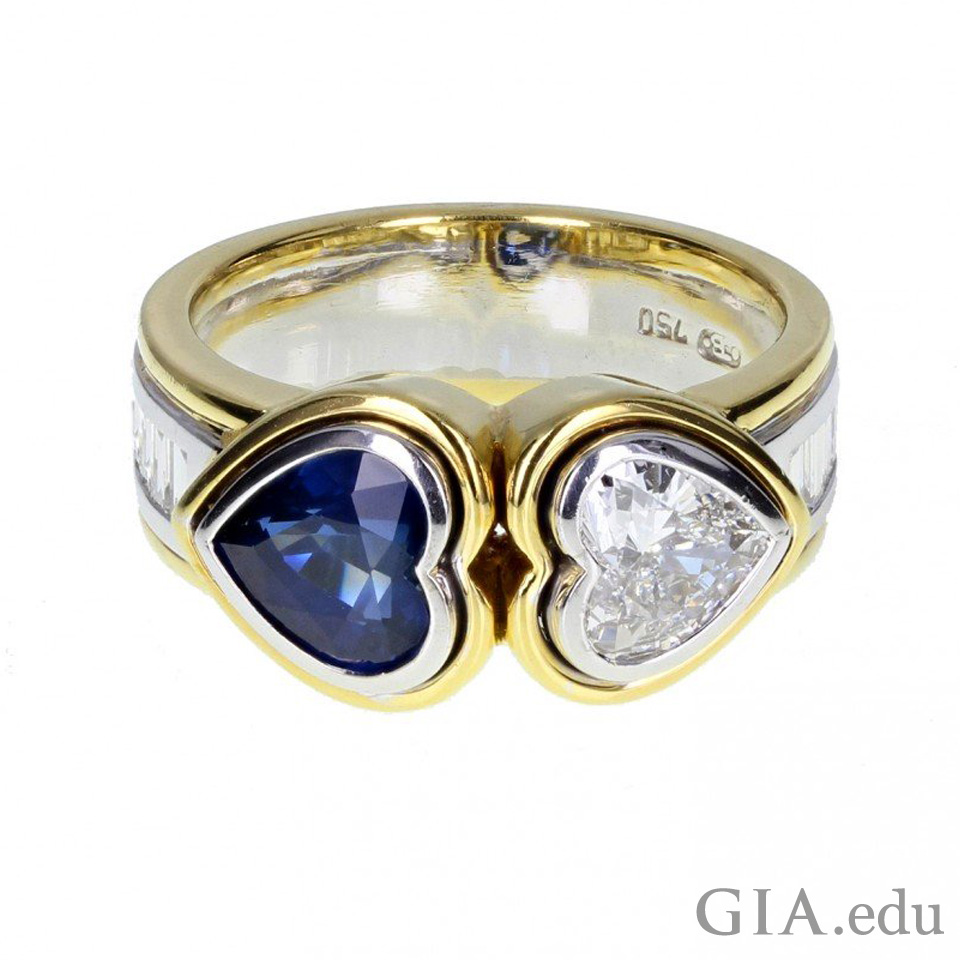 This contemporary twist on antique engagement rings ‘marries’ the heart motif of claddagh rings with the two stones typical of a toi et moi style ring. The ring features a heart-shaped diamond and sapphire bezel set on a wide white and yellow gold band that is channel set with baguette-cut diamonds. Courtesy: Trafalgar Jewellers

High-end jewelry houses like Boucheron and Chanel offer toi et moi rings. Auction houses may also use this terminology to describe two-stone rings of this style. 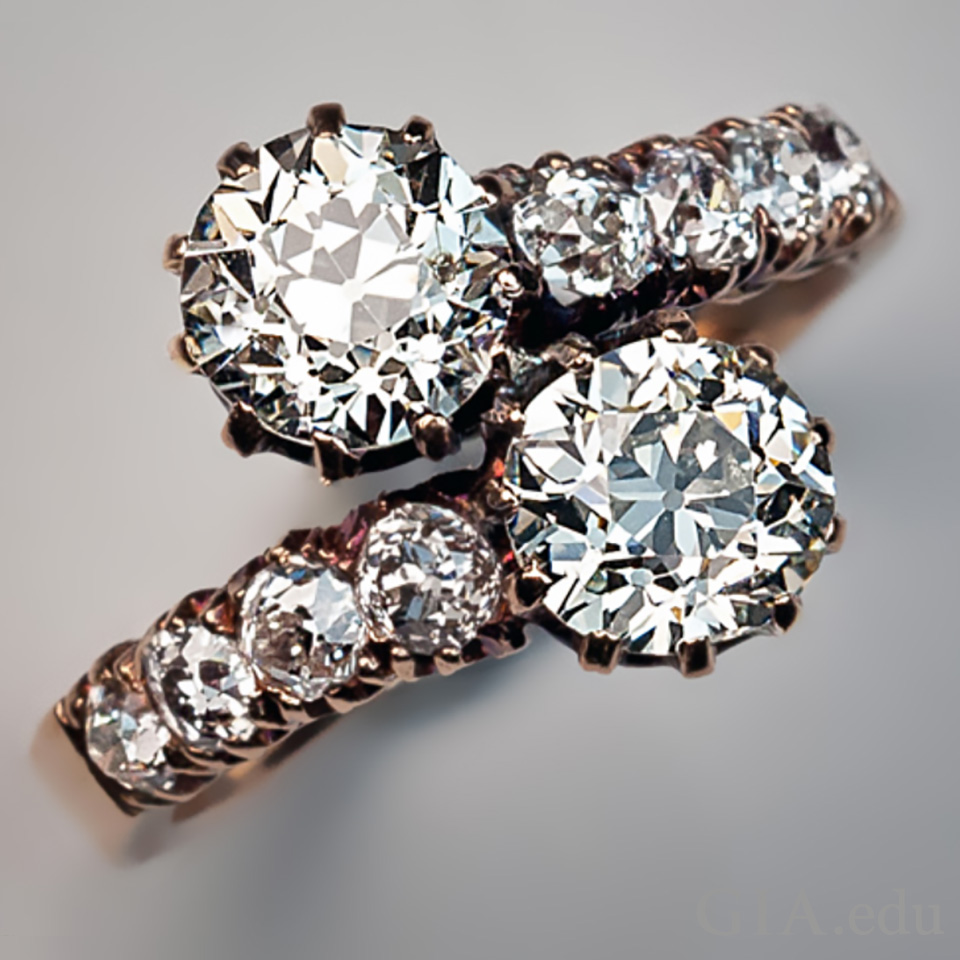 Antique engagement rings, and their contemporary counterparts, can be a creative and unconventional way to express your love for your life partner. The many antique engagement ring styles over the centuries give you an array of options. You can go shopping for one of these symbols of love, or borrow elements to create a custom engagement ring that captures the unique spirit of your love.

Ready to learn more about the engagement ring tradition? Explore our infographic on the History of the Engagement Ring.