July’s mesmerizing birthstone was called “the king of precious stones” in ancient India. It remains a fitting title today.

Like its sister gemstone sapphire, ruby is a variety of the mineral corundum. Corundum in its purest form is colorless. The trace element of chromium gives corundum a red hue, which can range from orangy red to purplish red. The more chromium found in ruby, the greater the intensity of the red color. 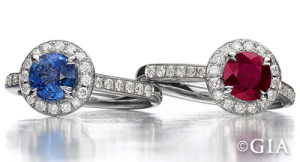 Sapphire and ruby are varieties of the mineral corundum. Image courtesy Hamilton Jewelers.

The history, legend and lore around rubies spans centuries. Warriors in Burma thought rubies made them invincible in battle. Ancient Hindus believed those who offered rubies to the god Krishna would be granted rebirth as emperors. And many medieval Europeans wore rubies to guarantee health, wealth, wisdom and luck in love. 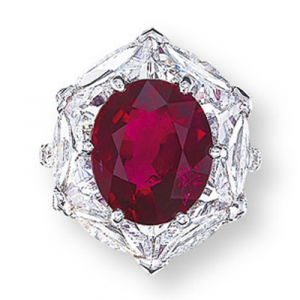 Ruby is most prized for its color. A pure, vibrant red to slightly purplish-red ruby is considered the most desirable. The purest, most intense ruby color has historically been called “pigeon’s blood”. These rubies have vivid color saturation, which is not too dark. Inclusions in a ruby affect its transparency. Inclusion-free rubies are practically nonexistent, so a ruby’s value partly depends on how visible its inclusions are. Fine-quality rubies over one carat are rare, but are highly prized. 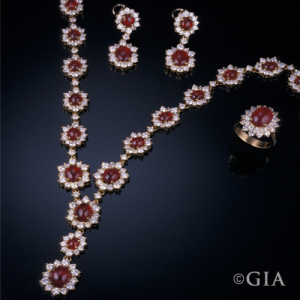 Treatments are often used to improve ruby’s color, and you can expect the majority of rubies to be heat-treated at the mine. Heating can render a more pure red color, and remove minute needle-like inclusions. Rubies may also be treated with a lead glass-like filling to lessen the visibility of surface-reaching fractures and make the gem more transparent than it really is.

Synthetic rubies are also widely available and at many price points. In fact, in the late 1800s ruby became the first gem to be created in a laboratory. If you’re considering a ruby purchase, expect your jeweler to disclose whether the gem’s been treated or lab-created. And if buying a ruby you might consider purchasing a ruby with a GIA Ruby Report, which will confirm that your stone is, in fact, a natural ruby, identify any known treatments, and even indicate its geographic origin.

Ruby is the most durable gemstone, with a hardness rating of 9 on the Mohs scale, so it is relatively easy to care for. Cleaning a ruby regularly with just a little mild soapy water and a soft toothbrush is enough to maintain its fiery luster.

What shade of ruby do you prefer?