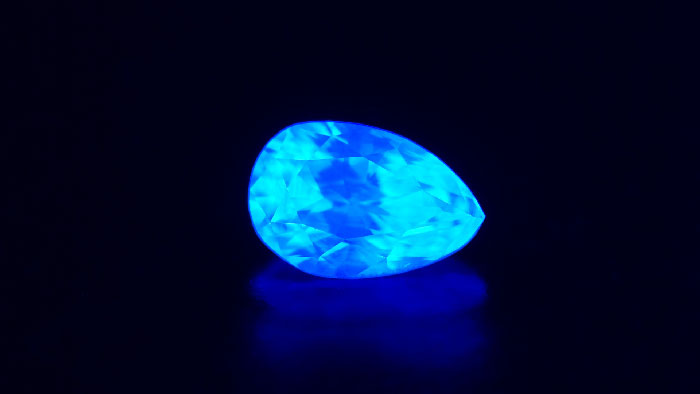 Fluorescence is the visible light some diamonds emit when they are exposed to invisible ultraviolet (UV) rays. On a GIA diamond grading report, fluorescence refers to the strength, or intensity, of the diamond’s reaction to long-wave UV, which is an essential component of daylight. The light emitted lasts as long as the diamond is exposed to the ultraviolet source.

Approximately 25% to 35% of the diamonds submitted to GIA over the past decade, exhibit some degree of fluorescence. However, only 10% of those show strengths of fluorescence that may impact appearance (i.e., strengths noted on laboratory reports as medium, strong or very strong). In more than 95% of the diamonds that exhibit fluorescence, the color seen is blue. In rare instances, the reaction is yellow, white or another color.

What impact does fluorescence have on the appearance of a diamond?

Does fluorescence compromise the structural integrity of the diamond?

No. A diamond that fluoresces has the same integrity as one with no reaction to UV. Submicroscopic substitutions and/or shifts in the diamond structure can cause fluorescence as well as prevent it. Nothing in either instance inherently weakens or is bad for the diamond.

HOW TO CHOOSE A DIAMOND

Learn about the 4Cs and how to choose a diamond.