Queen Elizabeth ascended the throne in February 1952, more than 60 years ago. When she was coronated a year later, she wore the ultimate symbol of royal authority – the Imperial State Crown.

This is the quintessential crown. Set with 2868 diamonds in silver mounts, it has an open work gold frame and is fitted inside with a purple velvet cap and ermine fur headband. The jewels mounted on the frame are breathtaking.

At the front of the crown is the Cullinan II – a cushion-shaped 317.4-carat brilliant, the second largest stone cut from the Cullinan diamond. Above it set in a cross paty sits the “Black Prince’s Ruby” – which is not a ruby at all but an irregular 170-carat cabochon red spinel. At the back of the crown is the Stuart Sapphire, a 104 carat oval-shaped sapphire . Along the headband, these 2 stones are separated by 8 step-cut emeralds and 8 sapphires, between 2 rows of cultured pearls. 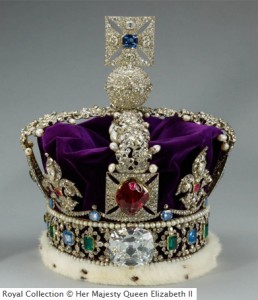 There are 2 arches above the headband and velvet cap. At the base of the 3 remaining arches, the crosses are mounted with step-cut emeralds. The arches are molded as oak leaves with diamonds and seed pearl acorns. As the arches reach up and over the velvet cap, underneath the intersection, it is mounted with 4 drop-shaped pearls called Queen Elizabeth’s Earrings. The base of each arch is separated by 4 fleur-de-lis, each set with sapphires, rubies and diamonds.

The top piece on the crown is an orb called a “monde”, of fretted silver, pavé-set with small round brilliants. The cross paty above it is set with “St. Edward’s Sapphire,” an octagonal rose-cut sapphire. Engraved small metal plaques have been placed behind the Black Prince’s Ruby and the Stuart Sapphire to commemorate the history of the crown.