Clarity characteristics on a gemstone’s surface are called blemishes. Inside the stone, they are referred to as inclusions.. This post will focus on inclusions and how they are important factors to gem and jewelry professionals and consumers.

Inclusions can be very small, but they mean a lot. In general, the fewer inclusions, the greater the desirability.

Inclusions can help gemologists determine if a gemstone is natural or synthetic (man made). That’s because natural gemstones and synthetic gemstones can have characteristic inclusions. Depending on growth method, some synthetics contain inclusions that can be confused with their natural counterparts. 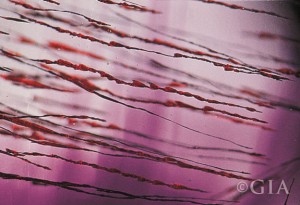 The most common inclusions observed in the Nigerian amethyst examined were deep red needles of hematite (magnified 10x). Photo by John Koivula/GIA.

Inclusions that may be seen in natural gemstones include needles, clouds, fluids, and crystals. The inclusions can be gas, liquid, liquid with a gas bubble, and solid matter, and are often created when a crystal grows rapidly, causing it to trap other material. For example, the mineral corundum, of which ruby and sapphire are varieties, has long, needle-like inclusions. Red tourmaline has many internal fractures that are usually gas filled and give mirror-like reflections. These natural markers can help gemologists make authoritative assessments about a gem’s identity.

Synthetic gems generally have inclusions specific to their method of growth. Characteristics of inclusions in synthetic gemstones include translucent to opaque coloring, coarseness, and a web-like appearance. Synthetic spinel, synthetic ruby and synthetic sapphire, for example, have small spherical gas bubbles that do not occur in natural gemstones.

Inclusions are also responsible for some of the most amazing features we see in gemstones.  For example, inclusions that are aligned can cause gemstones to exhibit phenomena, like aventurescense, play-of-color and chatoyancy. And sometimes, inclusions in certain gems can provide gemologists with clues as to where the gemstone was formed, such as emeralds from Colombia and rubies from Burma.

This chevron type of growth structure is indicative of the synthetic origin of this aquamarine. Photo by Nathan Renfro/GIA.

So let’s show inclusions some respect: they may be small, but they can make a huge difference in how gems are identified.