Explore Christie’s auction of “The Private Collection of President and Mrs. Ronald Reagan” to learn more about the jewelry and style of Nancy Reagan, one of America’s most well-known first ladies.

More than 700 pieces from “The Private Collection of President and Mrs. Ronald Reagan“ were sold during a live auction September 21-22 and an online auction September 19-28 during Christie’s Americana Week in New York. In addition to presidential memorabilia, decorative porcelains, books and photographs, the collection included jewelry and handbags worn by the former first lady, Nancy Reagan. The USD$7.2 million in proceeds from the sale will benefit the nonprofit Ronald Reagan Presidential Foundation and Institute. 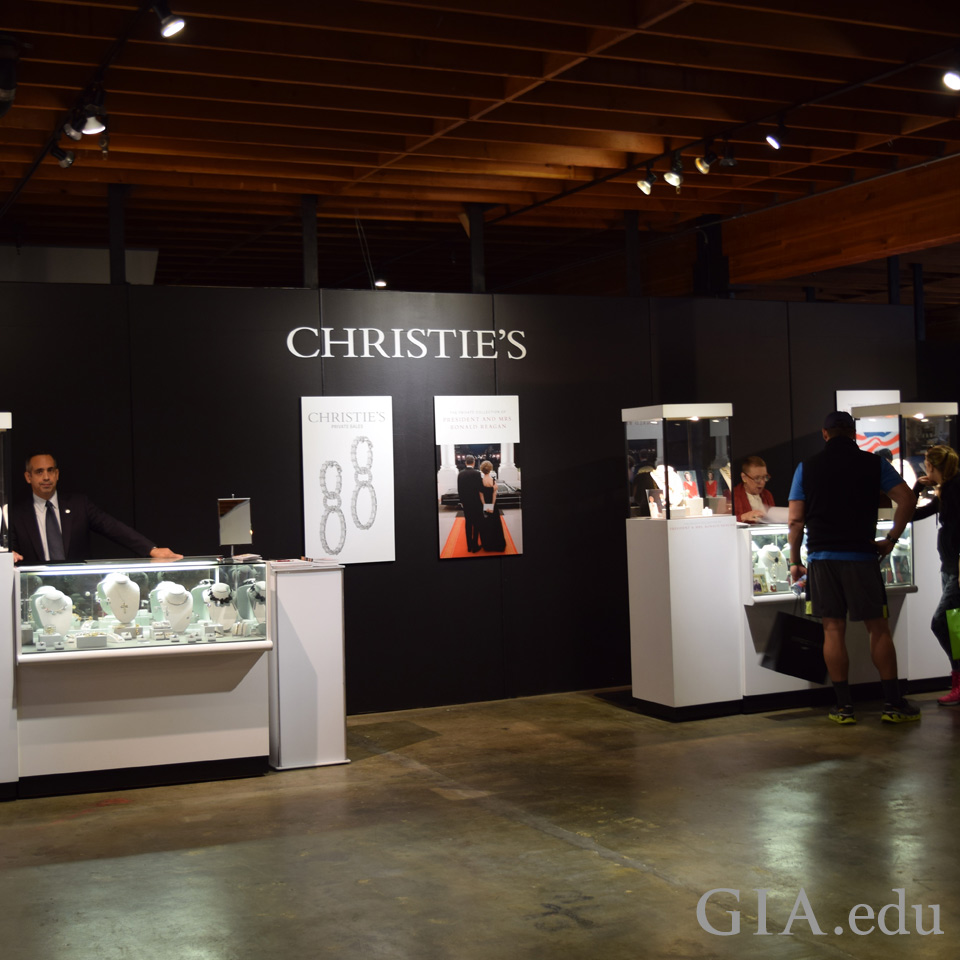 If you love jewelry and history, the jewelry worn by America’s first ladies provides a unique glimpse into their personalities and styles. Christie’s auction preview in August was a rare opportunity to meet Christie’s jewelry specialists to learn more about Nancy Reagan and her jewelry. They shared the reason behind the preview location, the pieces chosen for the live auction and other interesting anecdotes.

Christie’s selected Carmel-by-the-Sea, on California’s Monterey Peninsula, as the host city to showcase “The Private Collection of President and Mrs. Ronald Reagan”. Carmel-by-the-Sea is known for its scenic 17 Mile Drive and the fairways of Pebble Beach Golf Links, home to the U.S. Open Championships. The auction preview coincided with Monterey Automotive Week and the famed Pebble Beach Concours d’Elegance, an annual gathering of rare and antique automobiles that attracts car enthusiasts from around the world. The venue and events were a sure draw for celebrities, tourists and automobile aficionados. 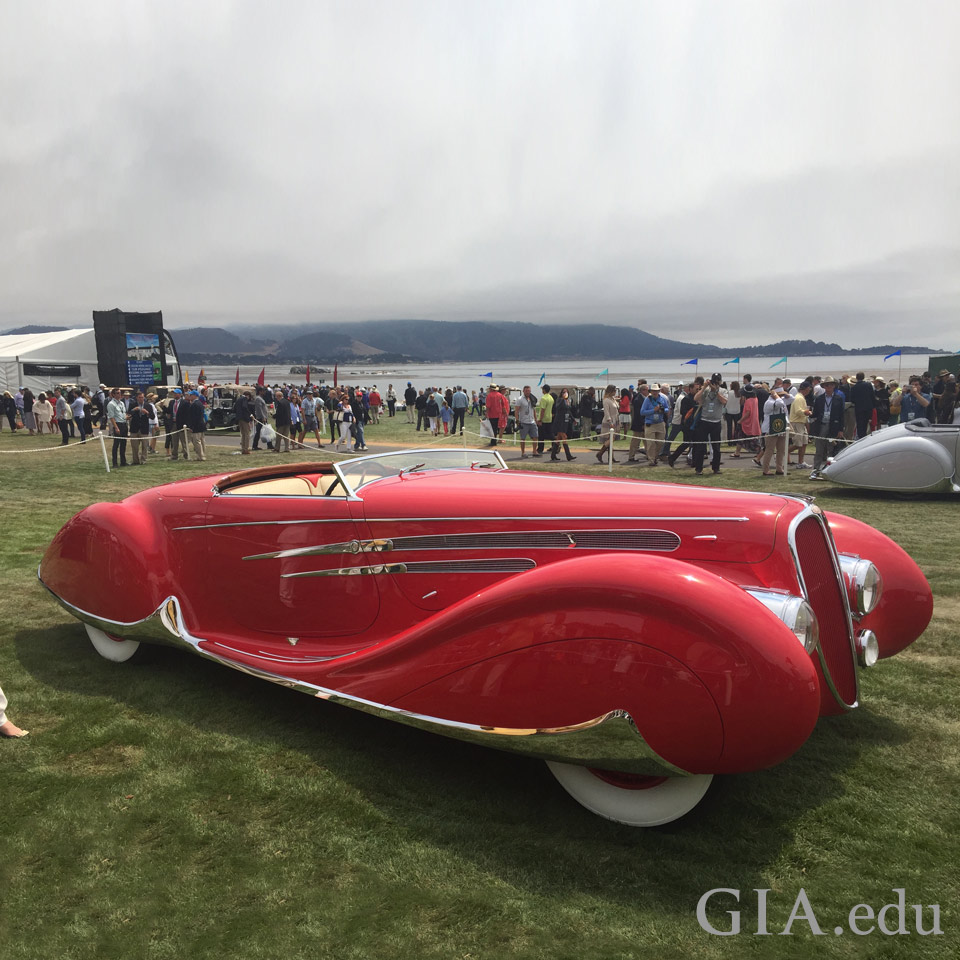 “We select where we’re going based on the clientele,” said Tom Burstein, senior international director for Christie’s jewelry. According to Burstein, people who are in the market for collector cars are likely also connoisseurs of fine art and jewelry, so Christie’s chose to display over 40 pieces from the collection in a sleek and exclusive Aston Martin showroom.

More than 2,600 guests strolled through elegantly appointed cases that featured Nancy Reagan’s jewelry alongside framed photographs that depicted her duties as first lady and the essence of her understated style.

Peggy Gottlieb, vice president and director of jewelry for Christie’s in Los Angeles, along with New York based specialists Caroline Ervin and Jaqueline Hausler, worked with archivists from the Reagan Library to locate photographs of Mrs. Reagan wearing jewelry from the collection. “Every piece is wearable,” Peggy commented, “and she wore every piece. Mrs. Reagan had great style, elegant taste and this was very much reflected in her collection of jewelry.”

Hollywood Style in the White House

Nancy Reagan brought her classic Hollywood style to the White House, sometimes selecting bold and bright statement pieces for events with key political figures. Women in the political spotlight have often worn jewelry to make a statement or set a tone. For example, Madeline Albright, former secretary of state, is well known for using her pins and brooches as part of what she called her “personal diplomatic arsenal” to convey diplomatic messages. 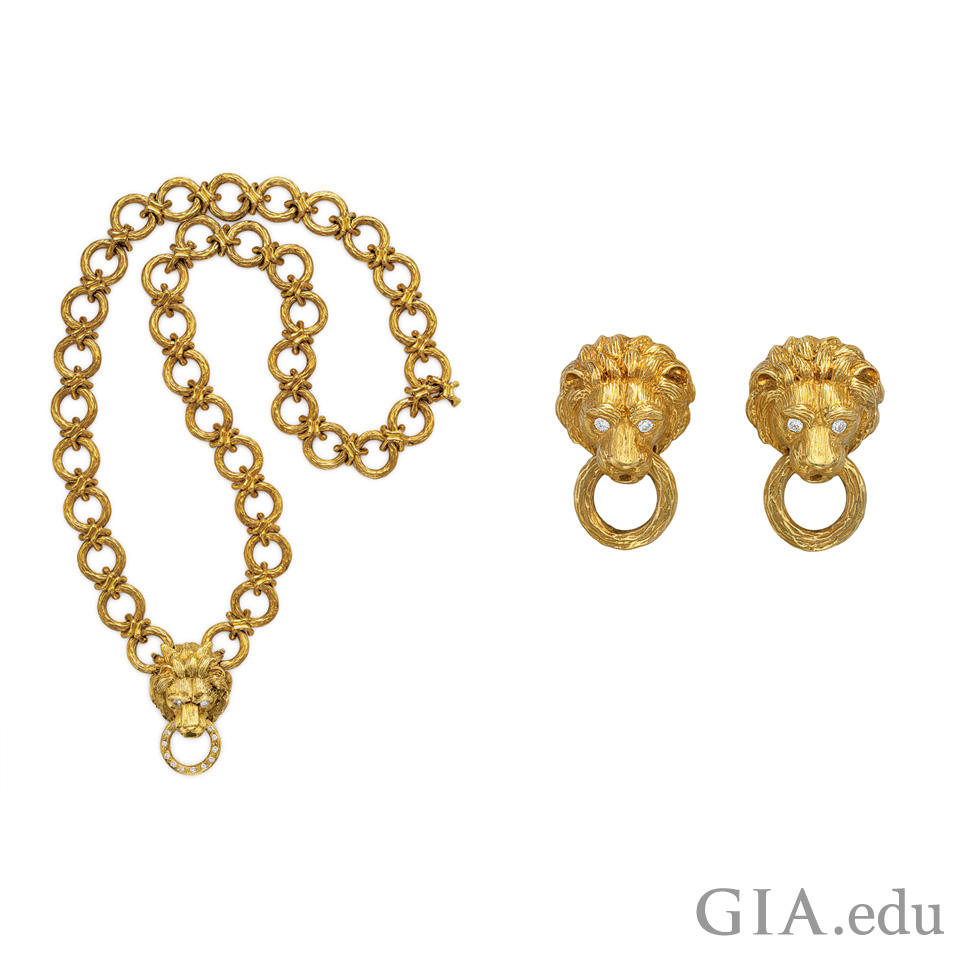 Stately lions, often the symbol of England, proclaim authority in this 18K gold and diamond lion necklace with detachable brooch and matching ear clips by Van Cleef & Arpels. Was Nancy Reagan sending a diplomatic signal when chose to wear this suite on a state visit to the United Kingdom to meet with former Prime Minister Margaret Thatcher? We will never know. Courtesy: Christie’s

Nancy Reagan was often seen wearing red, the signature color of the Republican Party. Political affiliations aside, the color conveys warmth and energy. And, when paired with gold, it makes for a lasting impression. This William Ruser brooch features red coral and diamonds mounted in platinum and 18K gold. The 18K gold basket weave evening bag features a diamond clasp. Courtesy: Christie’s

Nancy Reagan assumed many roles as actress and first lady, but her main part was playing Mrs. Reagan. “My job is being Mrs. Ronald Reagan,” she once said. 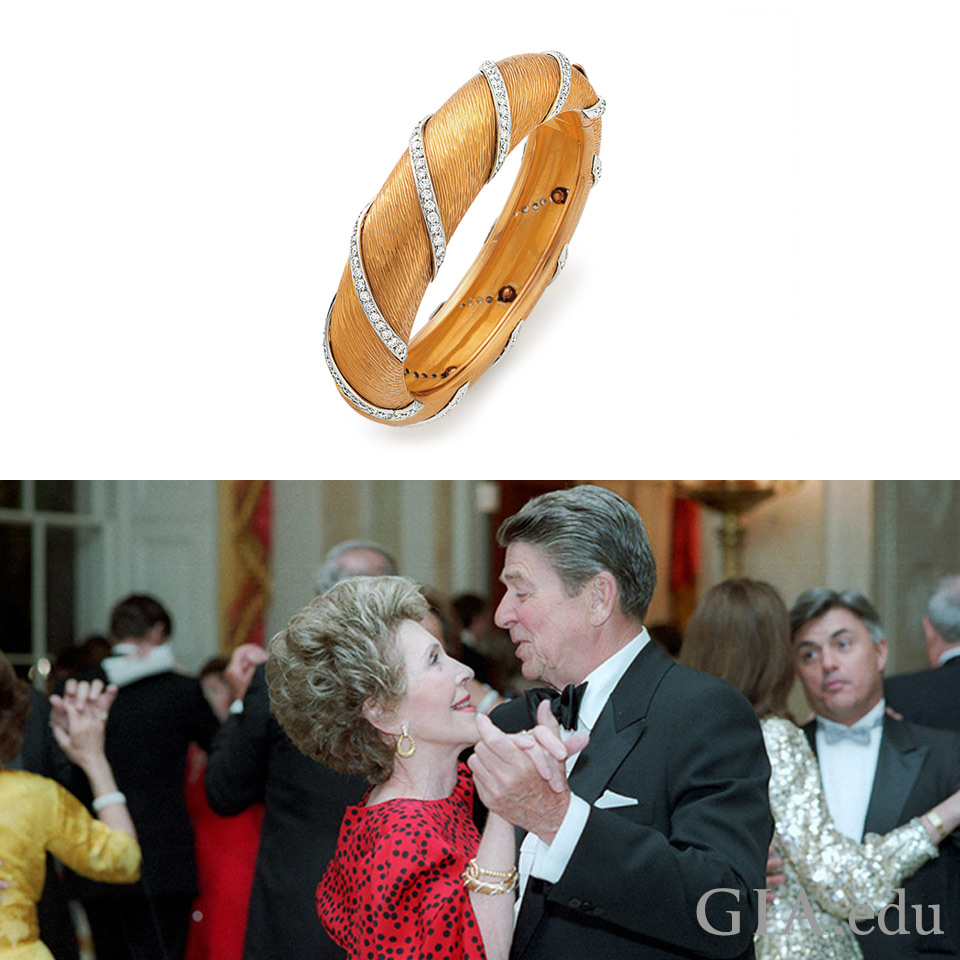 The president and Nancy Reagan spent much of their married years in the limelight and their love for each other was often apparent. Photos of the couple often show them gazing devotedly at one another during state dinners and public addresses. Actor Charlton Heston, a friend of the Reagans, once remarked that that theirs was ”probably the greatest love affair in the history of the American presidency.”

A polished politician, Ronald Reagan was also quite the romantic, often surprising his wife with love letters and fine jewelry. 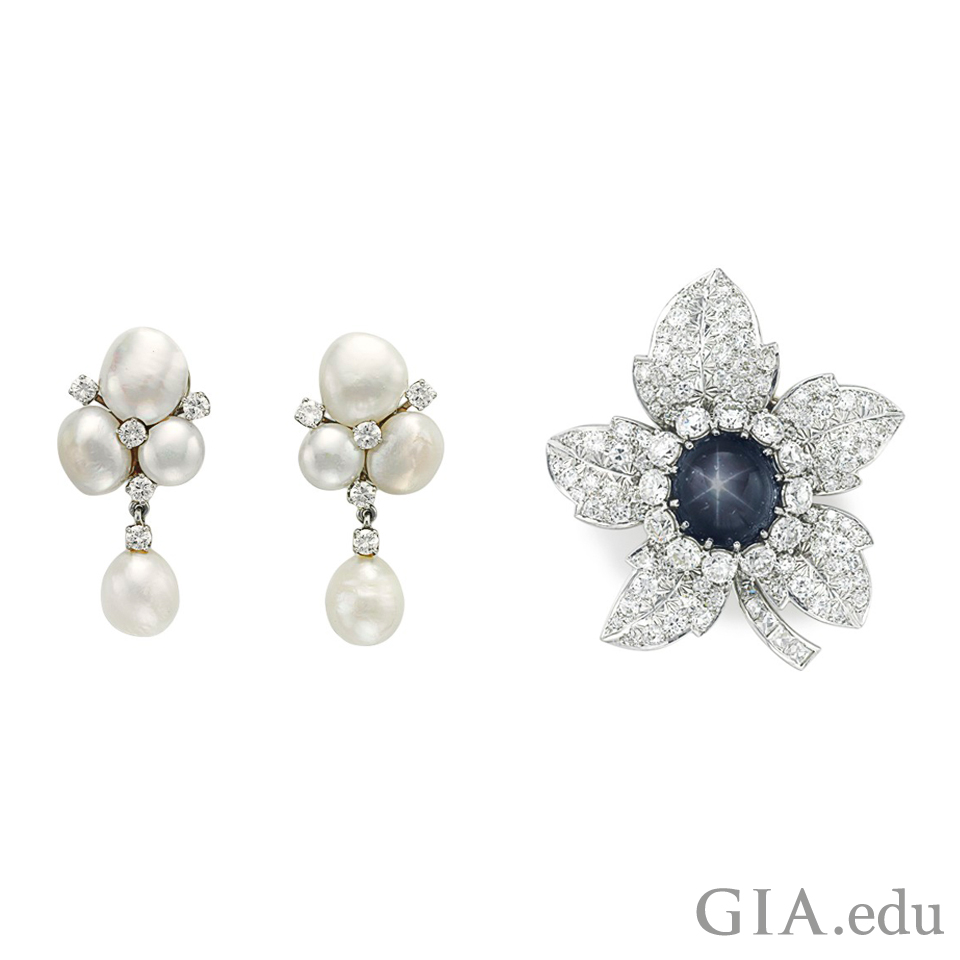 Romantic and timeless, these cultured freshwater pearl and diamond ear clips by Hollywood ”Jeweler to the Stars,” William Ruser, and black star sapphire and diamond flower brooch remind us of the endurance of the couple’s 52-year love affair. Courtesy: Christie’s

We asked Christie’s Tom Burstein what he thought was most significant about the collection: “I think in various ways it epitomizes how jewelry is symbolic of love.”

While President Ronald Reagan and first lady Nancy Reagan often spoiled each other with gifts demonstrating their love and devotion, the greatest treasure of all was their marriage. A quote attributed to Nancy Reagan says: “We haven’t been careless with the treasure that is ours — namely what we are to each other.”

For many couples, a gift of jewelry is a way to express love and commitment for each other. It can be given to mark a special occasion like the birth of a child or a landmark anniversary. Whether you’re newly married or celebrating a milestone anniversary like years 21–60, a romantic gift of jewelry or gemstones can help you express how you feel for your partner.