Pay close attention the next time you see a First Lady wearing jewelry: she may be using it to send a message.

America’s First Ladies undoubtedly wear jewelry to look stylish, but sometimes they choose pieces to make a statement. Former Secretary of State Madeleine Albright said something a First Lady might have uttered: “Jewelry had become part of my personal diplomatic arsenal…I do believe the right symbol [jewelry] at the correct time can add warmth or needed edge.” Jewelry revealed her diplomatic intentions, the context of the negotiations, and the ultimate goals.

Let’s celebrate President’s Day by taking a look at the jewelry worn by a few First Ladies, to see if we can interpret the possible symbolism behind the pieces.  Of course we can’t be sure of their intentions, but it’s a fun game for jewelry buffs to play nevertheless. 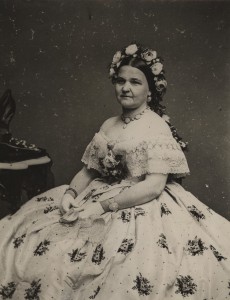 Mary Todd Lincoln (First Lady from 1861 to 1865) was known for being a fashionable woman. (She was also the first to be referred to as the “First Lady” in the press. ) For his inauguration in 1861, President Abraham Lincoln purchased for her a necklace and pair of bracelets from Tiffany & Co. (seen in the above photo). Instead of buying a full suite of jewelry, Lincoln purchased a demi-parure for a total of $530 (the same purchase today would cost approximately $12,500). A demi-parure is part of a set; a parure is the full set, which might include earrings, a necklace, a brooch, bracelets, and a ring.

Her choker featured seed pearl rosettes.  The rosettes were made by placing seed pearls, strung with horse hair, on a mother-of-pearl base. The smaller seed pearls surrounded larger seed pearls in the center of the rosette. The choker’s design motif was repeated in the bracelets,.

Seed pearl jewelry was popular in the 1800s, likely feuled by a healthy production of pearls by mussels in American rivers. Mrs. Lincoln would have been wearing very modern pieces, which may have symbolized her husband’s progressive outlook on the social and political issues of the day. 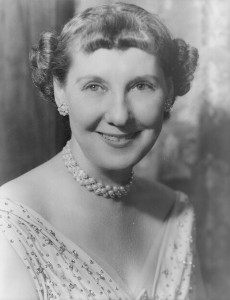 In 1957, Mamie Eisenhower (First Lady 1953 – 1961) received this diamond, pearl, and gold bracelet from Habib Bourguiba, the Premier of Tunisia.  Bourguiba was considered a progressive reformer and his gift to the conservative Mrs. Eisenhower was a more traditional design featuring rose cut diamonds. We can only guess at what the jewelry was meant to symbolize: stability during the unpredictable years of the Cold War; perhaps something that symbolized the ancient culture of Tunisia. Or, maybe it was simply a generous gift. 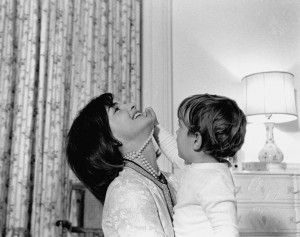 Pearls have been a popular choice of First Ladies. At least 14 out of 44 wore them in their White House portraits, the first being Angelica Singleton Van Buren (1818 – 1877).

Jackie Kennedy’s (First Lady 1961-1963) contemporary  fashion style  reflected the new era of the new president, John F. Kennedy. Simulated pearls were a favorite of hers, and as later with First Lady Barbara Bush, Mrs. Kennedy made them look elegant and modern – echoing the promise of the new presidency. Pearls were also steeped in history, and by wearing them Mrs. Kennedy might have been paying respect to her predecessors and the continuity of the democracy. 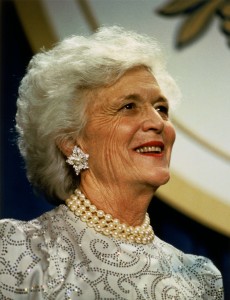 Barbara Bush (First Lady from 1989 to 1993) dressed elegantly, but was also down-to-earth and unaffected. She often wore  faux pearl necklaces which were a fitting choice to convey this message.

Mrs. Bush was  actively involved in charities that helped the needy, and if she had been wearing cultured pearls, it may have appeared at odds with her philanthropic work. American costume jewelry designer Kenneth Jay Lane made her imitation pearl necklace, which was another way for the First Lady to make a patriotic statement. 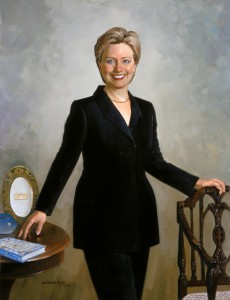 First Lady Hillary Rodham Clinton (First Lady 1993-2001) has worn the ring featuring the 4.25 carat rough Kahn Canary diamond to Governor Bill Clinton’s gubernatorial inauguration and to both of President Clinton’s presidential inaugurations. Named after its owner Stan Kahn, the diamond came from the Crater of Diamonds State Park, Murfreesboro, Arkansas, so it is safe to assume Mrs. Clinton was showing her pride in her adopted state. Henry Dunay, an American designer, created the Arkansas-inspired ring, and Mrs. Clinton’s choice was a way for her to make a patriotic statement. 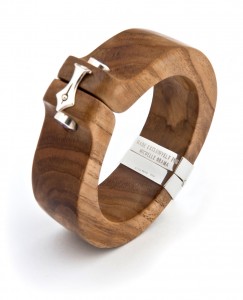 Michelle Obama (First Lady, 2009 – present) has earned a reputation for being a jewelry aficionado. Women’s Wear Daily, The Huffington Post, and StyleBistro are just a few of the media outlets that have chronicled her choices.

Mrs. Obama has a history of using jewelry to make a statement. The Chief of Protocol’s office asked American designer and GIA graduate Kara Ross to make wood jewelry out of a tree that had fallen on the White House lawn.  Mrs. Obama gifted these eco-friendly pieces to heads of state, perhaps sending a message about the environment?. The pieces may also have symbolized close ties with other nations, for these leaders literally had a piece of the White House.

Our brief look at the First Ladies and the jewelry they wore may give you a new perspective on the symbolic weight of jewelry. Don’t be surprised if you start looking more closely at public figures to try to read between the lines what “statement” their jewelry might be making.