Like the famous Elizabeth Taylor Diamond, the Taylor-Burton Diamond was another of Richard Burton’s extravagant gifts to wife Elizabeth Taylor during their public and tumultuous marriages. The couple’s emotionally-charged private life often drew as much attention as their movie roles, and their luxurious tastes, Taylor’s love for diamonds especially, were legendary. 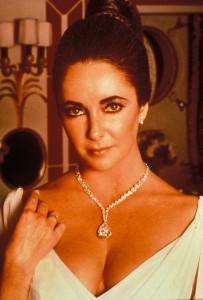 The diamond that would ultimately become the Taylor-Burton was discovered at the Premier mine in South Africa in 1966. Harry Winston purchased the rough crystal, which weighed 240.80 carat (ct), and it yielded two diamonds when it was cut. The largest, a 69.42 ct pear shape diamond graded by GIA as E-F clarity, was sold to Mrs. Harriet Annenberg Ames.

In 1969, the diamond was sold at auction to Cartier for US$1.05 million after frenzied bidding. Burton, the under-bidder, negotiated a deal with Cartier over the phone to purchase the diamond for US$1.1 million, and the diamond changed hands a second time in less than 48 hours. Crowds lined the streets for the chance to catch a glimpse of the famous diamond before Burton picked up the gift for Taylor.

Taylor initially wore the diamond in a ring, but eventually had it reset into a necklace designed by Oscar Heyman for Cartier. She wore the stunning piece to Hollywood parties and events, including the 1970 Academy Awards. After her divorce from Burton, Taylor sold the necklace and donated part of the proceeds to help fund a hospital in Botswana. The Taylor-Burton diamond .