You’re an actor or about to propose to one. What kind of engagement ring are you going to get your stunning bride-to-be?

That was the pleasant problem recently facing George Clooney, Brad Pitt, Kanye West, Ashton Kutcher, Justin Theroux, and Romain Dauriac, just to name a few. Their engagement ring choices garnered a lot of press, so lets take a closer look at what these men of means picked, and provide a bit of gemological commentary.

Actor George Clooney gave his then-fiancée Amal Alamuddin, a barrister, a large emerald cut diamond, possibly over 7 carats, set in platinum with tapered diamond baguettes for the side stones, according to People Magazine. An emerald cut center stone is becoming a popular choice for an engagement ring. It’s a classic look with an understated elegance. 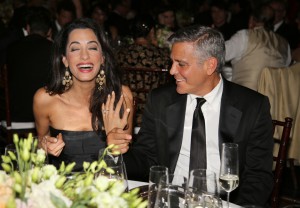 Emerald cut diamonds have beveled corners and long narrow facets in rows that run parallel to the girdle. This style is called step cut and usually has three concentric rows of facets on the crown and on the pavilion. Since step cuts do not hide imperfections as well as brilliant cuts, Clooney’s choice of diamond  may have been one with a higher clarity grade.

One half of this Hollywood power couple has an appropriately fantastic ring. Designed by Robert Procop in collaboration with Brad Pitt, there is speculation that the diamond is approximately 7 carats. The shape of the center stone is unclear, likely it is what Robert Procop, the designer of the ring, refers to as a ‘tablet cut’. Thought to be mounted in a platinum setting, and accented by smaller similarly cut diamonds. According to the designer, all of the diamonds were cut especially to fit Angelina’s finger. The ring is estimated to be worth $250,000 to $500,000. 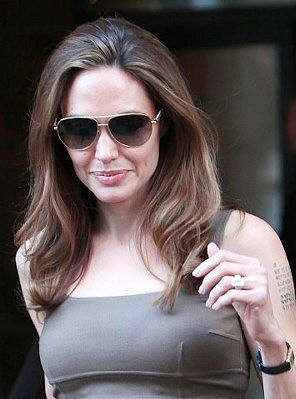 Kanye West is estimated to have spent somewhere between $3 million and $8 million on the 15 carat diamond ring he gave to television personality Kim Kardashian. West, the rapper/singer/songwriter/record producer/fashion designer/filmmaker collaborated with celebrity designer, Lorraine Schwartz, to design it. 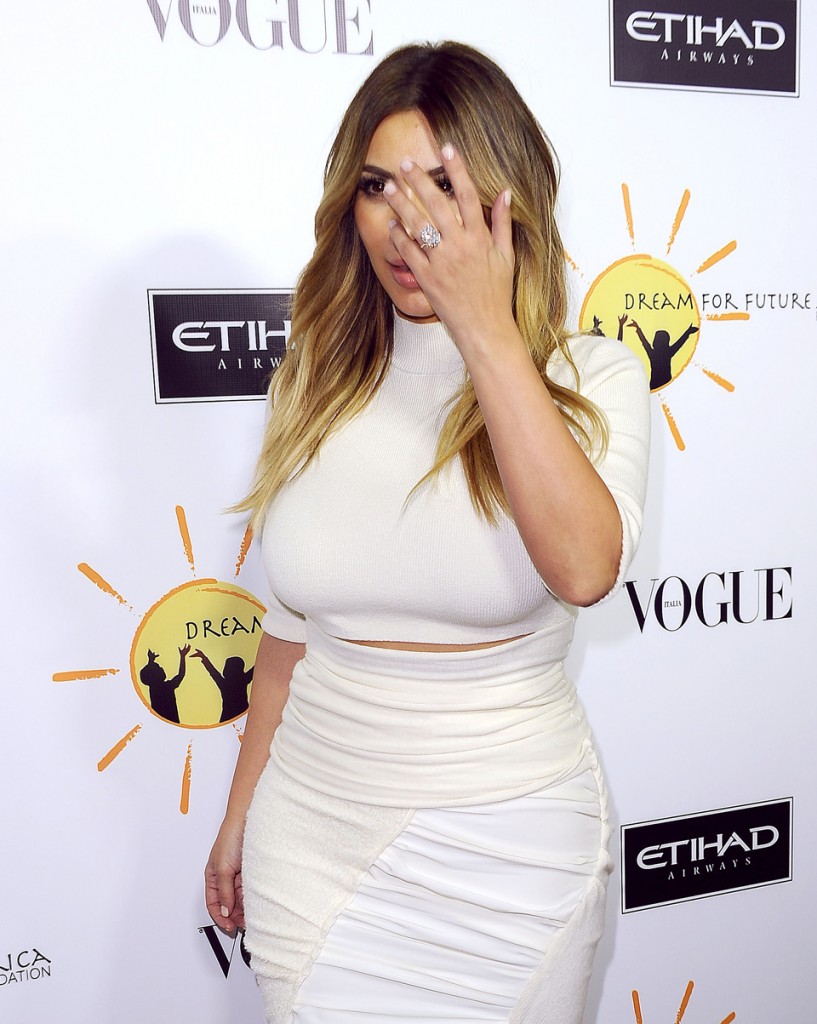 Diamond cutters have been using square brilliant cuts, the forerunner of today’s cushion cut, for centuries. It was – and remains – a popular choice for diamonds in engagement rings.

Mila Kunis and Ashton Kutcher
Actor Ashton Kutcher gave actress Mila Kunis a large, possibly round brilliant, diamond thought to be about 5 carats set in a white metal band of platinum or white-gold, says E! Online. The ring is estimated to be worth at least $250,000. 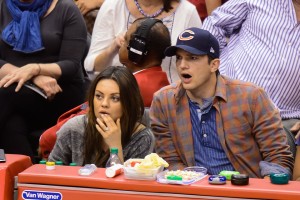 Here’s the anatomy of a round brilliant diamond – the most popular cut and the shape of the diamond adorning Kunis’ finger.

Actor, director, screenwriter Justin Theroux gave actor/actress Jennifer Aniston what may be an 8 carat diamond ring. In photos, the diamond appears to have rounded corners. The ring is estimated to be worth at least $500,000.

Jennifer Aniston wearing what may be an 8 carat diamond engagement ring from Justin Theroux. (c) FilmMagic.

Our unscientific sampling shows that  large diamonds set in white metal are in with Hollywood’s celebrity crowd. That’s no surprise considering the jaw-dropping beauty of these diamonds.

Regardless of fame or notoriety, you can still choose a gorgeous engagement ring that will  symbolizes the love you feel for the star in your own life. Here’s a look at some of the latest trends.