What makes a diamond famous? It might be the diamond itself, the story behind it or the people who’ve owned it. Today we kick off part one of our Famous Diamonds series, which will reveal the stories and secrets behind some of the world’s most extraordinary diamonds. First in the series is the 33.19 carat Elizabeth Taylor Diamond. 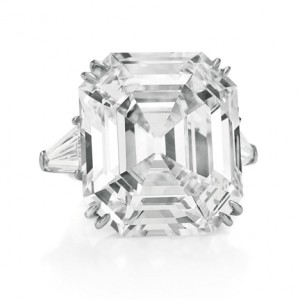 This cut cornered rectangular step cut, called an Asscher cut, was originally known as the Krupp diamond. The famous gem, which GIA graded as D color, VS1 clarity (potentially internally flawless), was cut in the early 20th century. The diamond is set in a classic Art Deco platinum ring, flanked by two tapered baguette-cut diamonds.

The ring was a surprise gift from Richard Burton to Elizabeth Taylor in 1968 and instantly became the most iconic piece in her jewelry collection. In 2011, it was one of the most anticipated items in Christie’s New York auction of Elizabeth Taylor’s jewelry. The diamond sold for an astonishing US$8.8 million – far exceeding its US$2.5-$3.5 million estimate.