Are you meditative, selfless, creative, compassionate, and born between February 19 and March 20? Then you are a Pisces – and you’ll probably want jewelry that celebrates your lovely personality traits.

Pisces comes at the end of winter, and the spring rains and new life may be the reason two fishes are its symbol. Then again, the ancient Romans thought the Pisces symbolized the escape of Venus and Cupid from the monstrous Typhon by turning themselves into fish. Some early Christians thought it to be a symbol of Jesus. Modern-day astrologers have their own interpretations, like the fish swimming in different directions showing the yin/yang aspects of the Pisces personality.

Although there are plenty of interesting astrological readings for Pisces, we share some of our favorites pieces inspired by the mysterious symbol.

These charming cufflinks by Deakin & Francis add a pop of color to any suit – and let a male Pisces send a subtle message about his astrological sign. Designed by GIA alumnae James and Henry Deakin, the sterling silver cufflinks also make clever use of the guilloché enameling technique.

Flying dragon fish earrings from the Ming Dynasty (1368-1644) are perfect for the creative spirit of a Pisces. Swooping lines and swirls on the fins create motion and energy in the design. Impressive details, like the scales on the head and filigree work on the tail should appeal to all – no matter your zodiac sign. 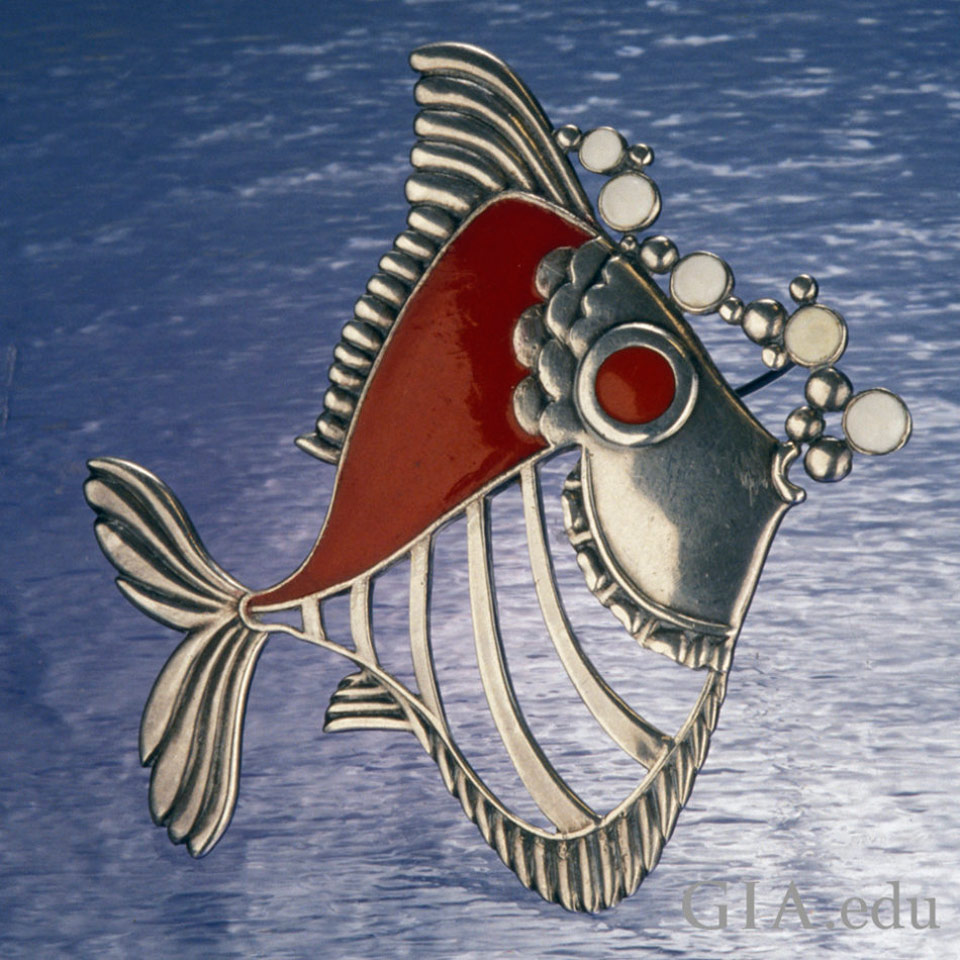 Just as zodiac signs come around once a year, fashion trends resurface every few decades. Design motifs that were popular in the 1960s and 1970s, like lighthearted and playful depictions of animals, have returned in Erik Magnussen’s contemporary enameled and sterling fish pin. Negative space in the bottom half of the design breathes life into the piece; an enameled finish on the top makes a colorful contrast.

Martha Ann Gilchrist’s three-dimensional fish aquarium is its own little world – something that would appeal to a daydreaming Pisces. A diamond-studded fish admires itself in a pear-shaped diamond and swims above gravel made of a rainbow of pink, green, orange, brown, and purple diamonds.

Two fish were carved out of watermelon tourmaline.

These two fish were carved out of watermelon tourmaline, and the cutter made creative use of the material’s natural color bands to create realistic objet d’art. Pisces sometimes swim against the current; while other times they float downstream.  Whatever direction they’re going, they seem quite content with their lives.

Every astrological sign has its unique charm and style, and Pisces certainly has plenty of both to spare.

Still in the mood for stargazing? See what we found when we looked to the heavens for Capricorn and Aquarius. Then check out more posts in our zodiac jewelry series: Aries and Taurus.