Since the bewitching season is upon us, it’s a perfect time to do a postmortem on poison rings – those devious jewels whose secret compartments supposedly held deadly contents. A shroud of mystery and rumor surrounds them, so their reputation is fittingly a mash-up of fact and fiction. 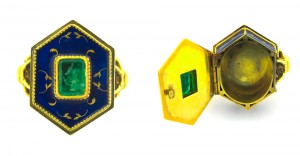 Originating in ancient India and the Far East, the poison ring eventually made its way to Europe. The traditional poison ring had a very small container hidden under a hinged cover.

Ancient Romans sometimes used poison rings to commit suicide when a painful death was unavoidable. The historian Pliny, the Elder (23-79 CE) recounts how a Roman government official escaped torture by taking a bite out of his poison ring (a thin shell was the container for the poison). The teenaged Emperor Heliogabalus (203 CE – 222 CE), feared because of his cruelty and notorious for his debauchery, wore a poison ring – but was assassinated before he could ingest its contents.

A poison ring may have also played a part in ending an aristocratic feud between two powerful families in the Middle Ages. In the 21st century, archeologists in Bulgaria unearthed a bronze ring with a secret compartment. It is theorized that poison in the ring may have been used by Dobrotitsa (1347-1386), the ruler of Despotate of Dobrudja, against an influential family in the Kaliakra fortress. 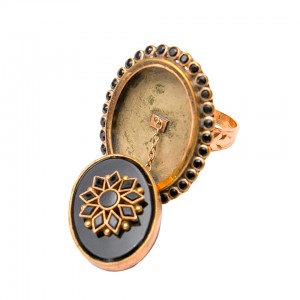 The appeal of poison rings (or secret rings) transcends centuries. This Victorian era ring is made of gold and onyx. Courtesy: 1stdibs.com

Poison rings – alternately referred to as pillbox, compartment, locket or vessel rings – also had a benign purpose. During the Middle Ages, they were often used to hide relics of saints, like bits of their hair, bone and teeth, which were thought to protect the wearer from various calamities and maladies. During the Renaissance, the aristocracy used them to hold cologne, locks of hair, and portraits of loved ones.

Lucrezia Borgia (1480-1519), an Italian noblewoman and only daughter of Pope Alexander VI, was said to be adept at using poison rings for disposing of political rivals. Experts note that disguising the taste of poison and making a dose powerful enough to be fatal but still fit in a ring was extremely difficult – so victims by this method of murder may have been few. 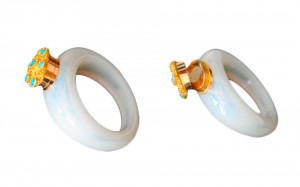 This poison ring (shown with the top closed and open) may have held perfume. It is special for two reasons: it is made of glass, and it belonged to Frances Elizabeth Appleton, the wife of the famed poet, Henry Wadsworth Longfellow . Courtesy: National Park Service, Longfellow House – Washington’s Headquarters National Historic Site.

With their dark and mysterious cachet, poison rings, are in fashion with the Goth set. Proof that the poison ring is still in vogue in high-end jewelry is this contemporary Secret ring by Boucheron. 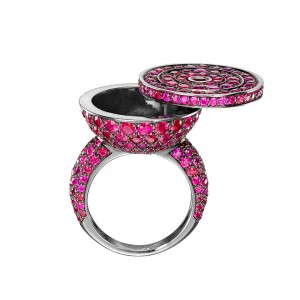 This Secret ring by Boucheron has 270 round brilliant cut rubies weighing 6.93 carats, mounted in blackened 18K white gold. The top of the ring is a flat disc that rotates which allows access to the hidden compartment. Courtesy: 1stdibs.com.

Fact and fiction are intertwined in the story of the poison ring. And perhaps that’s why they still have a hold on our imagination.

Dig dark jewelry? Then Rock & Roll jewelry may get your pulse racing.