The technique of enameling, or fusing glass in some form onto a metal substrate, is something we encounter every day – found in sinks, stoves, cookware, building cladding, and many other applications.  When used on jewelry, enameling becomes a work of craftsmanship that transforms an object of adornment into something beautiful.

The art of enameling is an ancient one, dating back to 1400 BCE, which flourished in Mycenae (1400 BCE), ancient Greece (600 BCE), the Byzantine Empire (8th – 12th centuries CE), and the 19th and 20th centuries. Enameled jewelry is no less popular today. As you shop for jewelry and encounter this technique, you should know that there are different methods of jewelry enameling. Here’s a quick primer:

A technique used in Mycenae and Greece, cloisonné includes the creation of metal cells and filling those cells with enamel which is in a ground, powdered form. The piece is then placed into a furnace where the enamel is melted. The enamel can also be melted  by using a hand-held torch. In the  Russian pendant pictured below, the artist made numerous cells to create the birds’ wings, tails, and heads. Each cell has different-colored enamel. 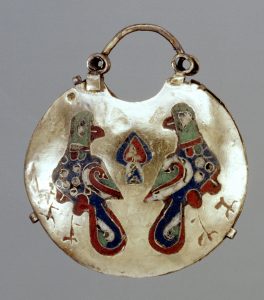 A 12th century Ukranian kolt, or temple pendant to be worn on a woman’s headdress. Frequently worn at wedding ceremonies; the lilies (center), birds, and seeds that fleck the birds’ breasts are all symbols of fertility. Photo courtesy of the Walters Art Museum, Baltimore

Instead of using raised cells to separate enamels of different colors as in cloisonné, with champlevé the artist will dig cells or lines in the metal and place the powdered enamel into the depressions. The piece is then fired and polished as seen in the pictured ring.

Champlevé can be used to add colorful accents to a piece of jewelry.

In the basse-taille technique, the artist makes cuts of varying depths into metal. Methods to do this include carving, engraving, and stamping. These layered cuts give the enamel different shades or tones of the same hue once it is fired. Green and blue enamels are favorite choices, as they show a palette of rich shades when used with basse-taille. 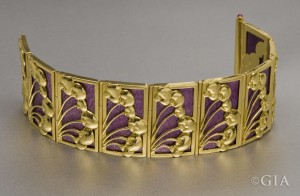 Plique-à-jour is a technique used to make enamel resemble stained glass. This is achieved by adding the enamel powder into a cell backed by a sheet of copper foil or a similar metal. The enamel is fired, and then the sheet is removed with a light tap or acid. The enamel that remains is shimmering and translucent. 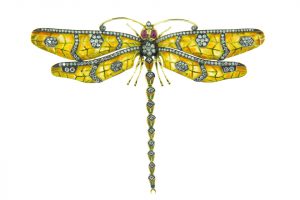 This enamel and diamond dragonfly brooch/pendant takes flight because of the artful use of plique-à-jour, which was used to create its wings. Photo courtesy Sinork Agdere “Lord Jewelry”

With the guilloché technique, a piece of metal is first placed on a lathe which cuts intricate patterns into the metal. This technique of cutting a pattern into the metals is referred to as engine turning.   The powdered enamel is then layered over the metal, and after firing, the transparent enamel  lets the design peek through. Peter Carl Fabergé’s workshop used this technique often when creating his famed Easter eggs, picture frames, cigarette cases, etc. 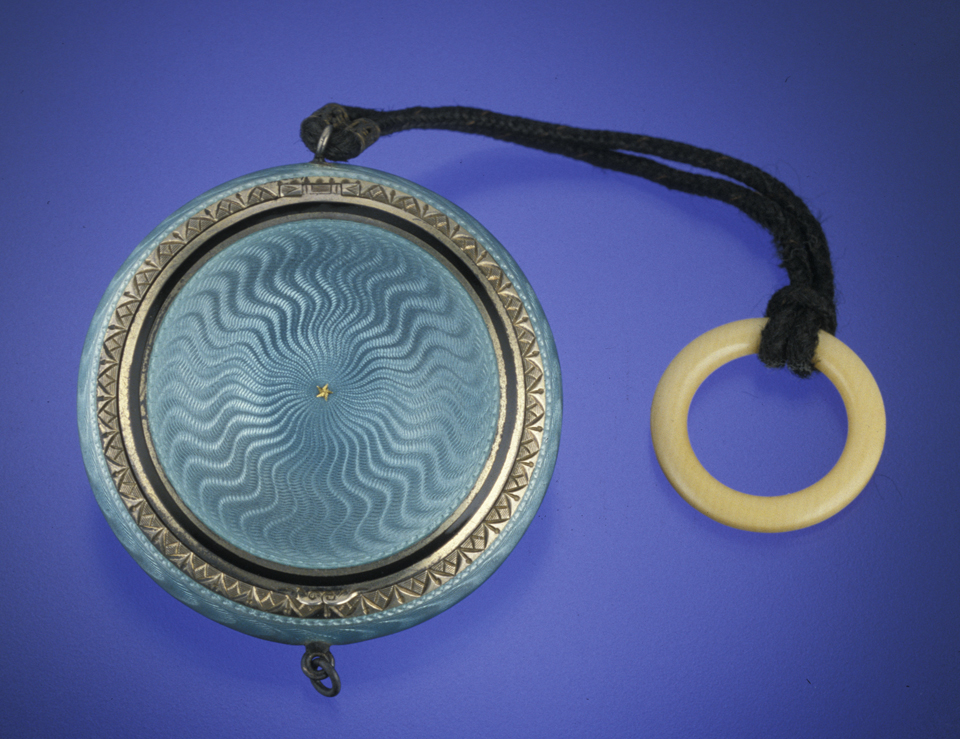 Rene Lalique (1860 – 1945) and Peter Carl Fabergé (1846 – 1920) were two artists who took enameling to new heights. Contemporary designers continue to push the boundaries of the art form.

Want to see the work of contemporary enamel lists?  Learn about The Enchanting Red Egg.