Colored diamonds have a special allure, and rare natural color green diamonds may be the most intriguing of them all.

The green color in a diamond is the result of exposure to radiation. The source of the radiation can be naturally occurring or performed in a laboratory. Natural radiation is the result of the diamond being exposed to radioactive uranium from rocks near the earth’s surface. Artificial irradiation is achieved in a lab using either a linear accelerator (called a linac), gamma rays or a nuclear reactor.

Natural-color and treated-color green diamonds can have the same color appearance, but their value in the marketplace is vastly different. Natural color diamonds of any green hue are very rare, and therefore very valuable. For that reason, green diamonds are often submitted to GIA for an “origin of color” identification report – a determination of whether the color is due to natural or artificial causes. Because the type of radiation found in the earth is similar to the type of radiation used to treat diamonds in a laboratory, it is not always possible for a gemological lab to differentiate between natural or treated color. 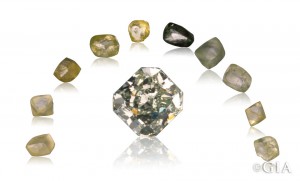 Determining the cause of the color in a green diamond is challenging. GIA researchers have been researching identification techniques, and although there is no definitive test, there is evidence gemologists use to determine if a green diamond is natural or treated.

Natural green diamond crystals often have green or brown surface spots, called radiation stains, which cannot be duplicated in a laboratory. Since these natural radiation stains are on the surface, they are often removed as part of the faceting process, so a light green or green crystal loses most or all of its color after being cut into a finished gem. Sometimes, stains are left along the girdle area in order to retain the green color.

Both natural and treated greens can be uniform in color or patchy in color, although clearly visible green zones at the cutlet (the flat face on the bottom of a stone) are strong evidence for treatment. An older form of radiation, cyclotron irradiation, sometimes created an “umbrella effect” —  a pattern of color zoning that caused a differently-colored umbrella-shaped area at the bottom of the diamond. 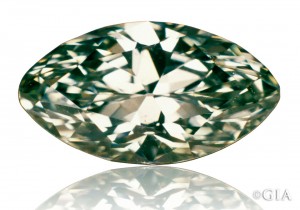 The color of this marquise-shaped natural green diamond is typical of diamonds in the green color family. Green diamonds, when fashioned as gems, very rarely have a pronounced green body color.

The most famous natural-color green diamond is considered by many to be the Dresden Green – the largest-known natural green diamond weighing approximately 41 carats.

The Dresden Green has a storied history. It probably originated in the diamond mines of the Golconda district in India and was brought to London around 1726. It was purchased that same year by Friedrich Augustus I, Elector of Saxony and King of Poland and was subsequently sold to Friedrich Augustus II in 1741. A year later, it was set in a specially commissioned badge of the Order of the Golden Fleece (the Order was founded in 1429 to “encourage and reward virtue and faith among men of high lineage”).

The Dresden Green diamond set in a hat ornament made by Prague jeweler Diessbach in 1768.

The original badge was broken up four years later and the diamond was set into a new badge. In 1768, this badge was dismantled and the section containing the Dresden Green was used to create a hat ornament. This jewel still exists today and it has been housed in the Green Vault (a museum in Dresden, Germany) for more than 200 years, except during times of war when it was transported to a fortress for safekeeping. In 1988, GIA gemologists had the opportunity to examine this famous green diamond.

In addition to its long history, which predates experiments with artificial irradiation, the Dresden Green is famous because its green color was created by natural radiation and the color is throughout the stone – not just at the surface as is typical of natural green diamonds. Theories have been suggested about natural sources of radiation and geological conditions that would produce this green body color, but such diamonds are quite rare and the source is still undetermined.

Analysis of the Dresden Green gave GIA research scientists the opportunity to test the criteria developed to determine if a green diamond’s color is natural or treated. The Dresden Green was an ideal specimen, for it was discovered long before 1904, the date when irradiation experiments on diamonds began. However, at the conclusion of their testing, it was determined that additional research is still needed to find a definitive test for cause of color in green diamonds.

Researchers are now focusing on documenting the gemological properties of known natural-color and known treated-color green diamonds in order to improve the means of recognizing both. Progress on this long-standing gem identification challenge is slowly being made.

Intrigued by green diamonds? Learn more about the origin of color in these rare gems, and other colored diamonds.