The story of the Cheapside Hoard has the twists and turns of the finest detective novels.

Between 1640 and 1666, nearly 500 items – including jewelry and loose gems – were placed in a wooden box and hidden in the cellar of a building near London’s St. Paul’s Cathedral. A large Colombian emerald pocket watch; a rose-cut sapphire and diamond cross pendant; an enameled gold ring set with a large table-cut diamond; a 2,000-year-old Egyptian agate cameo – these were just a few of the spectacular pieces secreted away.

Three views of an enameled gold ring set with a table-cut diamond, an evolutionary cut developed in the mid-1400s. The diamond is estimated to weigh between 3 and 4 ct, and it likely originated from the Golconda mines. Courtesy Museum of London. Photo by Robert Weldon.

With the buried treasure came mysteries that would have confounded Sherlock Holmes.

Who owned the jewels?

The location of the hoard is telling. In the late 1500s, Cheapside Street in London’s West End was in the heart of a bustling jewelry manufacturing district. A jeweler (or syndicate of jewelers), a wealthy collector, or maybe even thieves could have buried the precious collection.

Why were they hidden?

Civil war, political and religious turmoil, plague and the Great Fire of London marked this troubled time. The owner may have been trying to protect the cache from the surrounding tumult.

Why was the treasure never claimed?

Many goldsmiths in London were immigrant craftsmen at the time. The owner may have traveled abroad and died before he could retrieve the fortune. Another possibility is he succumbed to the plague, or perhaps he died fighting in the English civil wars.

The Cheapside Hoard may have been lost forever if not for George Fabian Lawrence (1861-1939), a shrewd antiquities trader and pawnbroker. When a workman’s pickaxe struck through the floor of an old tenement house that was slated for demolition, the laborer found the buried treasure.

The savvy Lawrence rewarded demolition workers with beer and money for turning over what they found. During the weeks after the discovery in 1912, jewelry from the hoard showed up at Lawrence’s office and an astonishing collection began to accumulate. This treasure of mostly Elizabethan and Jacobean jewelry eventually constituted almost 500 pieces. 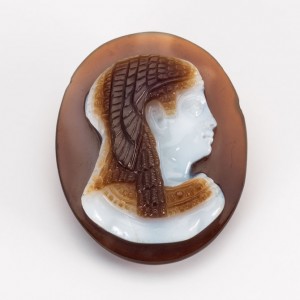 Agate cameo is likely a representation of Cleopatra. Courtesy Museum of London. Photo by Robert Weldon.

And so it was that the Cheapside Hoard, instead of lining the pockets of workers, saw daylight after three centuries of darkness.

The Oldest Piece in the Hoard
This agate cameo is likely a representation of Cleopatra (69–30 BC), the last pharaoh of ancient Egypt. Curators believe it is the oldest item in the Cheapside Hoard. How this 2,000 year-old piece made so far away ended up in 17th-century Britain raises some interesting questions. Courtesy of the Museum of London; photo by Robert Weldon/GIA. 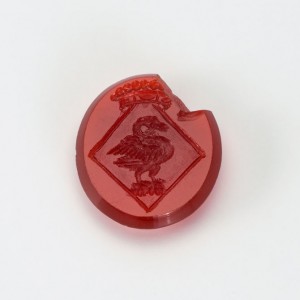 Carnelian intaglio is engraved with the heraldic badge of Viscount Stafford. Courtesy Museum of London. Photo by Robert Weldon.

The Newest Piece in the Hoard
Hazel Forsyth, the Museum of London’s senior curator of medieval and post-medieval collections, sums it all up: “Part of the reason why the Cheapside Hoard is so important is that jewelry tends to be broken up, refashioned, reworked, and therefore doesn’t survive. The Cheapside Hoard covers a huge spectrum of jewelry designs and types, but also gem material from many parts of the world, which really underlines London’s role in the international gem and jewelry trade in this period.” 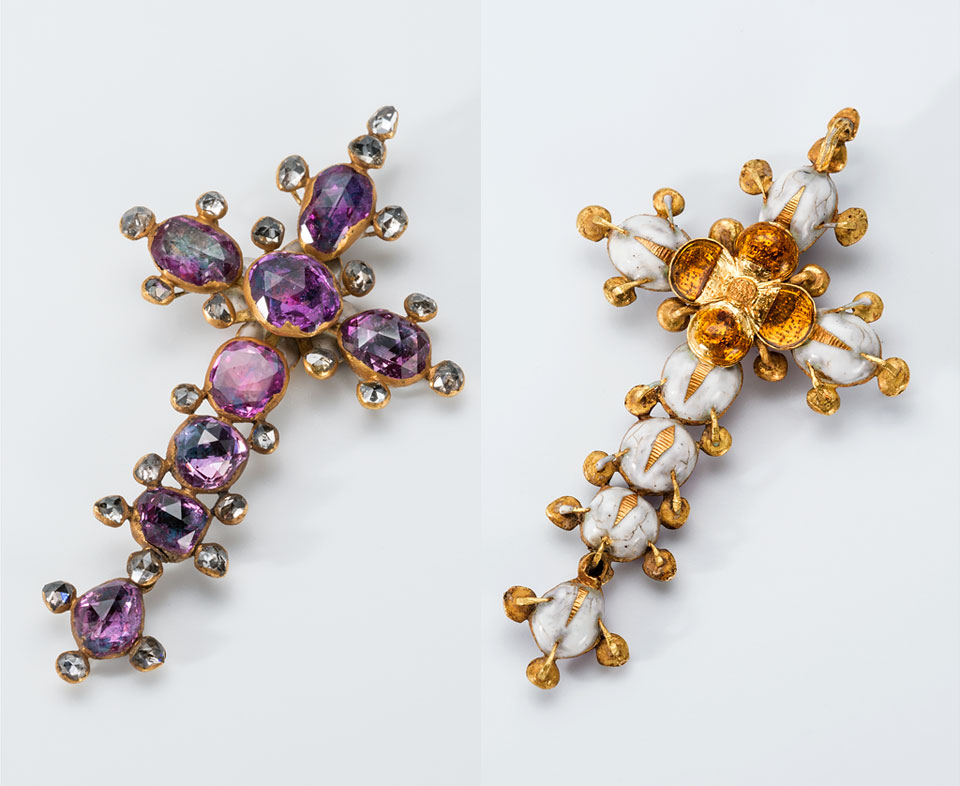 This rose-cut sapphire and diamond cross pendant would have been worn with long enameled chains popular during the Elizabethan era. The back of the pendant (right) showcases highly skilled enameling and delicate metalsmithing. Courtesy Museum of London. Photo by Robert Weldon.

Most of the Cheapside Hoard now resides permanently at the Museum of London and is currently on display through April 27, 2014. Because of its centuries of concealment and the context in which it was found, the Cheapside Hoard is a uniquely important collection of jewels. From this treasure, we can glean valuable insight into the global trade and use of gems in the 1600s. GIA has the full scoop on this mysterious and stunning collection of jewels in the fall issue of Gems & Gemology.