The tradition of wearing mourning jewelry goes back to at least the Middle Ages, when motifs like skulls and crossbones served as a tangible reminder of death. The exhortation memento mori, which literally translates to remember death, urged the wearer to live a moral life. 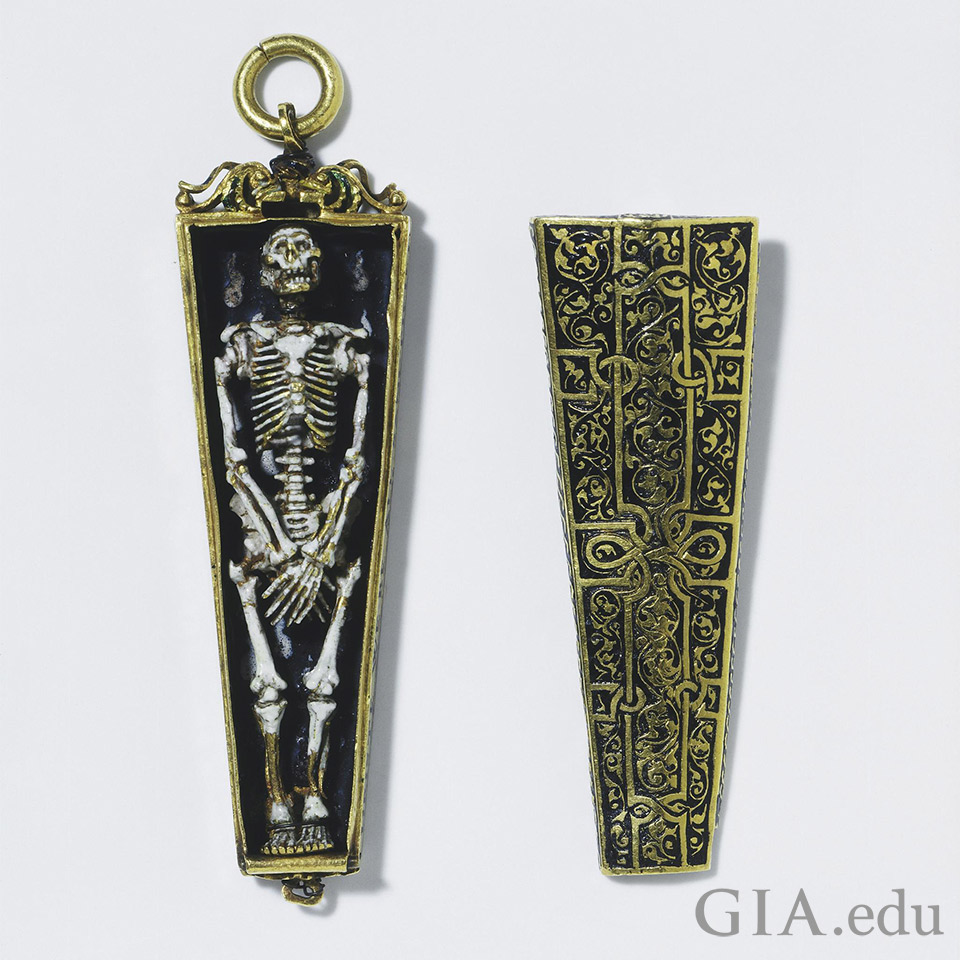 A memento mori pendant (circa 1540) found in England paints a vivid picture of mortality. The inscription, however, has a more solacing message: Christ’s resurrection redeems sins. Courtesy: Victoria and Albert Museum, London

The popularity of mourning jewelry reached its peak during the Victorian era (1837-1901). Queen Victoria was deeply in love with her husband, Prince Albert, and when he died in 1861, she fell into a long depression. Queen Victoria spent much of the next four decades wearing black crepe dresses and mourning jewelry. She commissioned portraits, memorials, and busts of Prince Albert and other mementos that were reminders of her deceased spouse.

The symbols a society uses reveal much about it, and such was the case with Victorian era mourning jewelry. Gone were the skulls and crossbones of memento mori jewelry of the Middle Ages. Instead winged cherubs, clouds, mourners sobbing at tombs, urns, and weeping willows took their place. These new images reflected a change in philosophy: God was no longer envisioned as the exacting judge of the Middle Ages, but as a father watching his children at play in his world. This softer and more sentimental imagery was more appropriate to express these beliefs. 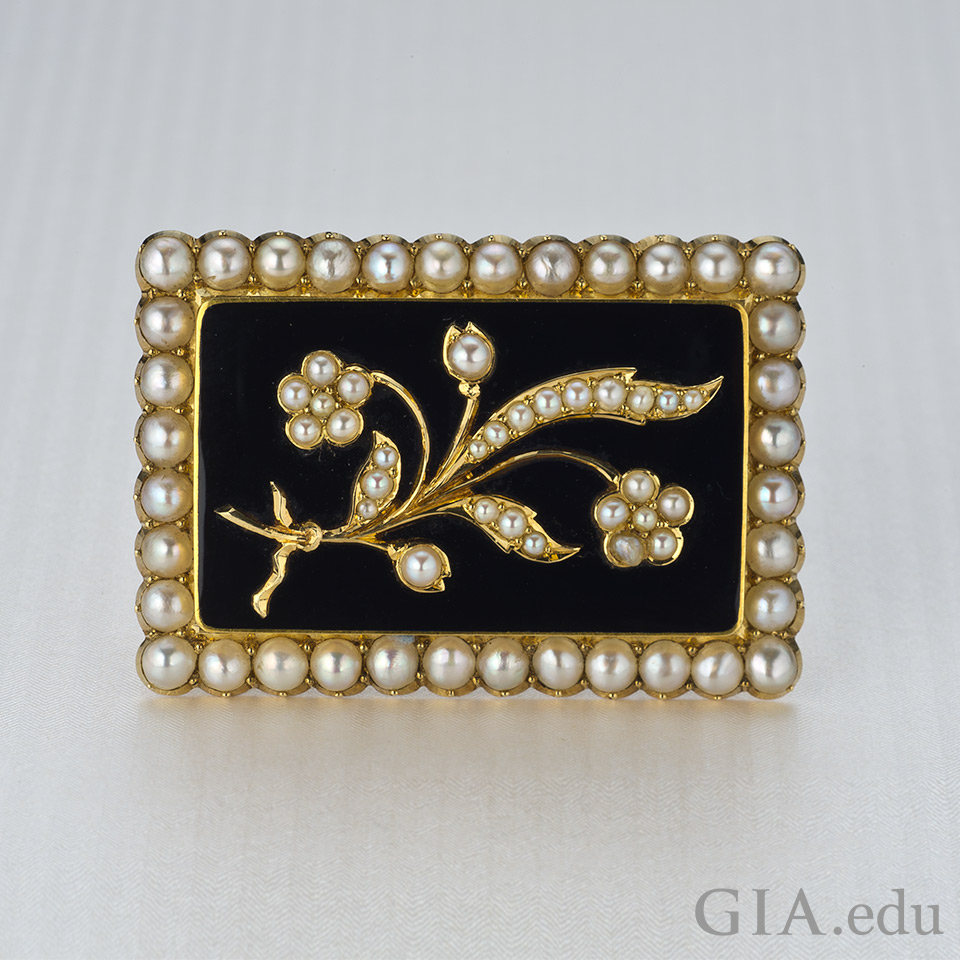 Hair Jewelry – jewelry that contained locks of a loved one’s hair – was particularly popular during the Victorian era. The Victorians believed that hair had a sacred quality because it contained something of the essence of the person. And because it was somewhat imperishable, it also symbolized immortality. 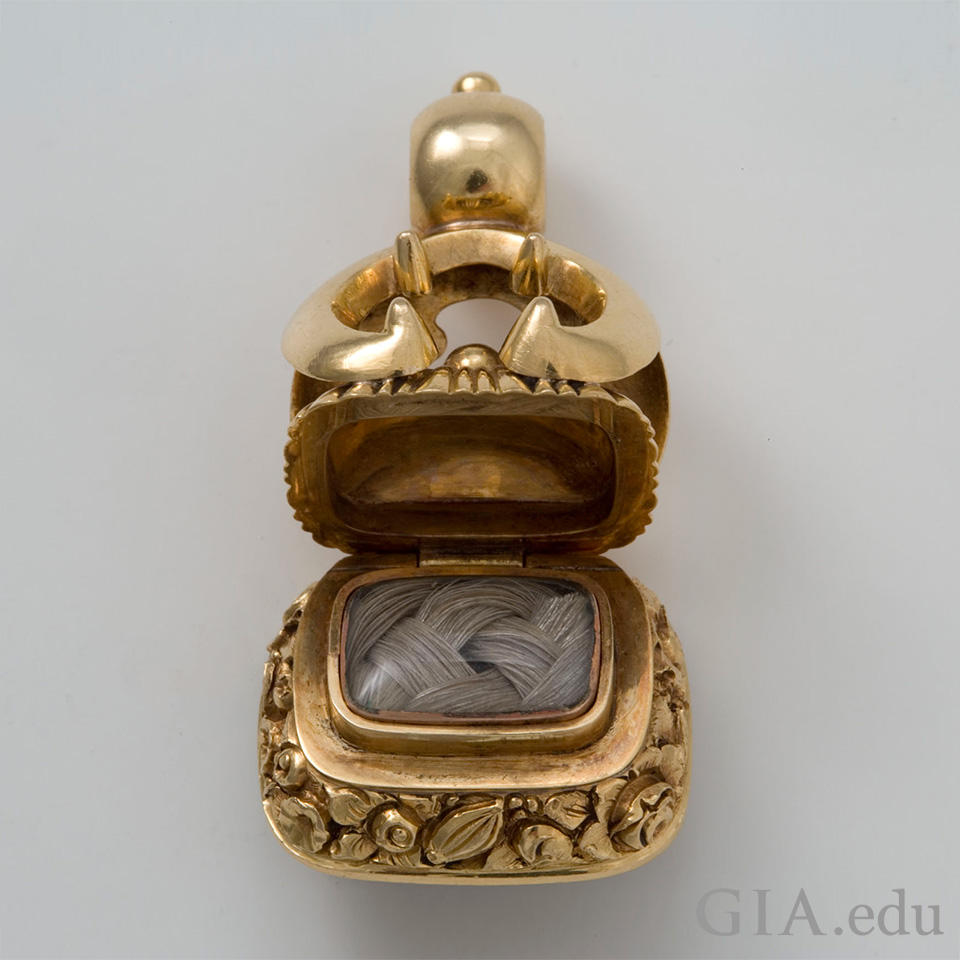 This Victorian watch fob opens to reveal plaited locks of human hair. The stone on its base is very dark, almost black. These features are typical of mourning jewelry. Photo: Valerie Power/GIA. Courtesy: Jana Miyahira-Smith

Hair was used to make everything from exquisitely detailed miniature scenes in jewelry, to braided chains to hold watches and pendants, and even large framed pieces of memorial art. By the mid-1800s, England was importing 50 tons of hair a year to supplement that of the deceased due to the popularity of memorial jewelry and art. 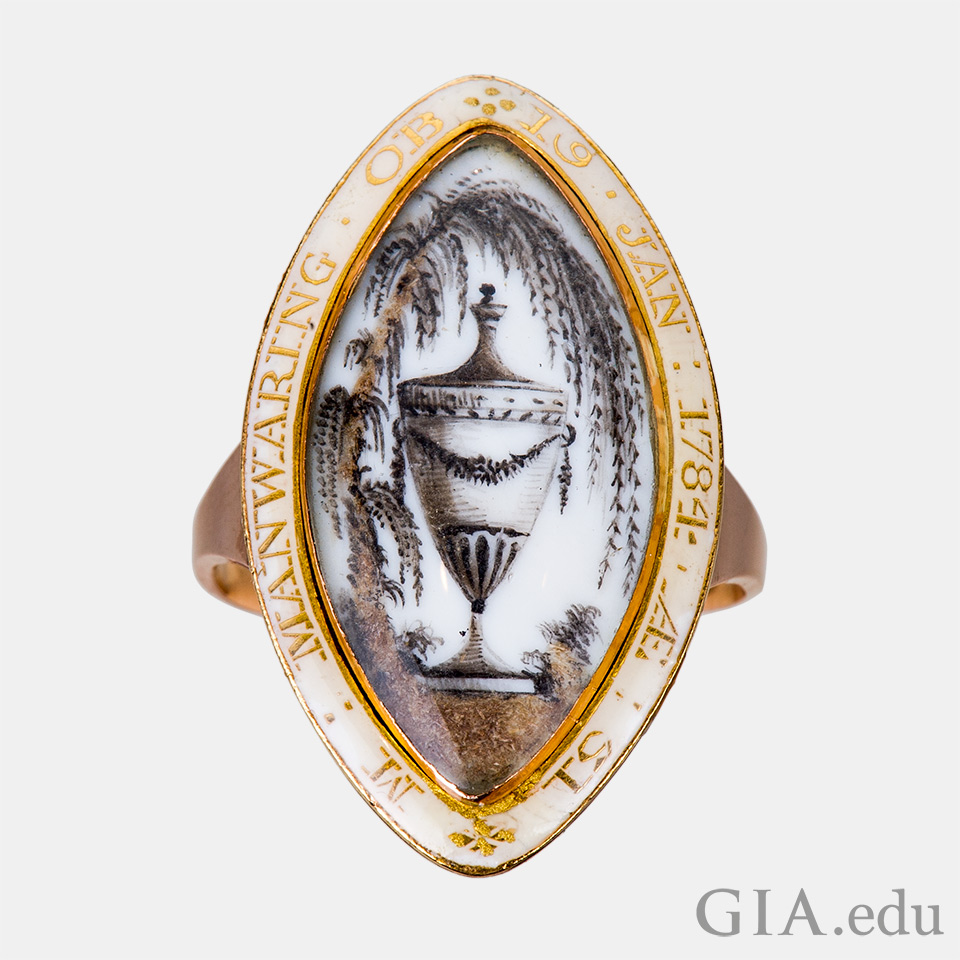 Although not Victorian, this late 18th Century, 18K gold memorial ring from the Georgian period incorporates small pieces of hair under the base of the urn and in the willow tree. The white enamel suggests the deceased was unmarried; the individual died on 19 January 1784 at the age of 51. Photo: Kevin Schumacher/GIA. Courtesy: Lowther Antiques, London, England

Death in the Victorian Era

Mourning jewelry may seem dreary to our modern sensibilities, but understanding the times when it was worn lends a different perspective. The average lifespan during the Victorian era was 40 to 45 years. Europe was in a near constant state of war, and cholera, typhoid, smallpox, and scarlet fever were common killers. Approximately one in three children died before the age of five, and epidemics sometimes brought that number to one in two.

Simply put, death was a constant companion in the Victorian era. Mourning jewelry brought a little solace to the survivors who had to cope with frequent losses.

You probably won’t find Victorian era mourning jewelry lining a display case of your local jeweler – though these antique jewelry pieces are prized by collectors and are exhibited in museums. But you’ll probably see skull jewelry in today’s chic boutiques. The imagery used in memento mori jewelry has been resurrected as a hip symbol of rebellion and fearlessness – and probably a subconscious meditation on the inevitable. So mourning jewelry iconography is still with us, but in another incarnation. 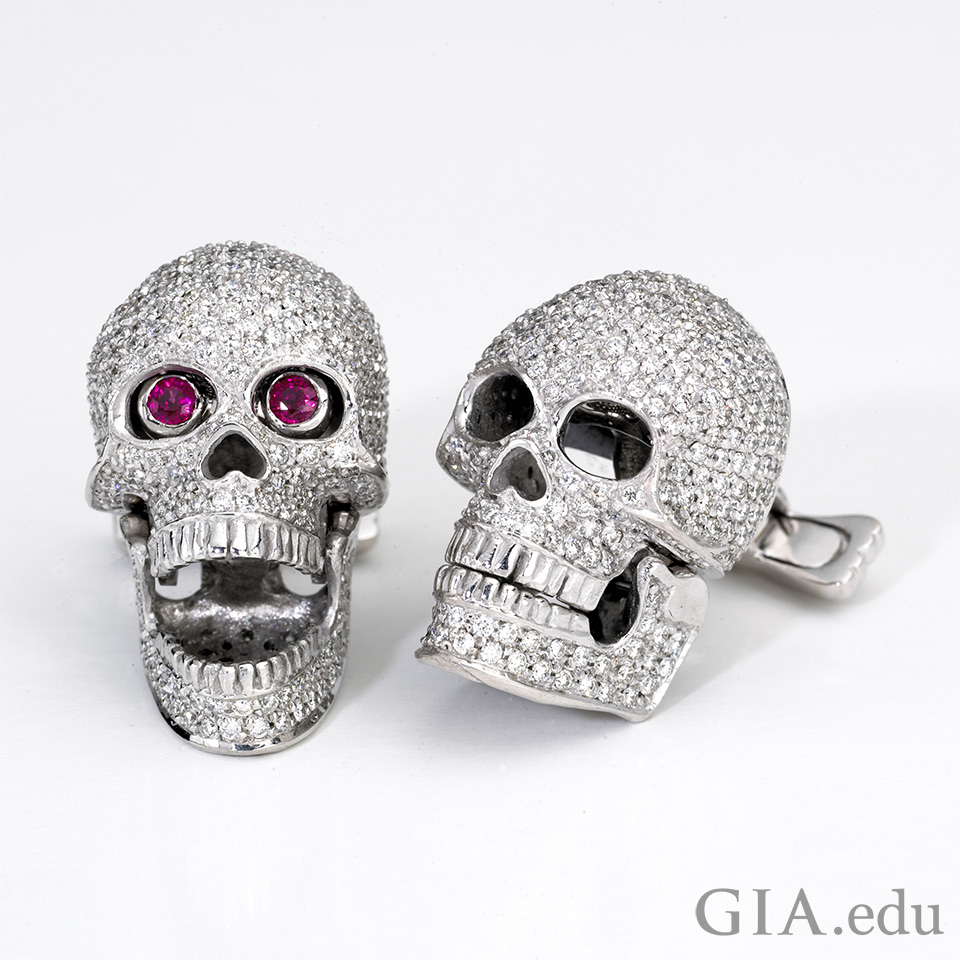 These contemporary cufflinks by Deakin & Francis might be a meditation on the grave. But the pavé set diamonds and pink sapphire eyes make them indisputable fashion statements. Courtesy: Deakin & Francis

In the end, perhaps mourning jewelry can be thought of more as an expression of love than of grief. Its purpose was to keep a departed beloved one near to the heart. And that is a sentiment that transcends culture and time.

European aristocrats exchanged the Lover’s Eye to send secret messages. Discover what they were telling each other.