Diamonds are prized around the world for their rarity. A gem-quality diamond is already one of the most rare items found in nature. Of all colored diamonds, one color in particular is especially rare: a predominantly red diamond.

“Predominantly red” means that red is the primary color with no secondary hues (like purple).  In fact, red diamonds are so rare, that GIA records show that over a 30 year period from 1957 to 1987 there was no mention of a GIA lab report issued for a diamond with “red” as the only descriptive term.

That’s a rather remarkable statement considering the number of diamonds GIA’s nine global laboratories grade each year, and that GIA has graded many of the world’s most famous colored diamonds.

Adding to the mystique of red diamonds is the question of how they get their color. GIA researchers, who have been studying diamonds for decades and have access to the most sophisticated equipment, are still not sure what causes their color. One explanation is that “defects in the atomic structure that result from gliding (the slight movement of atoms along the octahedral direction) are partially responsible.” 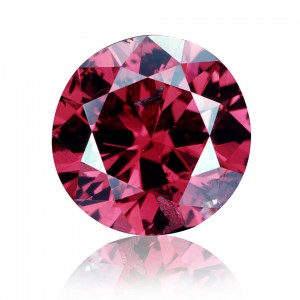 The Hancock Red is one of the most famous red diamonds. At the time of its sale in 1987 it was the most expensive per-carat gemstone ever sold at auction. The hammer came down at $880,000—a remarkable $926,315 per carat, eight times its pre-sale estimate.

“The publicity generated by the selling price of the Hancock Red and other significant fancy colored diamonds at auction spurred interest in these rare stones around the world, particularly with celebrities. In addition, diamond cutters better understand how to fashion them to derive more intense colors in the finished polished stone,” said Russell Shor, GIA senior industry analyst.

The Moussaieff Red, another famous red diamond, is a modified triangular brilliant weighing in at 5.11 carats.It was included in the 2003 exhibit, “The Splendor of Diamonds” at the Smithsonian National Museum of Natural History. Four other diamonds in the exhibition dwarfed the Moussaieff Red, yet gemologists still regard it as a breathtaking specimen worthy of inclusion.

A Summer 2003 article in Gems & Gemology had this to say about the Moussaieff Red: “…for a diamond of this color it is astounding—” (“Fancy” is a term GIA uses for grading colored diamonds, with Fancy Intense, Fancy Deep, and Fancy Vivid having the strongest color and considered to have the greatest value). 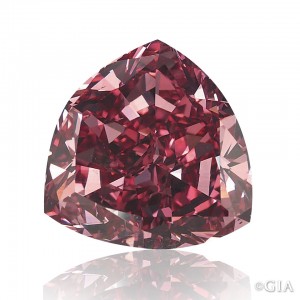 The 5.11 ct Fancy Moussaieff Red. Most other reddish diamonds are “cooler” in appearance and termed purplish red. Courtesy of William Goldberg Diamond Corp.

GIA issued Colored Diamond Grading Reports for the Hancock Red and the seven diamonds exhibited at the Smithsonian. 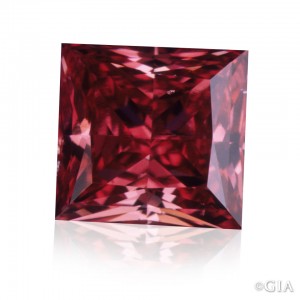 Red diamonds can be modified by purple, orange or brown. This 0.76 ct diamond from the Argyle Mine in Australia is a purplish red.

Dream of owning a red diamond, but can’t afford one? Both natural and synthetic diamonds can be treated to produce a red color, usually with irradiation followed by annealing or a coating.   These diamonds are still very expensive, although they may present a more accessible option for those who love the deep red hue.