Just a few decades ago, saying a diamond was brown was considered to be the kiss of death. These ugly ducklings of the colored diamond world were often destined for industrial use.

But the ugly duckling became a swan in the 1980s, when advertisers started marketing brown diamonds from Australia’s Argyle mine. Evocative color names like champagne, cognac, and chocolate, used in place of brown, were colorful descriptions that conjured appealing images. When chic design houses started incorporating them into their designs, it was a sure sign that they had arrived.

Brown diamonds are popular due in large part to positive marketing campaigns and attractive jewelry designs which can make a big statement. Naturally colored diamonds are rare. Comparatively speaking, brown diamonds are more affordable than pink, yellow, and blue diamonds, making them more accessible to many consumers. 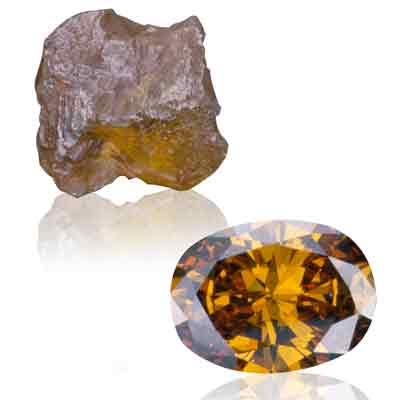 The difference in the appearance of the rough brown diamond, 1.20 ct, to the cut stone, 0.69 ct, is striking and shows what an experienced diamond cutter can achieve. Photo © GIA & Tino Hammid.

The color in natural brown diamonds is caused by internal parallel brown grain lines due to distortion of the crystal lattice (arrangement of molecules).

Brown diamonds are graded by GIA against brown masterstones, and GIA Diamond Grading Reports include a comment describing the color for grades K to Z.

Brown diamonds outside of the D-to-Z scale have the potential to receive Fancy Light Brown, Fancy Brown or Fancy Dark Brown grades, depending on their tone.

History, along with fashion, repeats itself. About 50 years ago, yellow diamonds were considered undesirable. Today diamond connoisseurs spend small fortunes on the finest yellow diamonds. So, who can tell? The same might be true for brown diamonds someday.

Champagne? Cognac? Chocolate? Which one is your favorite?