Blue diamonds are extremely rare, exquisitely beautiful, and rich in lore. This special combination has made them coveted by diamond lovers and jewelry connoisseurs.

How rare are blue diamonds? To find that glittering needle in the haystack, tons of ore have to be unearthed. And when a blue diamond is found, you can imagine the excitement it causes. 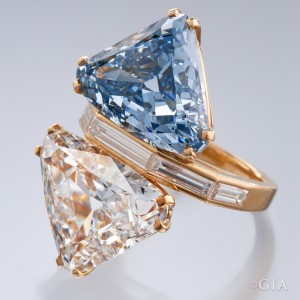 The stories behind some of the most famous blue diamonds are even more colorful and have greatly added to their mystique. Blue diamonds were first found in India and were brought to the West by gem dealer Jean-Baptiste Tavernier in the 17th century. He sold a large blue diamond to King Louis XIV of France. Originally called the Tavernier Blue, this diamond was recut into the French Blue and became part of the French crown jewels. It was stolen when the crown jewels were looted in 1792 and subsequently recut to avoid detection. GIA research confirms earlier studies that indicate the Hope diamond could have been recut from the French blue. The diamond was eventually purchased by Henry Philip Hope in 1830, and has borne his name ever since. The Hope diamond has earned a reputation of being cursed. It is often associated with the deaths and difficult lives of some of its recent owners. 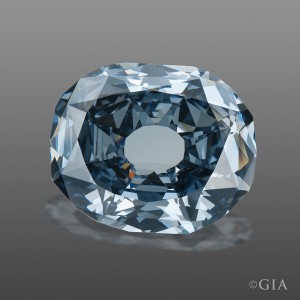 The historic Wittelsbach diamond, graded by GIA as Fancy Deep grayish blue, sold for a record-breaking $24.3 million at Christie’s London in December 2008. After the sale, it was recut from 35.56 ct to 31.06 ct, as shown here, purchased by Graff and renamed the Wittelsbach-Graff.

The 70.21 ct Idol’s Eye is a blue diamond shrouded in myth. It was probably found in India’s Golconda district sometime in the early 17th century. Legend says it was plucked from the eye of a statue, but this is just lore and not truth. The Idol’s Eye was sold to a mysterious buyer at Christie’s London on July 14, 1865, the first documented fact in its history. In 1906, it was known to be in the possession of Abdul Hamid II (1842–1918), the 34th Ottoman Sultan.

India was historically the source for blue diamonds. Within the last several years, notable blue diamonds have been found at the Cullinan Mine in South Africa. A few other South African mines have produced blue diamonds and some are occasionally found in Sierra Leone, Borneo which is off the coast of Indonesia, and Brazil.

These four Fancy blue diamonds are similar in saturation. But they differ in tone – note the range of light to dark from left to right. ©GIA and Harold & Erica Van Pelt.

Blue diamonds are unarguably beautiful but they present unique cutting challenges. The rough is usually asymmetrical which can make it more difficult to determine how the stone should be cut and polished. Rough blue diamonds can also have color zoning – areas that have more blue than others. Cutters want to get the best color out of a diamond, while retaining as much weight as possible, and color zoning can make this balancing act extremely difficult. 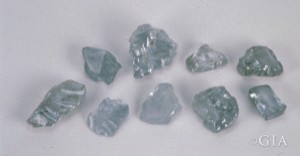 Rough blue diamonds often have an irregular shape, which makes them challenging to cut.

With understanding of a subject often comes a deeper appreciation. Now that you know some of the secrets of blue diamonds, you may find them even more beautiful. GIA’s online Gem Encyclopedia has an entire entry devoted to colored diamonds. Learn more about blue diamonds and all the rainbow hues.