Surprisingly, the 127.01 carat diamond called the Portuguese seems to have no connection to its namesake country. Legend claimed this diamond was found in the mid-1700s in Brazil and belonged to Portuguese royalty. However, there is no evidence to support this story. Instead, records indicate the diamond was found at the Premier Mine in Kimberley, South Africa, in 1910. 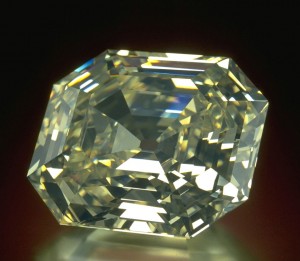 The Portuguese is a classic example of what is sometimes referred to as an “overblue.” Some diamonds emit visible light, called fluorescence, when they are exposed to ultraviolet (UV) radiation. A very small percentage of these diamonds with blue fluorescence that is extraordinarily strong, like the Portuguese, may exhibit a noticeable oily or hazy appearance because of the UV component in sunlight.

When American jeweler Black, Starr & Frost purchased the diamond, it was a cushion cut that weighed almost 150 carats. The diamond was recut into an octagonal step cut, called an Asscher, and set in a platinum choker studded with diamonds. In 1928, Peggy Hopkins Joyce, an actress who got her start in the Ziegfeld Follies, traded a pearl necklace valued at $350,000 plus $23,000 in cash for the diamond choker.

In 1951, Harry Winston purchased the diamond from Joyce and it traveled the country as part of Winston’s “Court of Jewels” exhibition, which might be when it acquired its name. The Smithsonian Institution traded 3,800 carats of small diamonds for the Portuguese in 1963. It is the largest faceted diamond in the National Gem Collection and it is currently on display in the National Museum of Natural History.