Scoff at the evil eye? Belief in this ancient curse is still widely held. While we can’t support the idea scientifically, we do love the gems and jewelry thought to offer protection against the malevolent look believed to cause sickness, poverty and even death.

Fear of the evil eye appeared in many classical Greco-Roman texts. In ancient Egypt, the Eye of Osiris amulet was worn for protection. In early Middle Eastern cultures, depictions of the open right hand, or hamsa, were used. Later, Jews embraced it as the Hand of Miriam, Christians wore it as the Hand of Mary (or Virgin Mary’s Hand) and Muslims named it the Hand of Fatima. These are not just relics of the past – today, variations of these and other talismans against the evil eye can be found around the world. 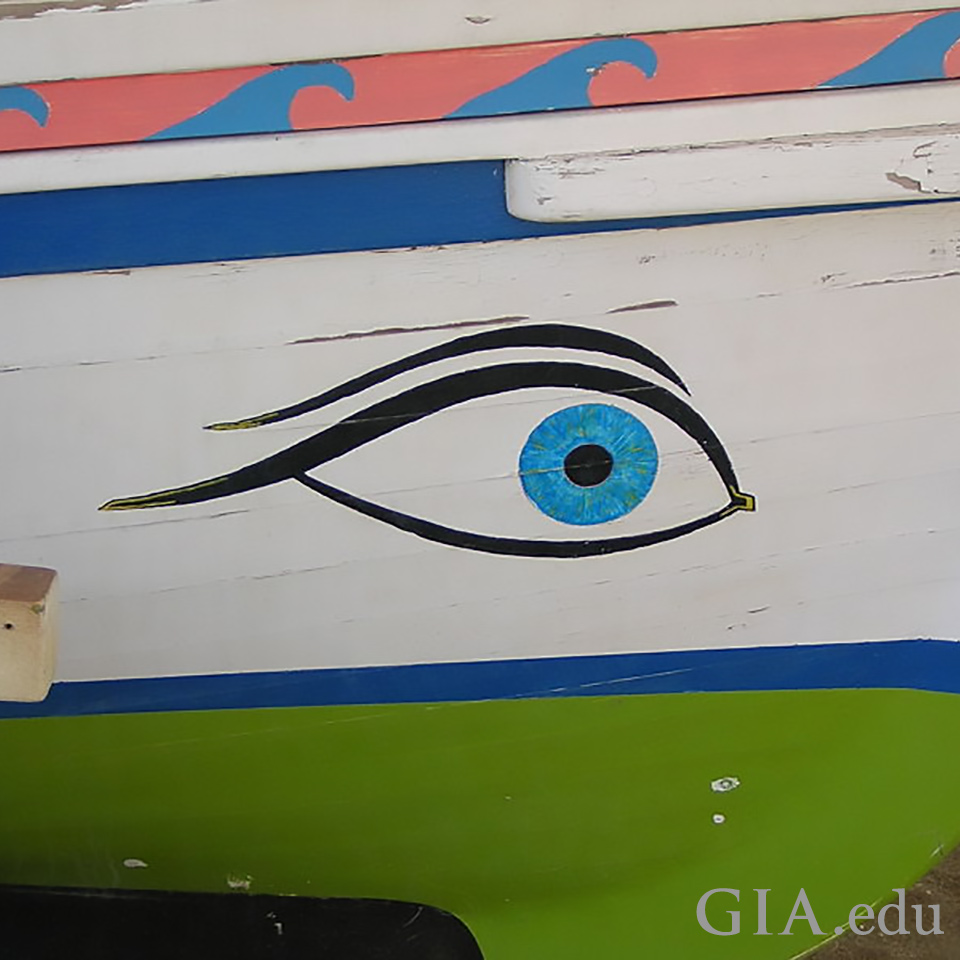 A boat in Malaga, Spain, has a benevolent blue eye painted on it to ward off evil spirits. Courtesy: Jose Bolorino 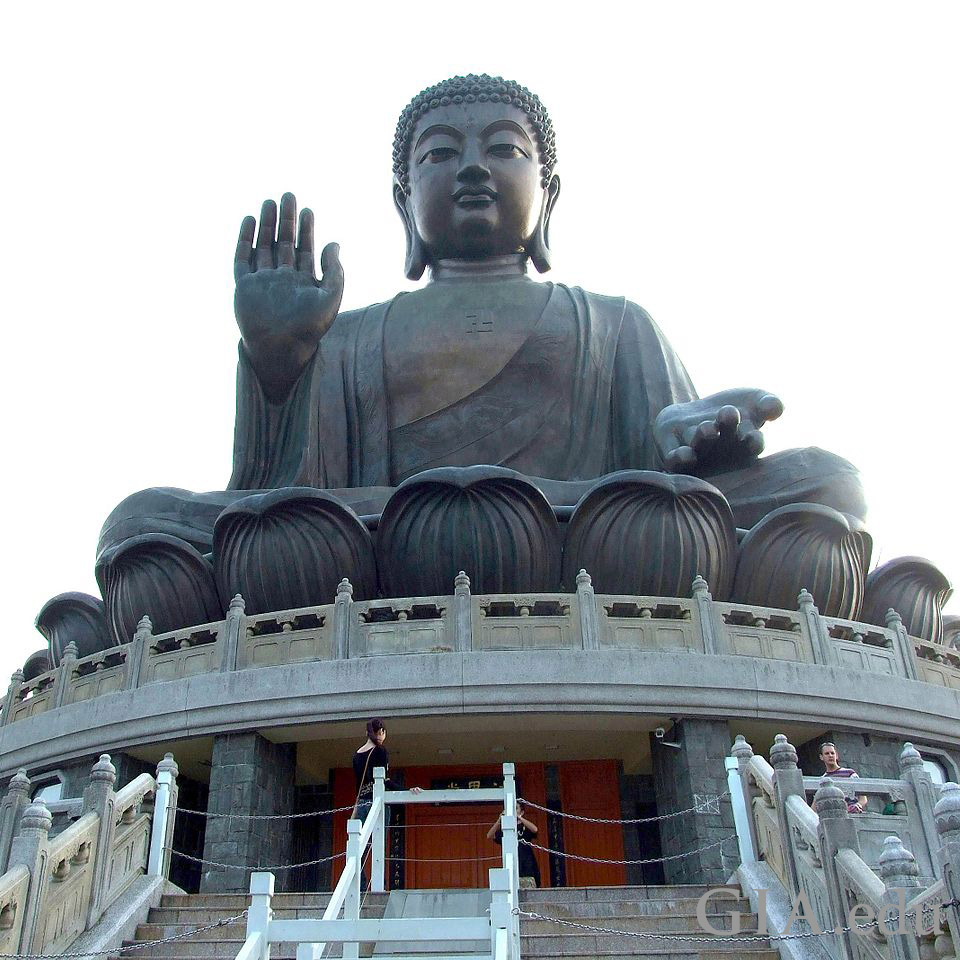 Holding up his right hand in a gesture of protection, this statue of the Buddha in Hong Kong assures the faithful that they are safe. The statue was completed in 1993. Courtesy: Chong Fat

Worn by many in Italy, the cornicello (“little horn”) is thought to protect against the evil eye. It is often fashioned from silver or gold; this example is carved out of red coral. Courtesy: Dario Lo Presti

Belief in the evil eye is still widespread. You’ll find protective charms hanging in taxicabs in Istanbul, as symbols painted on buildings in the Mediterranean and Middle East, as cornicellos (“little horns”) in Italy and as couture jewelry flashing on celebrities like Madonna, Mick Jagger, Rhianna, Brad Pitt, Kim Kardashian and many others. Two iconic examples of the evil eye haunting pop culture are the “eye of Sauron” from The Lord of the Rings and the Indiana Jones Adventure at Disneyland where the god Mara tells visitors: “You have looked into my eyes. Your path now leads to the Gates of Doom!”

The hamsa is perhaps one of the most identifiable symbols of evil eye jewelry. It represents the power to defeat the evil eye, and gives strength and blessings. Derived from the Arabic word khamsah (“five,” or “the five fingers of the hand”), the hamsa also symbolizes protection. 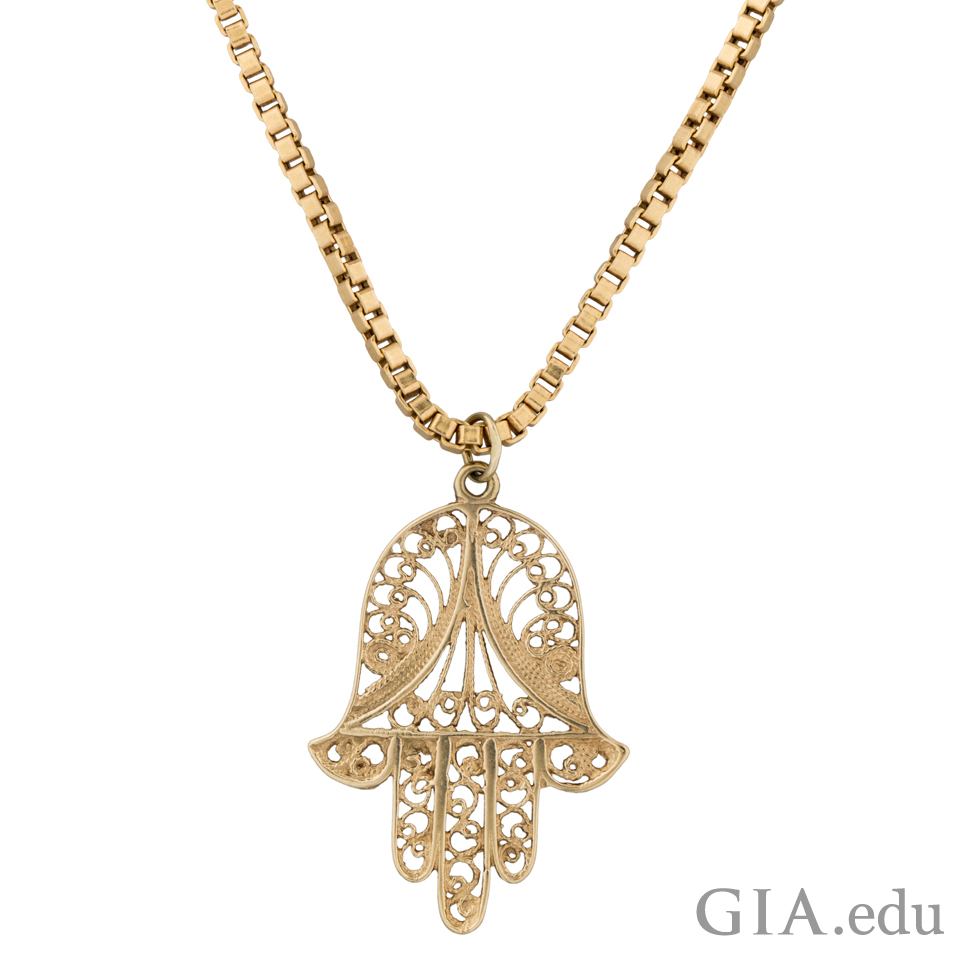 This ornately decorated 14K yellow gold necklace is a contemporary version of hamsa jewelry, worn to protect the wearer from an evil eye. Courtesy: TheRealReal.com 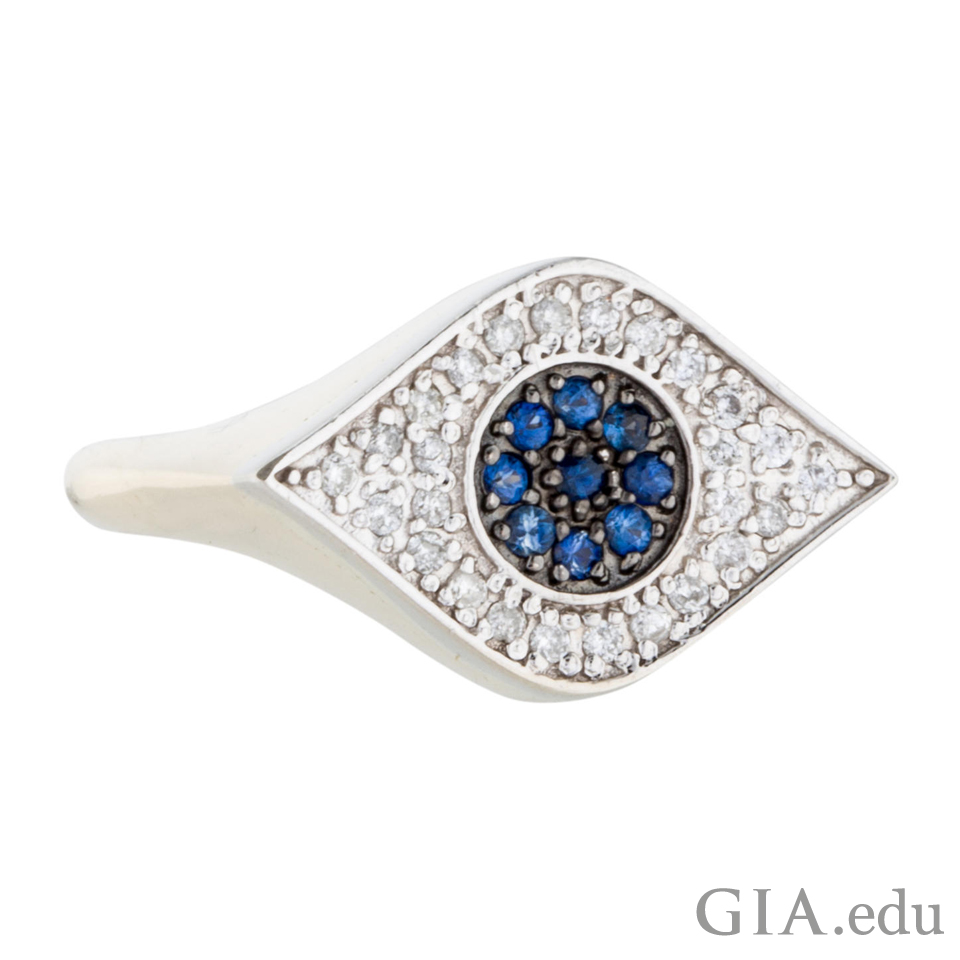 Decorated with diamonds and blue sapphires set in 14K white and yellow gold, this eye-shaped ring should keep away unwelcome stares. Courtesy: TheRealReal.com

Blue was thought to symbolize heaven, so the color was often incorporated into evil eye jewelry for its protective power. It’s an association that can still be found in evil eye jewelry today.

The blue background may be the first thing you see in this 14K gold hamsa pendant. Just as arresting are the 0.41 carats of diamonds that outline the hand and its central eye. Courtesy: ItsHot.com

Symbols and their meanings change over time, and such is the case with evil eye jewelry: For some, it became a melting pot of images. One evil eye amulet created in the 5th century CE had a lion, stag, scorpion, dog, thunderbolt, snake and owl. Each animal was thought to offer additional protection. Jewelry designers now freely play with these symbols to reinterpret the ancient motif.

If one eye is good, a bunch must be better – or so suggests this modern evil eye ring from Turkey. Photo: Orasa Weldon/GIA. Courtesy: Rose Tozer. 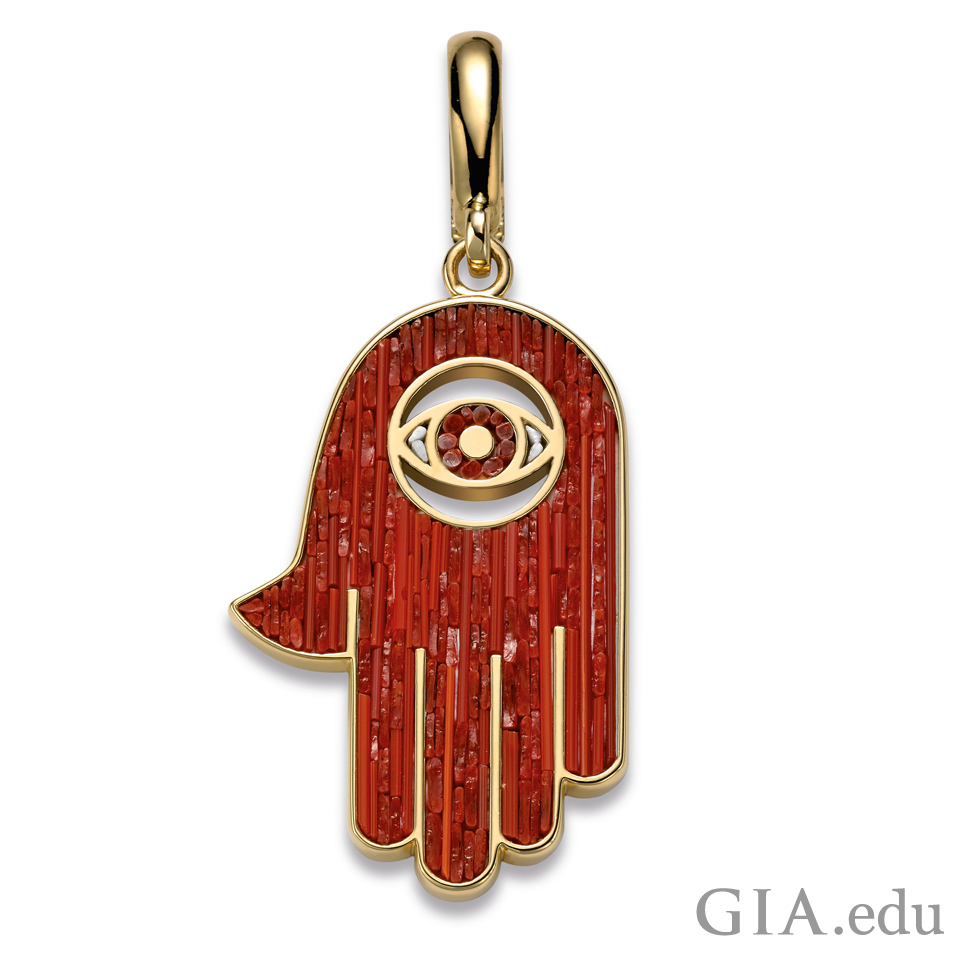 Sicis, an Italian manufacturer of micro-mosaics, uses the color red rather than blue in this provocative hamsa hand, evoking a traditional Italian belief in the protective powers of coral. Courtesy: Sicis

Gems that Ward off the Evil Eye

Gems have long been thought to offer protection against various maladies. Emeralds, for example, were believed to be antidotes to poison. So it’s not surprising that some gems were believed to have the power to ward off the evil eye.

The evil eye shall have no power to harm
Him that shall wear the diamond as a charm. 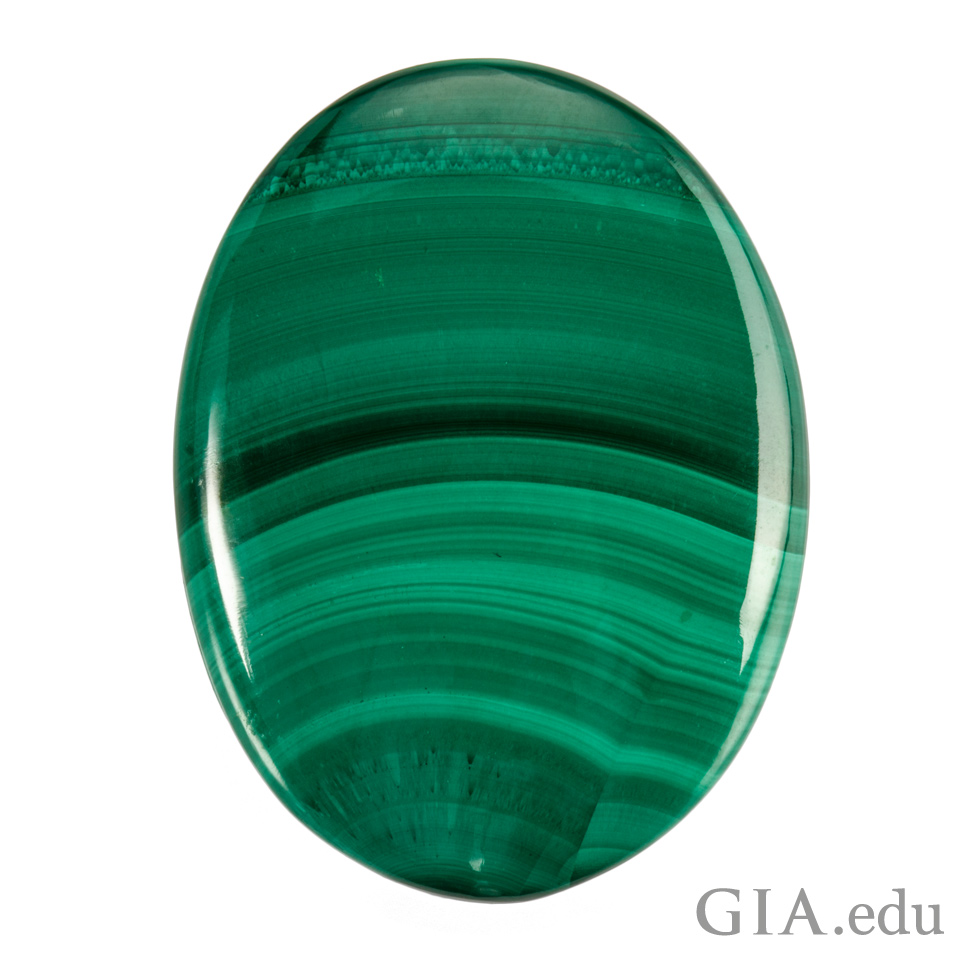 Italians believed malachite, a deep green gemstone, warded off the evil eye, so this 85.86 carat (ct) oval cabochon would have been a coveted charm. Photo: Robert Weldon/GIA. 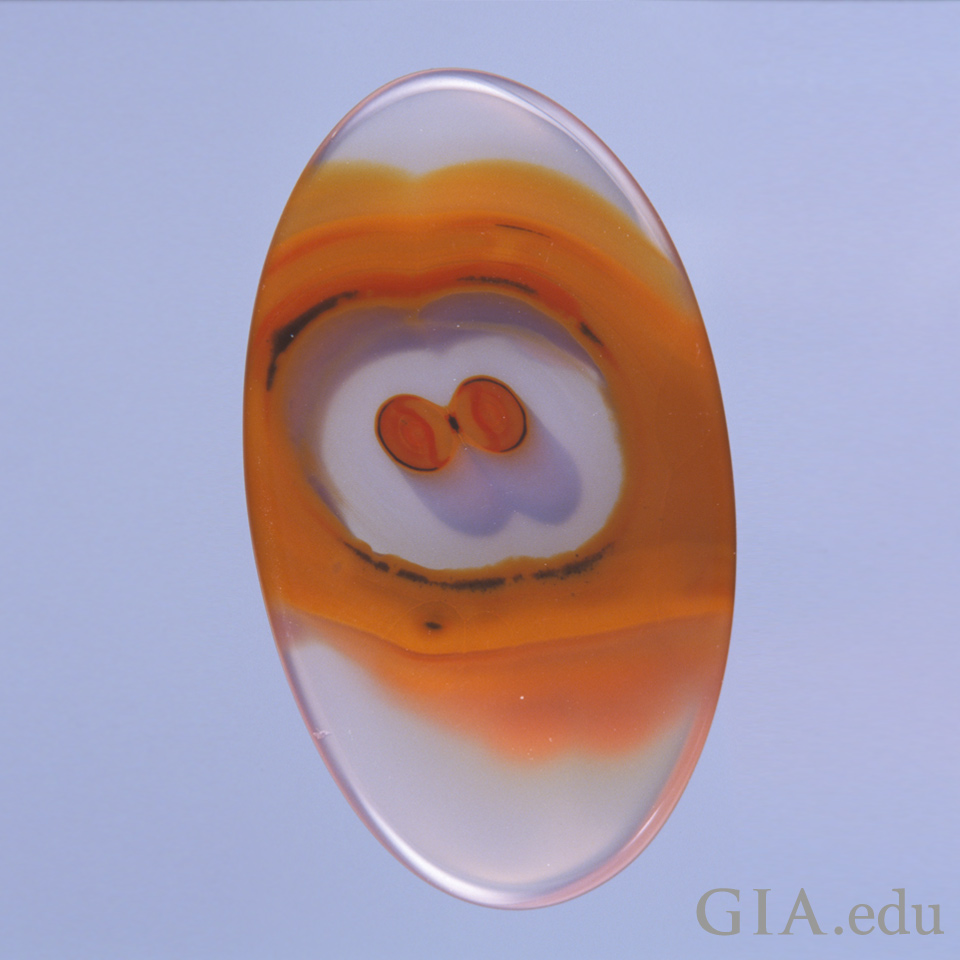 A form of quartz, agate can be translucent and have attractive patterns. This one from Ecuador has two eyes, which may offer double the protection. Photo: Maha Tannous/GIA. 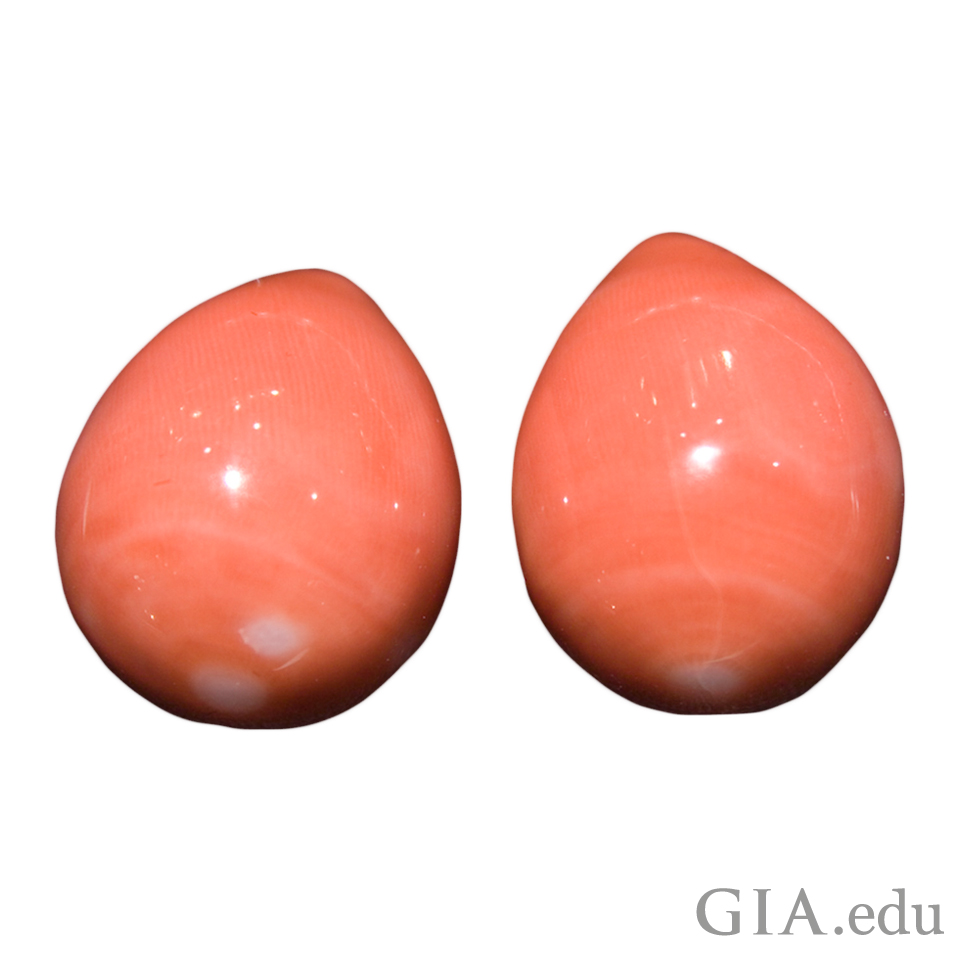 Coral was thought to protect young children against the evil eye, and is still considered a potent remedy in the Mediterranean. Photo: Valerie Power/GIA. Courtesy: Roben Hagobian, R. H. & Company

You don’t need to believe in the protective powers of evil eye jewelry or gemstones to be captivated by their stories. Consider them as beautiful and fascinating additions to your gem and jewelry collection –and feel a little more magical just by wearing them.

What’s the opposite of the evil eye? The Lover’s Eye. We share how royalty exchanged secret signs of affection.