Jewelry always sends a message about the wearer, but sometimes the message is meant to be a secret one. Such is the case of the Lover’s Eye – the name for a miniature portrait of a single eye often painted on ivory.

The practice of giving a Lover’s Eye to one’s sweetheart began with George, Prince of Wales (1762-1830), who would one day become King George IV. In 1784 he met and fell in love with Mrs. Maria Fitzherbert (1756 – 1837), a twice-widowed Catholic. To cool his ardor, Maria relocated to France but the prince wouldn’t give up. In November 1785, he sent her a token of his love: a miniature portrait of his eye. In December they were secretly married, despite a British law that prohibited Anglican royalty from marrying Catholics.  A year into the marriage, the prince gifted Maria with another miniature eye portrait and she returned the favor with an eye portrait of her own.

While the marriage didn’t last (it was declared illegal and George married his first cousin Caroline of Brunswick), a “lover’s eye” fad was born that lasted from 1790 to 1820.

The practice of giving the Lover’s Eye flourished in Europe during a time when ladies and courtesans were seen together at court. Across three decades, countless lovers gave romantic keepsakes to their paramours while keeping their identities secret from inquisitive eyes. Wearing a Lover’s Eye, ironically, was a declaration that one was having an affair, especially as these miniature portraits were often set in highly visible objects: lockets, rings, and toothpick boxes.

This Lover’s Eye is set in an 18K gold brooch. An unusual feature: more than just the eye is painted (circa 1850). Photo by David Behl, © Janet Mavec & GIA.

The Lover’s Eye had a very different meaning under Queen Victoria (1819 – 1901). It was no longer a symbol of illicit romance, but an object of affection. Queen Victoria commissioned these eye miniatures of her children, friends, and relatives’ eyes, and aristocratic society imitated the monarch’s example.

Turquoise was rarely used in the Lover’s Eye objects, especially as it was extremely expensive, and so represented financial success. In business, turquoise is thought to improve communication skills, inspire creativity and bring calmness. Photo by David Behl, © Janet Mavec & GIA.

The gems framing the Lover’s Eye had symbolic import as well. Garnets meant friendship; pearls represented tears, purity, or humility; coral warded off the Evil Eye; and diamonds showed the wealth of the giver.

A ring of pearls around the portrait suggests that this Lover’s Eye was made to memorialize someone who had passed away. Photo by David Behl, © Janet Mavec & GIA.

A Lover’s Eye is, for the most part, a historical footnote – it’s not something you’re likely to see in the local jewelry store.  But at least one contemporary designer has reimagined the motif. Melissa Spencer, who was inspired by miniature painted portraiture and the Lover’s Eye, gives it a modern twist by using portrait-style photographs. 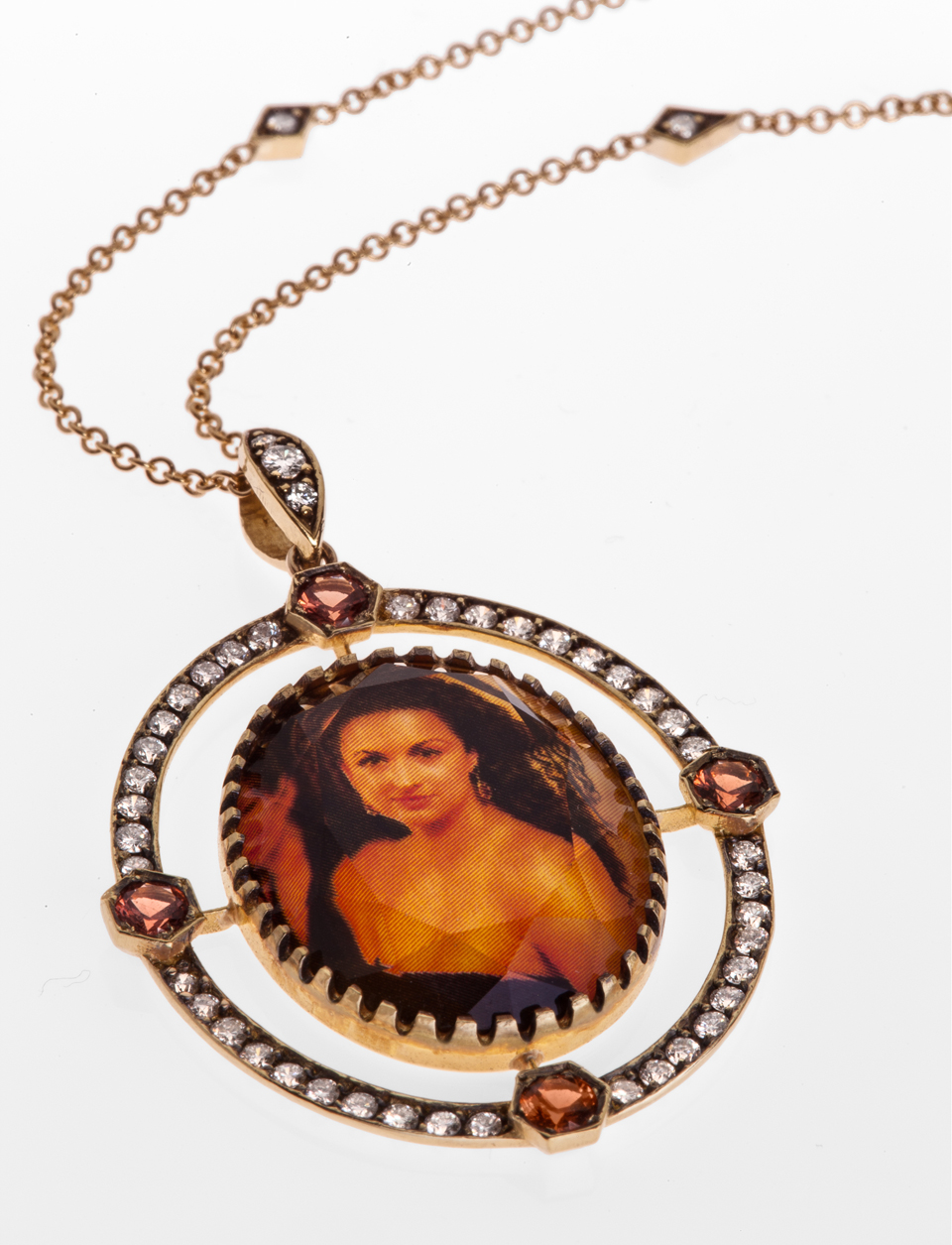 Melissa Spencer stumbled upon the Lover’s Eye while tracing her family’s ancestry. Her interpretation of it blends photography and natural gemstones, like this 18K yellow gold pendant with diamonds, mother of pearl, and spinels. A light black rhodium is applied to create a vintage look. Photo courtesy Melissa Spencer.

Centuries have passed, and the Lover’s Eye continues to be reborn. Perhaps it will now play the part of a lasting memento in a fast-changing world.

Jewelry can also be used to send very public messages. See how the First Ladies of the United States wore pieces that made a statement.