As a diamond consumer, you’ve probably heard the term “diamond treatment” or “treated diamond,” or perhaps “enhanced diamond” and wondered what that meant. A relatively small percentage of gem-quality diamonds are treated and they are treated for two reasons: to improve clarity or to alter color.

Scientists began tinkering with one of Mother Nature’s most beautiful creations at the turn of the 20th century, and in earnest after World War Two. Over the years, advances in technology have resulted in more sophisticated diamond clarity and color treatments. Some modern treatments, though, have a significant drawback: they can improve a diamond’s appearance, but may not be permanent.

The bottom line for you: while wholesalers and retailers are obliged to disclose presence of treatments, when shopping for a diamond it’s still wise to ask for a diamond that has been graded by GIA or another lab with the equipment to detect sophisticated treatments. Here’s a quick overview of some of the more common treatments. 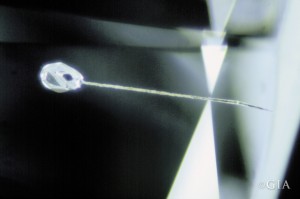 In this close-up of a laser-drilled diamond, you can clearly see the drill hole between the surface and the inclusion, which was bleached to be less visible.

Fracture filling:
Infusing molten leaded glass-like substance into a diamond’s fractures – is the most common diamond treatment used to enhance clarity. Fracture filling of surface reaching breaks can effectively disguise these features. It might also benefit a customer who accidentally cracks a diamond. The treatment can last for years with proper care, but the filling can be damaged during common jewelry repairs, or if subjected to repeated cleanings with steam, acid or ultrasonics. If the filler melts and leaks out, there is a possibility that it can be retreated. If the filler turns dark, it cannot be made colorless again. Fracture filling can make a diamond look more attractive, but also slightly lower its color. 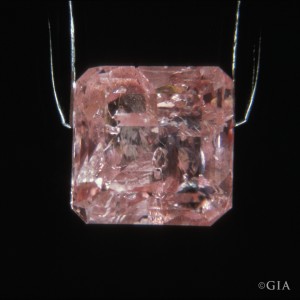 The many white fractures in this 1.39 ct Fancy Intense pink emerald-cut diamond detract from the color. After this diamond was subjected to several episodes of fracture filling, most of the fractures appeared to be transparent and the stone revealed a highly saturated pink color in the face-up color-grading position.

Irradiation:
Irradiation can produce green, blue, brown, yellow, black and other colors. Sometimes this process will be followed by annealing. Irradiated diamonds are sensitive to heat and jewelry repair procedures, recutting, and repolishing can change their colors.

Annealing:
This is a controlled heating and cooling process which is often used after irradiation to change a diamond’s color to brown, orange, or yellow. It has been reported to produce pink, red, and purple colors as well. When annealing is used by itself, it can change the color in a series – generally blue to green to brown to yellow. The treatment is stopped when the desired color is reached. If heat is later applied to an annealed diamond during routine jewelry repairs, it can drastically alter its color. 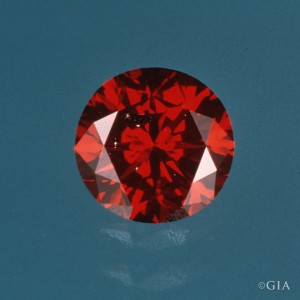 This 0.55-ct brownish orangey-red round brilliant cut synthetic diamond was treated by irradiation and annealing to produce its red color.

High Pressure, High Temperature (HPHT):
HPHT treatment uses machines that are essentially the same as those used to grow synthetic diamonds. The HPHT process can turn some brownish diamonds colorless or transform these brownish stones into other colors like yellow, greenish yellow or green. This process is also associated with pink, blue, and orange-yellow diamonds. HPHT is considered a permanent process. Sometimes it is followed with annealing and irradiation which can yield pink-to-red to purple colors. 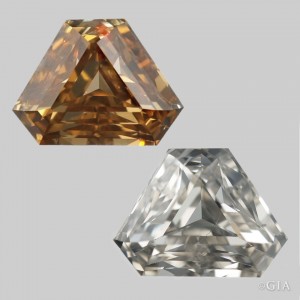 These images show examples of diamonds before and after HPHT processing.

Coatings:
Silica coatings can be applied to polished colorless or near-colorless diamonds to produce a variety of natural-looking fancy colors, including pinks, oranges, yellows, blues, and purples. The coating is fairly durable but not permanent. Coated diamonds can be damaged by heat and chemicals during jewelry repairs and polishing. They can also be scratched.

A variety of colors can be produced on polished diamonds by a new coating technique from Serenity Technologies, Inc.

The use of advanced technologies to treat diamonds makes detection more difficult, and requires the use of sophisticated instruments found only in the most well-equipped research and grading laboratories – like GIA.