There’s something deliciously sinister in the air, and you can find it haunting books, movies, and even luxury jewelry.

What was popular in 2014 tells part of the tale.  Vampire Academy and Lost in Love (another vampire thriller) hit the big screen. Vampire: Most Wanted made The New York Times best-seller list in March, as did the werewolf thriller, Dark Wolf, in January. Disney topped it off by launching the Maleficient collection – a limited collection of jewelry inspired by the villainess in the eponymous movie. Many of the pieces are in blackened metal and feature dragons and snakes.

The fascination with the dark and dangerous, not surprisingly, are influencing how animals are depicted in luxury jewelry. You can still find cute rabbits and robins, but more bewitching creatures lurk beside them in display cases.

With its long and lifelike legs, this piece by Nicole Landaw is an arachnophobe’s nightmare – and makes a bold fashion statement. Courtesy of Nicole Landaw Jewelry.

“Dark depictions of animals appeal because they are mysterious and strikingly beautiful.  They also let the wearer show that they have an edgy side,” says GIA Exhibit Developer McKenzie Santimer. Jewelry designer Philippa Holland adds, “Some of these creatures are deadly, yet are masked by their delicate, seductive beauty.”

Are you ready to explore the jungles of jewelry? Join us as we enter the woods to see what we can find. 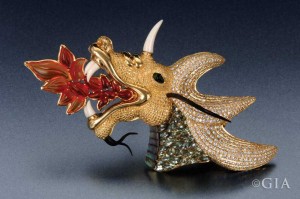 This contemporary dragon has an engraved golden head with ivory horns and trailing whiskers of elephant hair. Its pointed crest is pavé-set with diamonds and its scaly green sapphire neck has a soft mother of pearl underside. The dragon’s reptilian eye glitters with a tsavorite inlaid with black onyx; its fiery breath pours out in a cloud of Mexican fire opal. 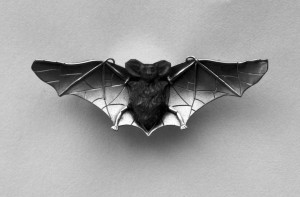 What better creature to capture the spirit of Halloween than a bat? The veins in the wings and the hair in the body make this piece particularly realistic. 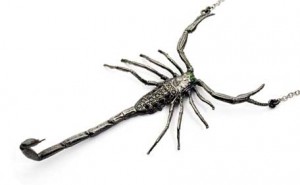 Inspired by Darwin and the Victorian era, Phillipa Holland made a replica of a scorpion by casting one in gold and silver. The stinger poised to strike and the piercing green eyes make it downright scary.

The appetite for the awful is unlikely to end in 2014. There’s always a place in our hearts for the hair-raising, so expect more wild things to show up in display cases everywhere in 2015.

Looking for jinxed gems? Check out opal at the GIA Gem Encyclopedia.