With the return of The Great Gatsby, which is in theatres now, we’re reminded of the Roaring Twenties, a time of prosperity in the United States. Skyscrapers sprung up in major cities, jazz rang out from speakeasies and Charles Lindbergh made the first non-stop transatlantic flight. It was a decade known for automobiles, radios, telephones, skyscrapers, and flappers.

The role of women was also changing. Entering the workforce en masse during World War I, women gained their right to vote in 1920. During this time, women wanted a new style, something that complemented their modern mentality and new freedom. Enter Art Deco, a style that celebrated the machine age and symbolized the opulence and advancements synonymous with the decade. 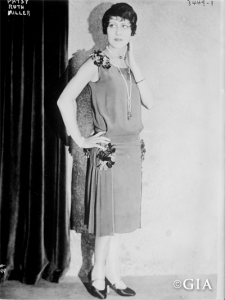 Art Deco jewelry evoked elegance and sophistication. Departing from the soft curves of the earlier Art Nouveau movement, Art Deco featured linear lines and geometric patterns such as arcs, circles, triangles, squares, and rectangles. These stylistic choices reflected the futuristic feel of this progressive society as seen in these platinum, emerald, sapphire, and diamond chandelier earrings. 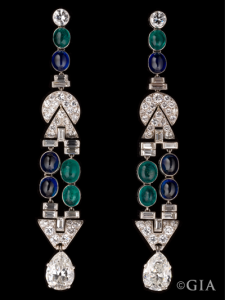 Jewelry featured platinum and white gold as well as bold color contrasts, a stark contrast from the pastels of Art Nouveau jewelry and colorless stones of Edwardian jewelry. Some popular Art Deco colored gems included emeralds, sapphires, onyx, coral, jade, and rock crystal quartz as well as diamonds and rubies, which can be seen in this jewelry set by Mauboussin, circa 1930. 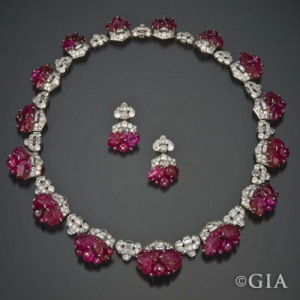 Art Deco carved ruby and diamond necklace and earrings by Mauboussin circa 1930. Image courtesy of a private collector.

Design elements from ancient cultures also played a large role in Art Deco design. Robert Ackerman, instructor of Jewelry Manufacturing Arts at GIA Carlsbad says that: “Art Deco artists were simultaneously taking from the past and looking to the future. This was a unique combination, and created a distinctive style that gripped the imagination of the public.” Inspiration was taken from artists like Michelangelo and Rembrandt but also from Egyptian art and architecture, as seen in this belt buckle, circa 1920. 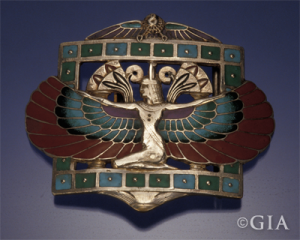 Because of technological advancements, the 1920s became a time for sophisticated jewelry design. New steel tools cut gemstones more accurately, electric engines mechanized polishing wheels used for faceting, and abrasives allowed for finer trimming.  These innovations made it possible for jewelers to create pieces with complex designs such as the one seen in this platinum, sapphire and diamond pendant. 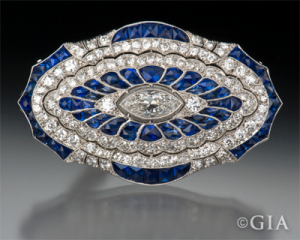 Though nearly a century has passed since its birth, Art Deco is still very much alive and well. The influence of Art Deco can be seen in the recent Tiffany & Co. catalog and high-end jewelry stores. In fact, Rolls-Royce recently released a statement saying, “In homage to this golden age we have created three Rolls-Royce Art Deco cars…these highly bespoke motor cars are inspired by the timeless designs, colours and motifs of the movement.”

Art Deco jewelry promises a bright future and for that we will be forever enamored. F. Scott Fitzgerald hit the nail on the head when he penned: “Gatsby believed in the green light, the orgiastic future that year by year recedes before us. It eluded us then, but that’s no matter— tomorrow we will run faster, stretch out our arms farther. . . So we beat on, boats against the current, borne back ceaselessly into the past.”

If you are interested in seeing the contrast between Art Deco and Art Nouveau jewelry design, check out “Art Nouveau Jewelry”.