A strand of pearls is one of the most glamorous pieces of jewelry a woman can wear, yet these lustrous beauties have humble origins.

Pearls are produced by mollusks – soft-bodied saltwater or freshwater animals possessing one (univalve) or two (bivalve) shells. Mollusks are invertebrates meaning they lack a spine or vertebrae. Scientists estimate there are over 100,000 different species of mollusks in the world’s waters. However, only a few dozen of these species produce pearls and only about half of them are used to produce cultured pearls.

Natural-colored cultured pearls from around the world. Courtesy of King’s Ransom.

Pearl formation happens when a foreign body becomes lodged inside the mollusk’s mantle (an organ similar to skin that forms the lining of the mollusk’s shell). The mollusk forms a sac around the irritant and then secretes nacre around it. As the layers of nacre build, the pearl grows. Depending on the type of mollusk, it can take from six months to seven years for the pearl to form.

Four species of mollusks are primarily used to grow cultured pearls. Each species is famed for producing a stunning specimen. Below is a handy guide about the pearl-producing mollusks: akoya, Tahitian, South Sea, and freshwater. 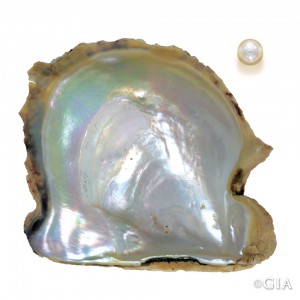 Made famous by Kokichi Mikimoto, akoya cultured pearls are from the saltwater Pinctada fucata oyster. These oysters produce white and cream-colored pearls, generally between 2 and 11 mm in diameter, with the average being 6 to 8 mm.

White and cream-colored pearls were fashion mainstays until the arrival of the Tahitian cultured pearl in the mid-1970s. These dark spheres with exotic colors were dramatically different than their white and cream-colored predecessors and caught the attention of fashionistas. They remain so sought-after that designers often create single-pearl pendants or mix them with other pearls to keep them affordable.

The saltwater Pinctada margaritifera is native to the islands of Polynesia. The mollusk produces pearls in colors sometimes described in the trade with names like aubergine (dark grayish purple bodycolor), pistachio (yellowish green to greenish yellow bodycolor), or peacock (dark green-gray to blue-gray bodycolor with pink to purple overtones). Size ranges are generally between 9 to 14 mm, with the most common diameters between 9 and 11 mm.

South Sea cultured pearls are produced by the Pinctada maxima. The largest of all saltwater cultured pearl oysters, it can produce pearls from 8 to 20 mm in diameter – the average is 13 mm. There are two types of Pinctada maxima oysters – silver-lipped and gold-lipped. The silver-lipped type produces pearls that are mostly white to silver, sometimes with pink, blue or green overtones. The gold-lipped type produces mostly yellow to orangy yellow pearls, called “gold” or “golden” in the trade. 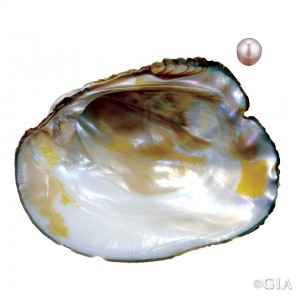 Freshwater cultured pearls are produced primarily in China in lakes, ponds and rivers. They come in a variety of shapes and natural colors including white, orange, lavender, and purple. They are also dyed in a wide array of colors. Designers love the variety of colors and shapes and create strands of cultured pearls sometimes graduated in size and color.