Everyone loves a good Halloween scare, so we scoured the gemological literature for stories about cursed gemstones. Here are a few tales we dug up about these bone-chilling beauties. 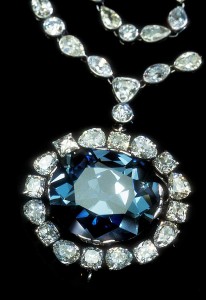 The Hope Diamond is one of the world’s most famous diamonds – but it has an equally notorious history.

In 1839, a life-long bachelor, Henry Philip Hope, an Englishman who owned the stone, died and left his estate to his nephews. Lord Francis Hope, a distant relative, inherits the stone in 1887 and is the last member of the Hope family to own it. Francis had a scandalous marriage to an American singer and actress, and he ended up squandering his fortune. He had to sue his family in order to get legal authority to sell the diamond in 1901.

Evalyn Walsh McLean acquired it in 1911 from Pierre Cartier. Even before the Hope Diamond came into her possession, McLean’s life was beset by tragedy: her brother was killed in the same accident that left her with a shortened leg; her son died at the age of nine; her daughter overdosed on sleeping pills and died; and her husband fell in love with another woman, which led to his nervous breakdown

Pierre Cartier also had a hand in spreading the legend. He told McLean that the Hope Diamond was cursed and was unlucky to all who came in contact with it. Harry Winston, who donated it to the Smithsonian Institution in 1958, seemed to disagree: he sent the Hope Diamond to Washington, D.C., by regular mail.

The Koh-i-Noor is another diamond with a less than stellar  reputation. For several centuries, it had a tumultuous history and was passed from the hands of one  Mogul warlord to another. The British sailing crew that transported it to London in 1850 suffered from cholera, storms, and starvation.  Superstitious government officials and intellectuals of the time continued spreading rumors. Our personal choice for the best legend: the owner of the Koh-i-Noor would rule the world, but any man foolish enough to wear it would suffer misfortune.Some 150 years have passed, and no British king has ever worn the Koh-i-Noor. Is it all just a coincidence? We’ll leave that up to you to decide. 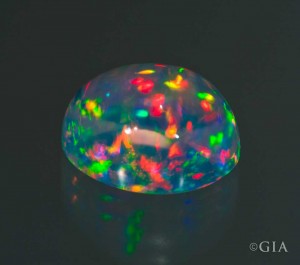 Are there spirits lurking in this opal, or is it just the gemstone’s spectacular play-of-color? Photo Robert Weldon/GIA.

Opals earned a bad reputation thanks to Sir Walter Scott’s novel, Anne of Geierstein. In the story, Hermione, an enchanted princess, died after her opal was wetted by holy water. And so, the opal became associated with misfortune.

Fear about the opal, though, predates Scott’s novel, going back to at least the 16th century, when it was thought to be an embodiment of the Evil Eye. The Evil Eye was the belief that certain people with supernatural powers could cause harm with as little as a glance.

When the hill people of Kashmir fought their British rulers in 1892, they came up with an ingenious idea. Since the red color of the garnets resembled the color of blood, bullets made of red garnets would probably be deadly.  This belief, however, was insufficient to dislodge the British from India. Indian independence would not happen until almost six decades later .

Gemstones have traditionally been viewed as being talismans of good luck, health, wealth, and more. Visit the GIA Gem Encyclopedia to learn about their gentler side.