Humans have long dreamed of flight and flying creatures. Artistic representations of the mythical griffin, a lion with eagles’ wings, date back to before 3000 BCE. Sprites and pixies have fluttered across centuries and cultures. Dragons are found in the folk tales in Asian countries like China and Japan as well as in Europe.  It’s no wonder that jewelry designers who, like all artists, find inspiration in what moves us most, are enthralled by the spirit of flight, and use it as a recurring motif in jewelry.

A muscular creature rippling with vitality, the griffin in this 19th-century French 18k gold brooch looks ready to defend the precious treasure it guards. Diamond-set wings and a natural pearl dangling from its mouth make this griffin as beautiful as it is fierce.

A butterfly flitting from leaf to branch is a sight certain to charm. Buzz Gray and jewelry designer Bernadine Johnston have used butterflies as one of their signature design motifs, turning the colorful insect into a bejeweled still life. 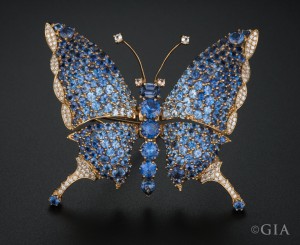 Diamonds and benitoite decorate the wings of this majestic flier. The eyes are made from orange benitoite and the antennae are colorless benitoite. Buzz Gray cut the gemstones. Photo by Robert Weldon/GIA, courtesy Buzz Gray and Bernadine Johnston

Other flying insects are also a source of inspiration and can ignite a designer’s imagination. An unidentified artisan from the Victorian Era (1837-1901) gave his creativity free reign when he created this scarab beetle lapel watch. 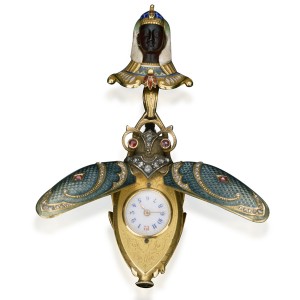 This lapel watch, circa 1865, features a pharaoh’s head of carved carnelian with a headdress of green and blue enameled gold sitting atop a pendant in the form of a scarab with diamonds set in enameled wings and ruby eyes. This beetle is one of the most unusual bugs you’ll ever see.

There are at least 10,000 varieties of birds. Elegant and graceful, they are a natural inspiration for jewelry designers. The French jewelry houses of Sterlé and Mauboussin are two notable examples. 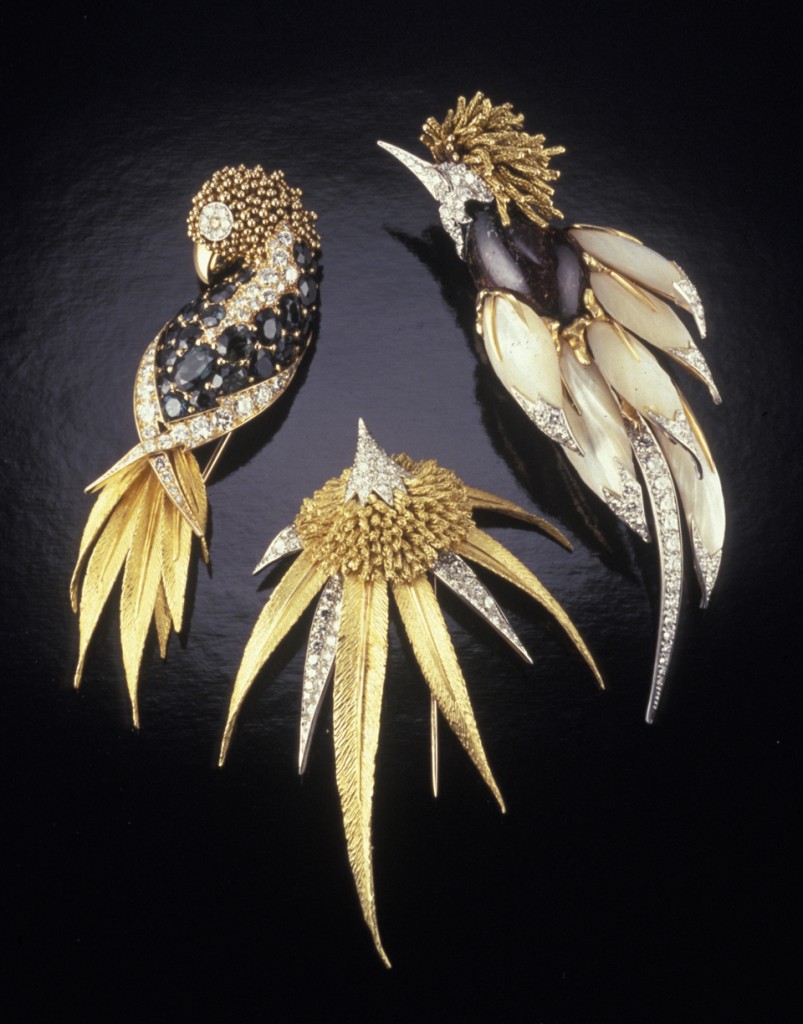 The Sterlé 18k yellow gold brooch above on the right has a cabochon tourmaline body, carved mother of pearl feathers, and a platinum and diamond head. The Sterlé 18k yellow gold brooch on the left has a pavé white and yellow diamond eye, a green sapphire body with pavé diamond folded wings. The nest pictured on the bottom, also by Sterlé, is made of 18K yellow and white gold with pavé-set diamonds. 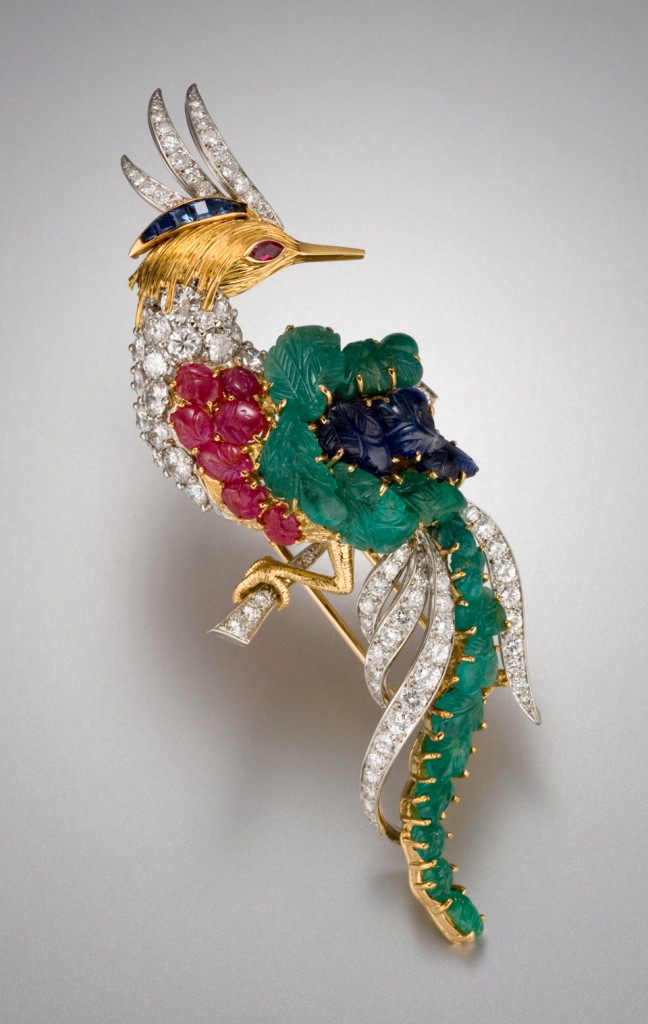 Photo © GIA and Tino Hammid, courtesy of a private collector.

A “Bird of Paradise” platinum and 18k yellow gold clip/brooch (circa 1945) by Mauboussin bears the house’s signature style of chunky, brightly colored gemstone brooches. With its rubies, sapphires, and emeralds, the bird is also a colorful example of Tutti Frutti (also called fruit salad) style, which was popular during the Art Deco Era. 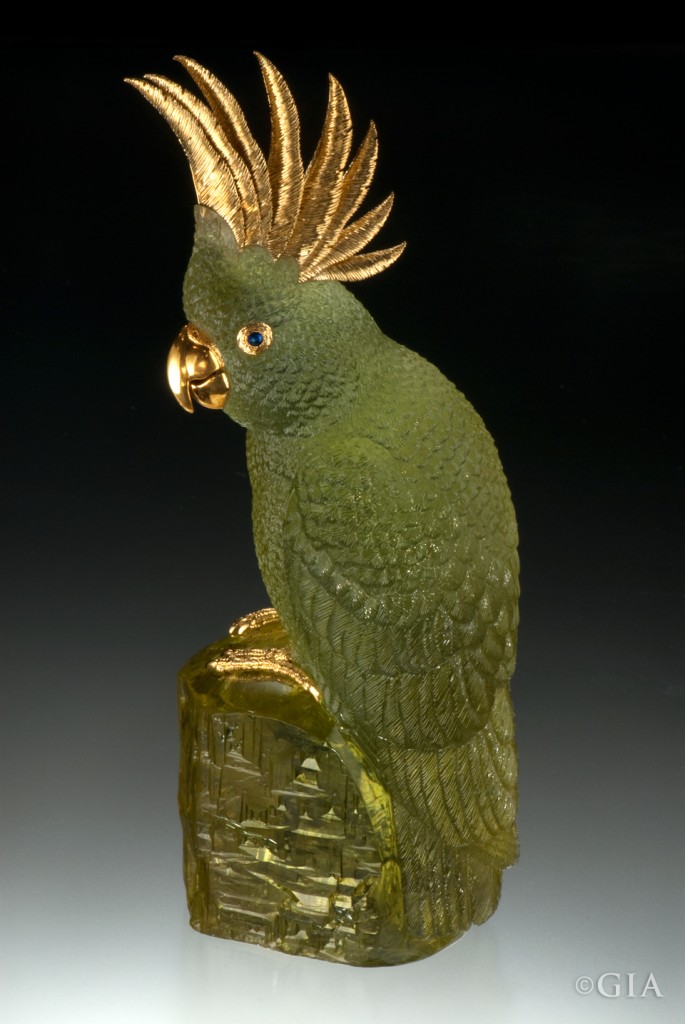 German lapidary Gerd Dreher turned a heliodor crystal (golden beryl) into an objet d’art by carving it into a cockatoo. The rough crystal weighed 1,350 grams. After carving, the finished piece weighs 838 grams and stands 85 millimeters high. The life-like appearance of the bird and the detailed gold feathers are impressive.

“Freedom’s Flight,” a neckpiece  designed by Paula Crevoshay, is a modern interpretation of humanity’s timeless desire to soar to higher realms. The Montana agate wings (260.35 ct) and Mexican fire opal body (33.94 ct) were carved by Lawrence Stoller. The neckpiece is also ornamented with citrine, zircon, and a Tahitian pearl.

Beasts. Birds. Bugs. Man’s imagination laid out in myth and Mother Nature have made a seemingly endless variety of creatures that take to the sky. With such abundant inspiration, jewelry designers will keep looking skyward to create wearable works of art for the Earth-bound.

Want to see more winged wonders? A kaleidoscope of butterflies is waiting for you.