The Orlov, a large rose-cut diamond, has been described as being shaped like half of a pigeon’s egg. It is the fourth in our Famous Diamonds series.

Very little is known about the Orlov’s early history, other than it likely originated in the Golconda region of India. However, the diamond is surrounded by colorful lore. According to one legend, it was stolen from the great temple at by a deserter of the French army in the 1700s. Others contend it belonged to Nader Shah, ruler of Persia, and was stolen following his assassination in 1747.

According to one legend recounted by Jean-Baptiste Tavernier, the diamond was taken from the temple of Srirangam in Mysore. Some stories say that it had been stolen from the temple by a deserter of the French army in the 1700s. Others contend that it belonged to Nader Shah, king of Persia, and was stolen following his assassination in 1747. 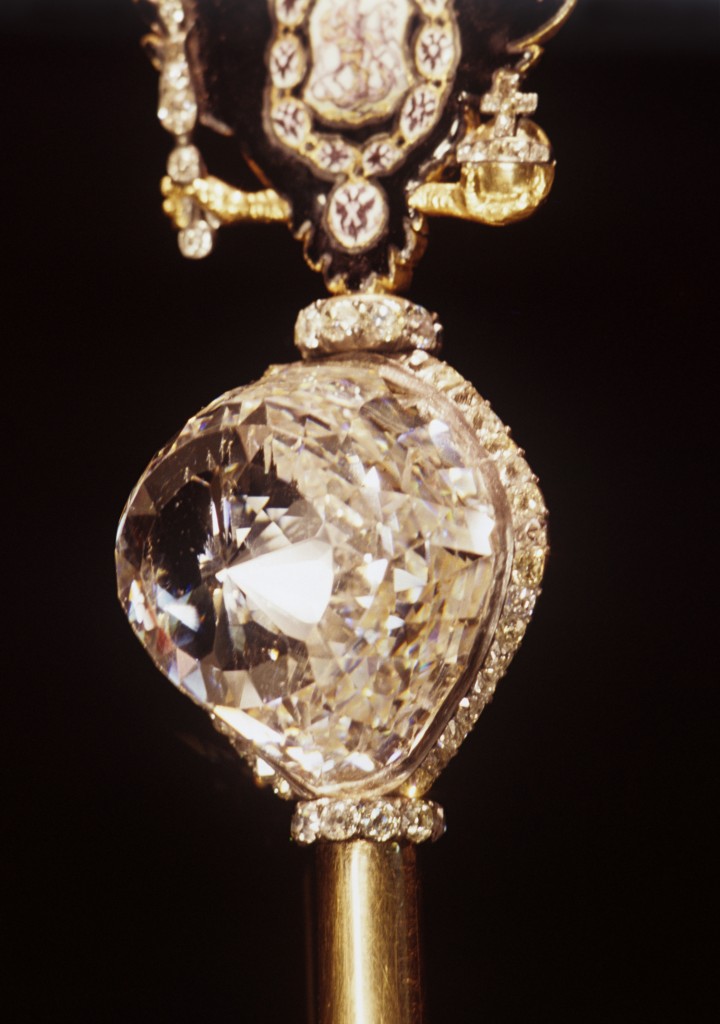 Legend says was pried from the eye of an idol in India in the 1700s by a deserter from the French army. Photo: M. Nachinkin, Courtesy: RIA Novosti

Its documented history begins in the early 1770s when the diamond was acquired by Count Grigory Grigoryevich Orlov for his lover, Russian Empress Catherine II, known as Catherine the Great, who reigned from 1762 until her death in 1796. While the gift was unsuccessful in maintaining Catherine’s affection for him, his name will forever be associated with one of the greatest diamonds in the world.

In 1774, Catherine II had the Orlov set in the Imperial Sceptre, where it remains to this day. Because the diamond is mounted, it has not been accurately weighed. Although, based on old records, it is thought to be approximately 190 carats. As part of Russia’s regalia, the Imperial Sceptre is in the collection of the Diamond Fund and it is on display at the Kremlin Armoury in Moscow.

Learn about The Elizabeth Taylor Diamond, Cullinan II, and Koh-i-noor, all part of our famous diamonds series.