The Cullinan II is a 317.40 carat (ct) cushion cut diamond and the centerpiece of the British Imperial State Crown. Do you know the history behind this beautiful diamond?

This famous diamond is also known as the “Lesser Star of Africa” because it is the second largest stone cut from the great Cullinan diamond found in South Africa in 1905. At 3,106 ct, the Cullinan, named after Thomas Cullinan, Chairman of the Premier Diamond Mining Company, is the largest rough diamond ever discovered. It was presented to Edward VII, King of the United Kingdom of Great Britain and Ireland, as a birthday gift on November 9, 1907, from the nation of South Africa. 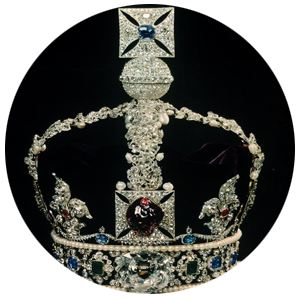 The King had the Cullinan Diamond cut into nine large diamonds and 96 small brilliants. The largest diamond, Cullinan I (also called the Great Star of Africa), is set in the Sovereign’s Sceptre, and the Cullinan II is set in the front of the band of the Imperial State Crown. We’ll discuss the Cullinan III and IV in a later installment of our Famous Diamonds series.