If you’re shopping for a diamond engagement ring, you’ve probably heard about diamond fluorescence, along with varying opinions about its pros and cons. Let’s dig into a few common myths about fluorescence and D-to-Z color diamonds.

Myth #1: All diamonds fluoresce
FACT: The majority of diamonds do not fluoresce. In a study of more than 26,000 diamonds submitted for grading to GIA, researchers found that only approximately 25% to 35% of them exhibited some degree of diamond fluorescence when examined with a standard long-wave UV lamp. So, it’s likely that the diamond you’re eyeing does not fluoresce.

Myth #2: You can see diamond fluorescence – no matter the lighting
FACT: Diamonds that fluoresce only do so when they are exposed to invisible UV rays and other higher energy radiation sources such as X-rays and lasers. You might see your diamond fluoresce under a bright sun, in a tanning bed, at a dance club or in other places where strong fluorescent or black lights are used. But once the light source is removed, the diamond will stop fluorescing. Incandescent lighting will not cause a diamond to fluoresce. 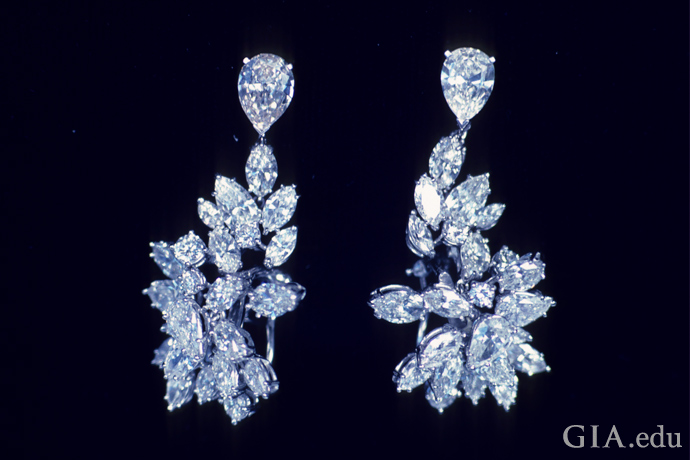 When viewed with incandescent light, all the diamonds in these earrings appear to be the same color. Photo: GIA

When viewed with a UV lamp, the diamonds in the earrings show different degrees of diamond fluorescence. Photo: GIA 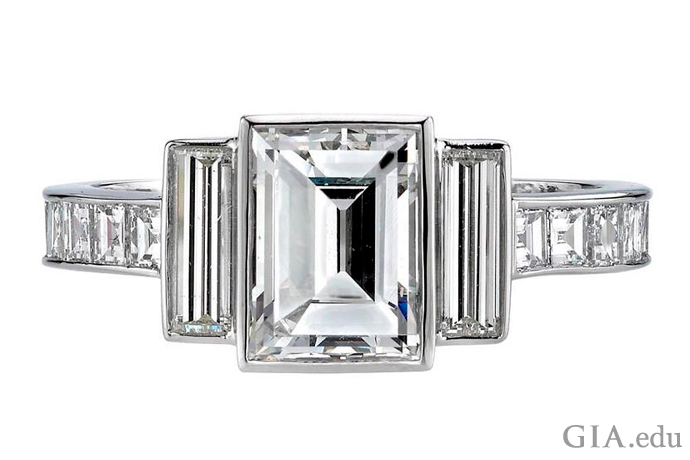 Fluorescent or not, this 1.42 carat (ct) diamond engagement ring, with diamonds lining the band, captivates with its bold, clean lines. Courtesy: 1stdibs.com

However, the way you perceive a diamond’s color grade may be affected by the extent to which it fluoresces – in a positive way. In a diamond lower on the GIA D-to-Z color scale (say, I to N) with a yellow tint, moderate-to-strong blue fluorescence may cancel out some of the yellow for a better color appearance than what its color grade would indicate. See Myth #7.

Myth #6: Diamonds only show blue fluorescence
FACT: Diamonds can fluoresce in a variety of colors. These include orangy yellow, yellow, orange, red, white and green. Variations in the atomic structure, such as the number of nitrogen atoms present, cause the phenomenon. Blue, however, is by far the most common color of diamond fluorescence. 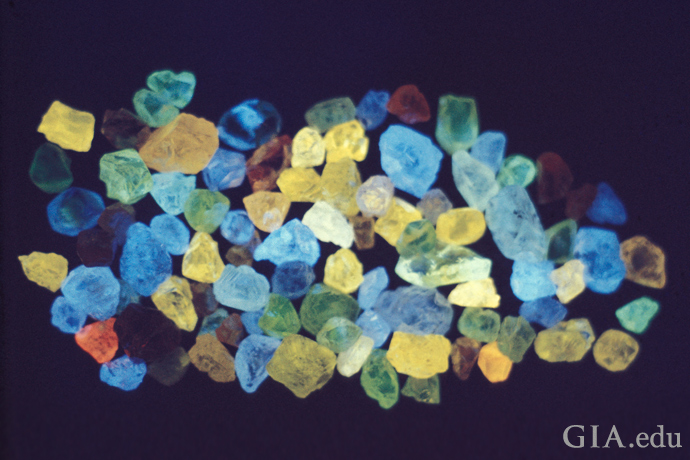 These rough diamonds exhibit a range of colors when exposed to UV light. Photo: GIA

Myth #7: Strong blue diamond fluorescence is bad
FACT: GIA studied the influence of blue fluorescence on the appearance of a diamond under normal viewing conditions. The Institute found that average observers (meant to represent the jewelry buying public) could not consistently discriminate any fluorescence-related effects in the viewing environments most similar to those in which jewelry is purchased and worn.

However, GIA also found that strong blue diamond fluorescence could be beneficial. The results of its study revealed that, as noted for Myth #4, some strongly blue fluorescent diamonds were perceived to have a better color appearance than their color grade would suggest when viewed table-up, with no discernible trend table-down. 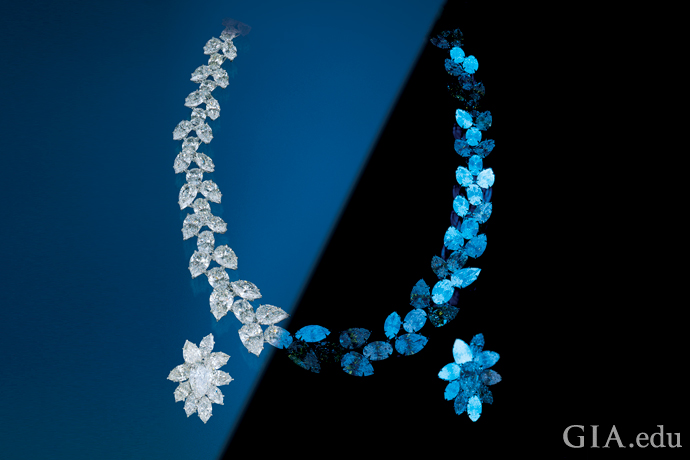 Bejeweled fireworks: Half the diamonds in this necklace (132 carats total weight) and the one earring (3.20 ct center stone) in this composite photo are shown under normal lighting conditions (left), and the other half of the necklace and the same earring are shown as they appear under a long-wave UV lamp (right). Composite photo: Harold and Erica Van Pelt/GIA. Courtesy: Harry Winston Inc., New York

A diamond’s sparkle is determined primarily by its cut, not by whether the diamond fluoresces or not. A diamond’s cut – that is, the angles and relative measurements of its facets, as well as its other proportions, design and craftsmanship – determines how well light performs when it strikes the diamond and how well it will sparkle. 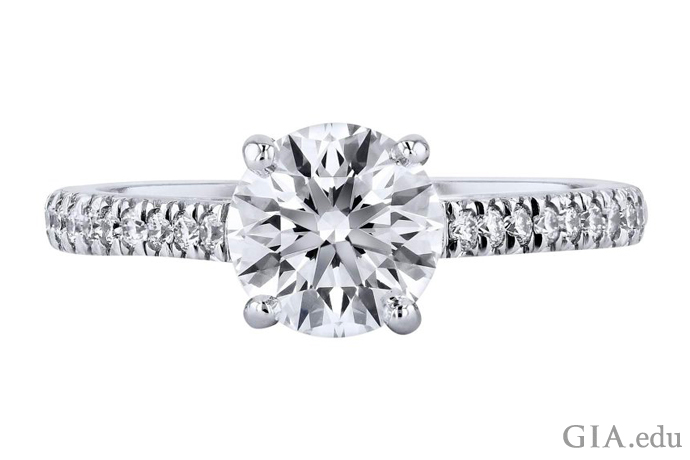 Even strong blue fluorescence would not affect the beauty of this 1.29 ct E color diamond engagement ring in normal lighting. Courtesy: 1stdibs.com

MYTH #9: Fluorescence means the diamond is a “real” natural diamond
FACT: Absolutely not. The presence or absence of fluorescence should not be used as a DIY test to determine if your diamond is real. First, not all natural diamonds fluoresce under the standard UV lamp used by gemologists (see Myth #1). Second, some synthetic or lab grown diamonds do fluoresce to these wavelengths. Although differences have been noted in the intensity, color and pattern of fluorescence between natural and synthetic diamonds, there is overlap. Finally, some materials used to impersonate diamond – like cubic zirconia – can display fluorescence.

Synthetic diamonds made by the chemical vapor deposition method may display strong pinkish orange fluorescence (among other colors), with regions of strong blue or violet, when exposed to high-intensity ultra-short wavelengths. Photo: Wuyi Wang/GIA

Myth #10: Fluorescence can make a diamond less durable
FACT: A diamond that fluoresces under a standard UV lamp has the same structural integrity as one with no reaction to it. Nothing in the submicroscopic structures that cause fluorescence inherently weakens the diamond.

Myth #11: Diamond fluorescence does/doesn’t affect value
FACT: Jewelry professionals disagree about whether fluorescence adds to or detracts from the value of a diamond. Some trade professionals believe those very rare diamonds at the high end of the D-to-Z color scale that have extremely strong blue fluorescence are worth less than their nonfluorescent counterparts because the fluorescence can affect their transparency by giving them a hazy or milky appearance. Conversely, some traders pay higher prices for blue-fluorescing diamonds of a lower color grade because, as noted above, they believe the fluorescence masks the faint to very light yellow color of these diamonds.

Diamond fluorescence and its effect on value is not a simple question, and there isn’t a simple answer. We recommend that you compare diamonds in a variety of lighting environments and choose the stone that you like best. Ultimately, GIA believes the beauty of a diamond is truly in the eye of the beholder.

Wouldn’t it be awesome if this 1.67 ct center diamond fluoresced in a night club? Courtesy: 1stdibs.com