With the current popularity of period pieces—fueled in part by films and shows like The Great Gatsby and Downton Abbey–there is a rising interest in vintage fashion and jewelry. The Edwardian period lasted from 1900 to 1915, when England was flush with power and wealth. For the landed gentry (land owners who could live entirely off of rental income), the Edwardian Era was a period of prosperity and privilege; however, class divisions were equally stark.

The Victoria Baths in Manchester had separate entrances for first-class males, second-class males, and females. The Titanic, the most luxurious and largest ocean liner of its time, further illustrated this divide with its First, Second, and Third Class cabins. The arts in Great Britain, including jewelry design, served a definite purpose during the Edwardian Era to reinforce the class system.

Unlike Art Nouveau jewelry, which in part was a backlash to the Industrial Revolution, Edwardian jewelry drew inspiration from King Edward VII and his admirers, who wanted todistinguish themselves visually from those belonging to lower social classes. As GIA instructor Robert Ackermann puts it: “Jewelry was a preferred way to show one’s rank in society. Only the upper classes could afford it, and they advertised their wealth and position by wearing exquisite works.”

In jewelry, garlands and triumphal laurel wreaths belonging to a conqueror’s crown were common design themes. These regal motifs represented the might of the British Empire and the importance of the wearer. Stately tiaras, pendants, necklaces, and chokers not only captured the style of the day but also carried symbolic weight. For example, it was rude for a lady to wear a taller tiara in the presence of a woman of higher rank. Here’s an example of a diamond, silver, gold, and tortoise shell tiara. 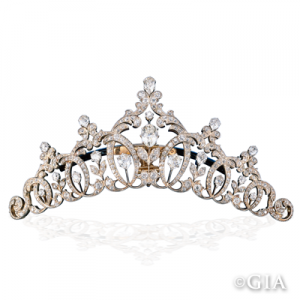 Diamonds, pearls, platinum and symmetrical design defined Edwardian jewelry. Diamonds were abundant due to the discovery of mines in South Africa during the 1880s, and England’s aristocracy quickly fell in love with the glittering gemstone. Symmetry in jewelry design evoked power, stability, and status. Pearls were often showcased in a piece of jewelry. Whether a pearl was dropped in a bed of diamonds or set in platinum, Edwardians considered this combination to be the height of sophistication and elegance, as seen in this pearl, diamond, and cat’s eye alexandrite cabochon pendant. 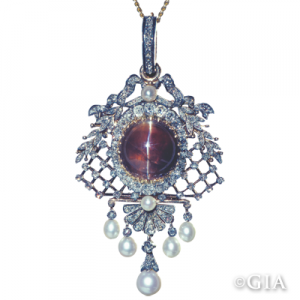 Although many of the customs and class divisions of the Edwardian Era belong to the distant past, the international success of Downtown Abbey proves that we continue to be captivated. To see just how much Edwardian Era jewelry continues to impact contemporary design, check out this video.