When people think of “cut,” they often think of the shape of a diamond rather than its cut quality. Cut is all about a diamond’s fire, sparkle, and brightness, and as a value factor, it refers to a diamond’s proportions, symmetry and polish; those factors that determine the cut quality or the fourth ‘C.’

In January 2006, GIA began assigning cut grades for round brilliant cut diamonds. Based on a comprehensive study that included 70,000 observations on more than 2,300 diamonds, GIA’s cut grading system assigns a diamond a grade of Excellent, Very Good, Good, Fair, or Poor.

A number of complex factors are considered when evaluating a diamond’s cut grade: its proportions, the symmetry of its facet arrangements, and the quality of its polish or finish. The cut grade reflects the diamonds appearance 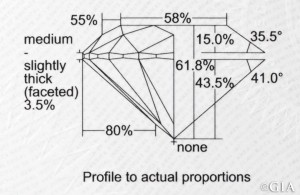 In this post, we’ll focus on proportions – represented by the diamond diagram that appears on all GIA Diamond Grading Reports and GIA Diamond Dossiers. By learning about proportions, you’ll also learn the basics of a diamond’s anatomy, and gain an understanding of one factor that goes into setting a cut grade, determined from a combination of measured parameters.

Before we begin the Diamond Anatomy lesson, let’s be clear that no single proportion measurement is an indicator of what that diamond’s cut grade will be. GIA researchers proved that while every individual facet matters, a diamond’s appearance arises from the combined contribution of all its proportions. Even though all of a diamond’s parameters might be within the limits for a particular grade, a diamond might actually receive a lower cut grade when the parameters interact in a negative way to lessen a diamond’s appearance.

Therefore, for round brilliant cut diamonds, GIA considers how a diamond’s proportions relate to each other, rather than considering individual proportions in isolation. 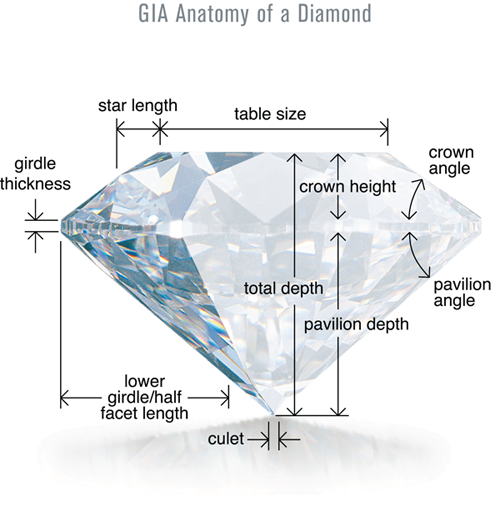 Table Size: The table is the top horizontal facet of the diamond. The average table size is expressed as a percentage of the diamond’s average girdle diameter. While an ‘Excellent’ grade diamond will have a table size between 52 and 62 percent, other proportions are important too. Remember that GIA doesn’t consider individual proportions in isolation.

Total Depth: The diamond’s overall depth from the surface of the table to the culet, expressed as a percentage of the average girdle diameter.

Pavilion Depth: The pavilion is the lower portion of a diamond from the bottom edge of the girdle to the culet. The pavilion depth is expressed as a percentage of the average girdle diameter. A pavilion depth that’s too shallow or too deep will allow light to escape from the side or bottom of the stone. A well-cut diamond will direct more light upward through the crown.

Pavilion Angle: Pavilion angle is another important dimension of the stone, especially as it relates to a diamond’s brightness. It is the average of the angles formed by the diamond’s pavilion main facets and its girdle plane. This should fall between 40.6 and 41.8 degrees to be considered “Excellent,” providing other parameters also fit their proper ranges.

Crown Height: The crown is the upper portion of the diamond, from the top edge of the girdle to the table. The average crown height is expressed as a percentage of the average girdle diameter. It can affect both the dispersion and brightness of a diamond.

Crown Angle: The crown angle is the angle that’s formed where the bezel facets meet the girdle plane. The crown angle in a well-cut diamond will be within 31.5 to 36.5 degrees. The crown angle has a large effect on the face-up appearance of a round brilliant cut diamond. The best range of crown angles provide a route for exiting light dispersion, as well as additional contrasting directions for entering light. Star Length: The horizontally projected distance from the point of the star facet to the edge of the table, relative to the distance between the table edge and the girdle edge. A well-cut diamond will range between 40 to 70 percent, when other parameters are within the correct ranges

Girdle Thickness: The girdle is the middle portion of a diamond, a narrow section separating the crown from the pavilion, and functions as the diamond’s setting edge. The girdle thickness is described as a range from its thinnest to thickest areas. A thick girdle is less desirable because it unnecessarily adds weight to the stone where it matters the least (making the diamond appear smaller). An extremely thin girdle is sometimes referred to as a knife-edge, and results in a diamond that is more fragile and susceptible to chipping. Therefore, a girdle that is “medium to slightly thick” is preferred.

Lower Girdle / Half Facet Length: This ratio is measured by calculating how long the lower girdle facets are relative to the length of the pavilion. This defines the contrast of a round brilliant cut diamond, which controls the brilliance of a diamond. The well-cut diamond will range between 65 to 90 percent. Diamonds with longer lower half facets will have a little more scintillation.

Culet: The culet is the small facet at the bottom of a diamond intended to prevent chipping and abrasion to the point. The culet size can affect face-up appearance and it’s described as the average width of the facet. Size is expressed as none, very small, small, medium, slightly large, large, very large, and extremely large. When there is no culet, it is sometimes referred to as a pointed culet. Preferably the culet will not be visible with the unaided eye, and when described as none (no culet), very small or small on a GIA report, it falls in the excellent range.

Now that you understand diamond proportions, you’re one third of the way to learning about the factors that influence a diamond’s cut grade. We’ll cover finish, polish, and symmetry in later posts.

An “Excellent” in GIA’s cut grading system will tell you what most people prefer. However, our best advice as you shop around is to do what GIA researchers did – look at a number of diamonds. After all, beauty is in the eye of the beholder and your own eyes will tell you whether or not a diamond’s cut is right for you.