We’ve been wearing coral jewelry for at least 30,000 years – an impressive testament to its timeless appeal.

Coral comes in an array of colors: white, cream, various shades of red and orange, blue, a light grayish violet called “lavender” in the trade, and a light, vivid pink color sometimes referred to as “angel’s skin”. There is also black and golden coral. Red coral (sometimes called “ox blood” in the trade) has historically been the most expensive. Gem-quality coral has uniform color.

Chimera bracelet bangle by Cartier (not signed) of carved coral set with diamonds in platinum. Photo © GIA and Tino Hammid.

Coral’s rich lore contributes to its perpetual popularity. According to Greek mythology, Perseus slew Medusa, a hideous monster-woman with venomous snakes for hair. He set her head down on the sand and her blood turned the seaweed into red coral. Ancient Romans thought that coral quieted the waves of the ocean and made it calm. During the Victorian era, coral beads were worn to ward off evil spirits and provide good luck. And cultures around the world have long thought coral to bring to the wearer health, happiness, wisdom, success, and more. 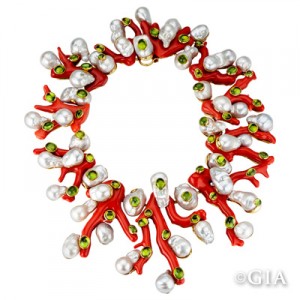 Jewelry designers Tony Duquette and Hutton Wilkinson made creative use of coral in their “Barriera Corallina” coral, cultured pearl and peridot necklace. The natural shape of the coral imparts energy and movement to the piece. Courtesy of a Private Collector

Coral is the name used to describe tiny marine polyps – spineless organisms with a soft body and a protective external skeleton composed of calcium carbonate. Attaching themselves to rocks, these animals multiply to create giant colonies which eventually form reefs.

Coral reefs grow slowly. Atolls, which are ring-shaped coral reefs that surround lagoons, may have started forming millions of years ago. The Great Barrier Reef is a fast-growing reef, and is estimated to be 500,000 years old, with its present reef structure about 6,000 to 8,000 years old.

Pollution, human encroachment, overfishing, increasing ocean temperatures, and rising sea levels have harmed the health of coral reefs. Coral is also being harvested faster than it can grow. As a result red and pink coral sales are now restricted by the United Nations.

Because some species of coral are endangered, the coral trade is regulated by the Convention on International Trade in Endangered Species of Wild Fauna and Flora (CITES). Coral that is offered for sale must conform to local laws and international agreements. Sellers should provide official documentation that proves the origin of the material.

The angel skin coral carving of a maiden on the left, Quan Yin, mirrors the branch of pink coral on the right, suggesting that the carver followed the shape of the piece of coral when he worked.

Because some species of coral can still be legally sold, GIA wants to share facts about qualities to look for, so that you can be knowledgeable in your purchase, should you decide to acquire a piece of coral jewelry.

Ask if the coral has been treated.

A number of treatments can be used to enhance coral’s appearance, including dyeing, bleaching, impregnating with wax, and stabilizing with plastic. All treatments should be disclosed.

Imitation coral is available as an alternative. Because of coral’s increasing rarity, composite and imitation coral (especially imitation red coral) is on the rise. Common coral imitations include glass, various plastics, dyed limestone, ceramics, bone, and marble. Coral is also “reconstructed” from bits and pieces of other coral, glued together with adhesives, and then dyed to create a uniform color. 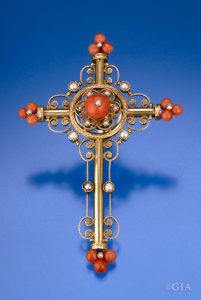 Coral and pearls ornament the tips of this 18K gold reliquary cross. This antique piece is circa 1890.

As coral is a comparatively soft gem material, its hardness is 3 to 4 on the Mohs scale, you’ll want to keep it in its own cloth pouch so that harder gemstones won’t scratch it. It is also porous so don’t wear coral in chlorinated pools or expose it to heat or chemicals (including cosmetics and perfumes) as this can cause it to lose its polish and color. Dyed coral can fade under prolonged exposure to sunlight. Also, don’t use an ultrasonic cleaner or steam cleaner. Instead, clean coral with a soft cloth and briefly rinse (do not soak it) in warm, soapy water.

Cartier designed this carved coral bellflower drop and bead necklace circa 1950. It’s a kinetic piece – the flowers and the stamens wave in the wind. It’s also somewhat unique: No natural opaque gemstone has the soft orange colors of coral. Photo © GIA and Tino Hammid.

There’s plenty for us to appreciate about this organic gem material. Discover why it captivates our imagination through these stunning pieces.