Cupid, whose arrow causes one to fall madly in love, is arguably the mascot of St. Valentine’s Day. If you’re looking for Valentine’s Day jewelry ideas, take a look at the jewelry he inspires and learn some fun facts about the winged matchmaker.

Cupid wasn’t always Cupid: Go back to ancient Greece, and Cupid was called Eros (Greek for sexual love), the god of love. An irresistibly handsome youth, Eros was a mischief-maker, wreaking havoc on the other gods by shooting them with his arrows and causing them to fall in love with the wrong person. 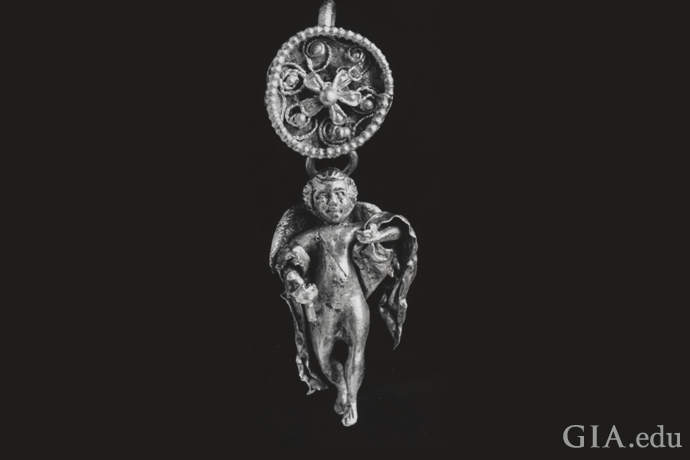 Eros as a young man decorates this pendant from ancient Greece (circa 300 – 400 BCE). Courtesy: The Walters Art Museum. 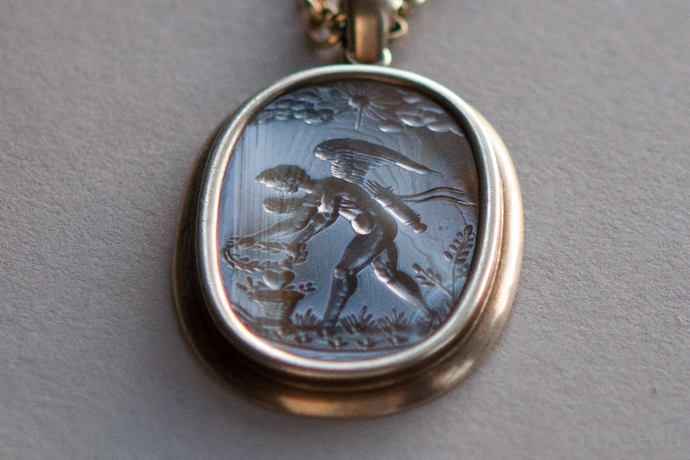 Cupid becomes a child: Romans, around 300 BCE, began depicting the romantic trickster as a child. Images of Cupid (cupido is Latin for desire) adorned the walls in the homes of Pompeii, and later they appeared in paintings and sculptures by Renaissance masters. These works often also contain depictions of cherubs (angels) and decorative putti (male toddlers). But Cupid is the one with the bow and arrow. These formed our modern-day conceptions, which you’ll see in jewelry and other Valentine’s Day mementos.

Cupid is the adorable child in this 18K gold ring with wings studded with 1.90 carats of diamonds. Even his face wears a sweet smile. Courtesy: 1stdibs.com

Cupid has two kinds of magical arrows: An arrow of gold causes the one struck to fall madly in love, according to the ancient Romans. An arrow of lead fills the receiver with revulsion toward their would-be lover. In the myth of Apollo and Daphne, Cupid created chaos when he launched a gold arrow at the boastful Apollo and a lead arrow at Apollo’s beloved Daphne. 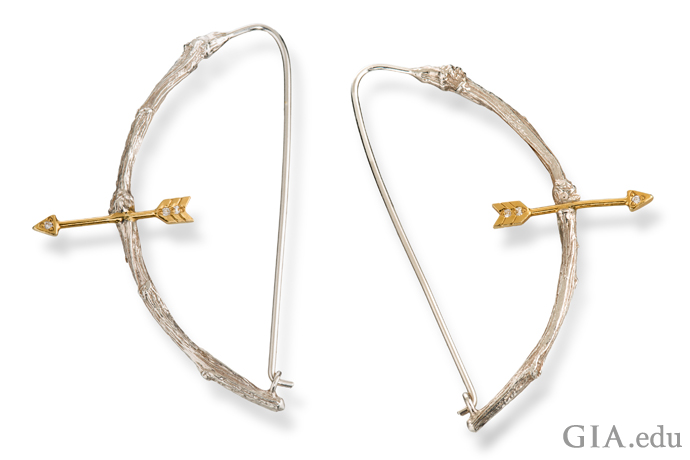 Cupid is only shooting arrows of love in these 18K gold, sterling silver and diamond-accented earrings. A bit of reality is artfully added to the myth: The bow is carved to resemble pieces of knotted wood. Photo: Orasa Weldon/GIA. Courtesy: McKenzie Santimer

Cupid sometimes wears blindfolds: Love is blind, so the saying goes, and Cupid is frequently depicted as being blindfolded. Unable to see, his arrows fly about wildly, bringing together unlikely couples. 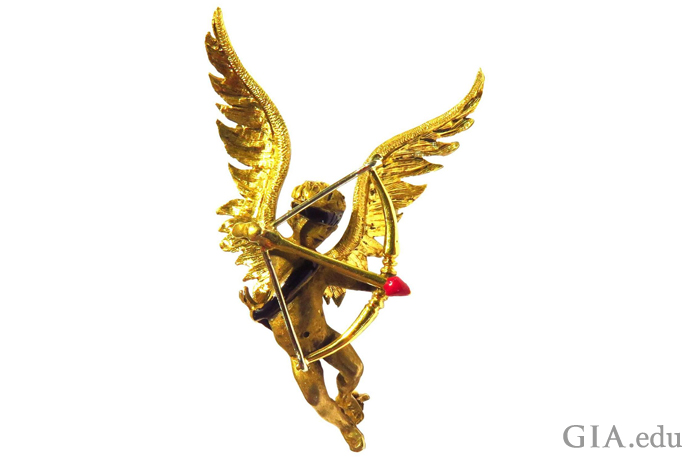 Sometimes Cupid is blindfolded; sometimes he’s not. And sometimes he just sports a blindfold on his forehead – as in this 18K gold pin. His unfurled wings and red-tipped arrow are lovely touches. Courtesy: 1stdibs.com

Cupid reinvented: Cupid is still fluttering around the hearts of lovers and firing the imagination of contemporary designers. Here are some reinterpretations of the myth – they might inspire your search for the perfect piece of Valentine’s Day jewelry. 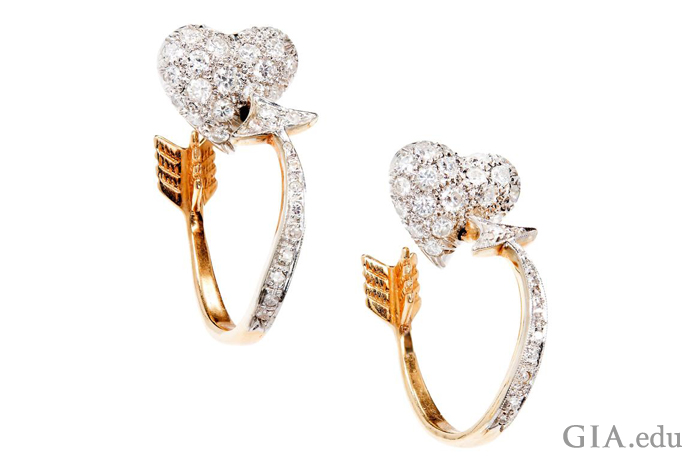 Arrows piercing hearts is a creative way to evoke Cupid. With 1.50 carats of diamonds set in 14K gold, these earrings glow like new love. 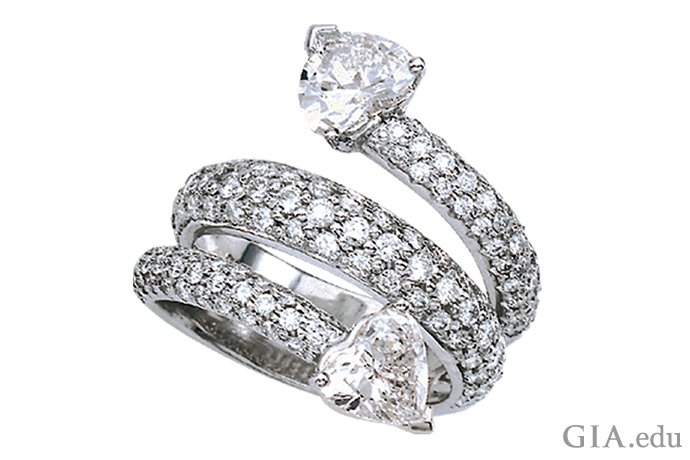 My heart will be wrapped around your finger – so says this platinum ring with two heart-shaped diamonds joined by a coil of pavé-set diamonds. We think Cupid would have approved of the sentiment. Courtesy: Platinum Guild International, USA 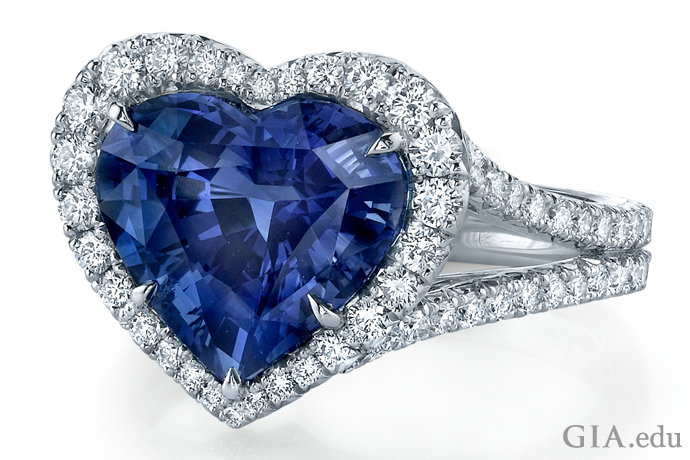 A heart-shaped ring is the essence of Cupid. This one by Omi Privé has a 5.10 carat (ct) sapphire surrounded by 1.22 carats of diamonds. Courtesy: Omi Privé.

Now you can bring the spirit of Cupid to your Valentine’s Day jewelry. Have fun shopping!

Want to learn more about Valentine’s Day and see some breathtaking jewelry? Read our blog on heart-shaped jewelry – you’re sure to fall in love!