The Bowers Museum has curated more than 200 iconic pieces made by the storied jewelry house. Jewelry is organized around four themes: Elegance, Exoticism, Femininity, and Nature. Expect to see remarkable craftsmanship, dazzling gemstones, and a parade of innovative and timeless works. 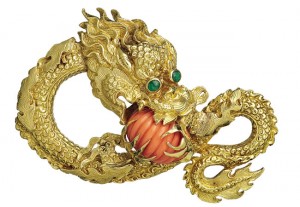 Dragons in the East symbolize power, luck, and strength, while the coral ball represents the pursuit of wisdom. This dragon clip from 1969 is a dramatic example of “Exoticism.” 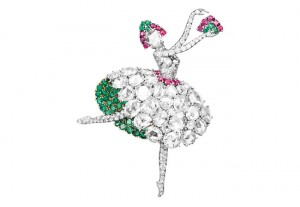 Dancers were one of Van Cleef & Arpels signature pieces, and became a popular symbol of hope during World War II. This Spanish dancer clip (circa 1941) shows the creative use of rubies and emeralds to create visual accents and a sense of depth; the dancer’s face is a single diamond.

Founded in 1906, Van Cleef and Arpels is one of the world’s most prestigious jewelry houses. It has designed crowns for royalty, jewelry for celebrities like Grace Kelly, Marlene Dietrich and Elizabeth Taylor, and popularized the Mystery Setting (no prongs visibly securing the gemstones). 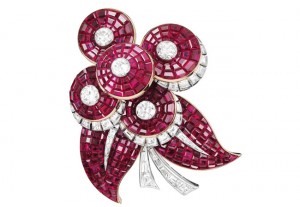 This Mystery Set Pastilles clip (circa 1951) is made of platinum, yellow gold, osmior, rubies, and diamonds. Notice that there are no prongs holdings the stones in place – a feat that required outstanding lapidary skills. 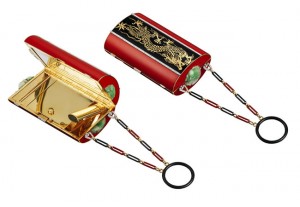 Vanity cases – a trendy alternative to handbags in the 1920s – were another popular object created by Van Cleef and Arpels. Each one had a unique surface decoration that “demonstrated a staggering mastery of jewelry techniques,” according to Van Cleef & Arpels by Sylvie Raulet. 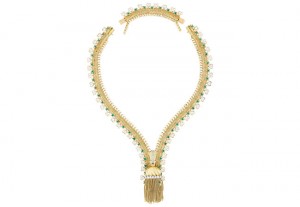 Another iconic piece by Van Cleef and Arpels, this Zip necklace (circa 1955) can be zippered and turned into a bracelet – extraordinary difficult accomplishments when working with gold (which is a soft metal) and fine gemstones. The first piece was made at the request of the Duchess of Windsor.