The June birthstone, the pearl, has a long and rich history. For many young women, pearls are just something you wear when you wanted to look classy and put together. But the unique creation of the pearl, the only gem made from a living creature, tells us that this is an incredibly special little sphere.

Picture the homely and earthy mollusk, living its life quietly under the sea. Along comes a pesky bit of something- maybe a piece of sand or even a wicked parasite. That mollusk secretes a substance called nacre to get rid of that thing! It keeps sending out nacre but of course it cannot rid itself of the irritant. This is lucky for us- over the course of many years, that tiny, nacre-covered speck becomes a luminous, miraculous pearl.

Both royalty and humbler classes alike have worshiped the pearl throughout history. Queen Elizabeth the First, gazing out from one of her many portraits, always had herself liberally covered with huge glistening pearls. And who can forget the Girl with a Pearl Earring? Pearls have long been associated with innocence; the figure in that famous Dutch painting is a perfect example of that. How ironic is it then that Cleopatra, the very essence of exotic seduction, also found pearls much to her liking? She had in her possession two of the largest pearls in the world- one of which she dissolved and drank at the world’s most expensive banquet; the other ended up hanging in the Temple of Venus in Rome.

Considering how much European civilization revered the pearl, it must have been astonishing to discover cultures that used pearls as mere play things! When explorers from Europe finally came to the Americas, they saw pearls used as everyday adornment. Explorers in Polynesia found children using pearls as marbles. To these men, who knew that pearls could only be obtained at a great price from the Persian Gulf and the Red Sea, the New World must have seemed to them a land of vast wealth.

Later, pearls became more accessible to the general public. Rather than searching the sea floor for potential mollusks, three inventive Japanese men learned to introduce an irritant to mollusks in a controlled environment and encourage pearl creation, rather than just hope for it. These “cultured” pearls allow more people to buy and enjoy the beauty of this lovely gem. In fact, 90% of the pearls sold today are cultured, rather than naturally discovered. 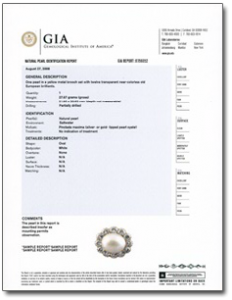 If you have one of these beauties in your possession, a GIA Pearl Report can provide you with a detailed analysis of your pearl. In this report, you will learn much about your pearl, such as its origin – – natural or cultured, its weight and size, and even the thickness of the nacre coating. You also receive a digital image of your pearl. Enjoy your pearls – they are luminous and beautiful, meant to be worn and admired.