The October birthstone, opal, is noted for its individuality, magic, and mystery. Its unique display of flashing rainbow colors is unlike any other gem, and has been compared to volcanoes, galaxies, and fireworks.

Throughout history, its intense visual qualities have made it a source of supernatural beliefs.  Bedouins believed that opals contained lightning and fell from the sky during thunderstorms. Ancient Greeks believed opals guarded them from disease. They’ve even been attributed with the power to preserve blond hair!

An opal’s value is determined in part by its background  color. A darker base with vivid flashes of color is the most desirable, and opals with dark gray to black base color are the most valuable. One famous black opal is the 700 carat stone Napoleon gave his wife and Empress Josephine de Meauharnais called “The Burning of Troy” because of its red flashes against a black  background color.  A more  affordable type of  opal has a white  to medium gray background color, called white opal. 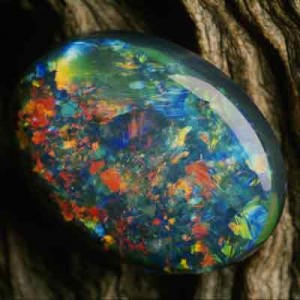 Black opals, like this 29.85 carat gemstone from Australia, are prized for their rarity and fiery color. Courtesy of Mariora, Surfers Paradise, Australia

Another key factor in determining an this gemstone’s value is the amount and distribution of flashing rainbow colors, called play-of-color. Play-of-color occurs because of the interaction of light with its internal structure. This causes light waves to diffract, or bend, resulting in spectral colors that range from , red, orange, yellow, green, and blue. There are two broad classes of opal: precious and common. Precious opal displays play-of-color, common opal does not. 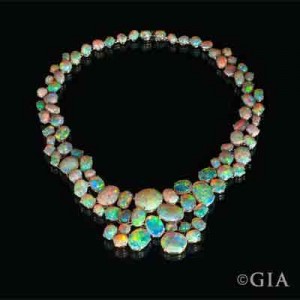 “The Path of Enlightenment” necklace contains 180 opals, and is an excellent example of the vast spectrum of colors found in opals. Courtesy of Impressions Ltd.

These gemstones are some times treated to improve their color. Synthetic opal, created in the 1970’s is available in black, white, and fire opal. You may also run across imitation opals made out of glass (called Slocum Stone) and plastic.

If you’re the fortunate owner of a precious opal, the best way to care for it is with warm, soapy water. Ultrasonic cleaning or steam cleaning are never recommended for this fairly delicate gemstone. With a hardness of 5-6.5 on the Mohs scale, it is softer than many gems and should be treated with care. 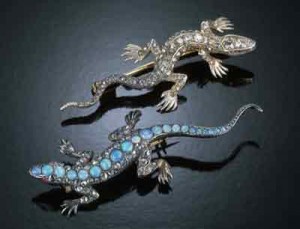 How would you describe the play-of-color found in opals–flashing rainbow, volcano, galaxy, fireworks? Use your imagination to come up with a way to describe this unique phenomenon.