After years of hiding in the watery depths, mermaids, mythical half-human sea creatures, are surfacing everywhere – in a provocative photo shoot in the December 2013 issue of W ; on countless Starbucks’ cups (the mermaid is their corporate logo); in television shows like Mermaids and H20: Just Add Water; Pinterest, Etsy, and on bridesmaid accessories and wedding dresses. 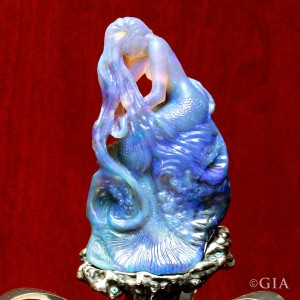 A spray of ocean blues and whites, this mermaid is perfectly depicted in an opal carving.

The myth of the mermaid dates back at least 4,000 years, and is found in virtually every culture. They were often portrayed as temptresses that dragged sailors to watery graves, but recently have been depicted as benevolent creatures.

Mermaids are complex symbols. They were embodiments of feminine power, temptation, forbidden fruit, and death, but have since lost their darker edge – in no small part due to movies and television shows like Splash, Aquamarine, and Pirates of the Caribbean. They’re now typically shown as friendly creatures that help mankind and bestow supernatural powers.

While you decide if mermaids are dangerous or domesticated, we can safely take a dip with some bejeweled ones. 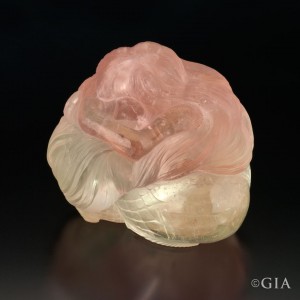 Dreamlike…whimsical…endearing – these are the emotions conjured by Tom McPhee’s Morgana’s Dream. A pastel bicolored beryl is a soothing choice for depicting the princess of the sea asleep on her watery bed. 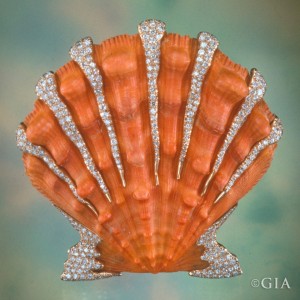 This Lion’s paw shell clip by Verdura, glistens in a receding wave of diamonds set in gold. Mermaids are often depicted sitting on a sea shell throne. A sea shell is a natural ocean treasure, so it’s well suited to the elemental nature of the mermaid. 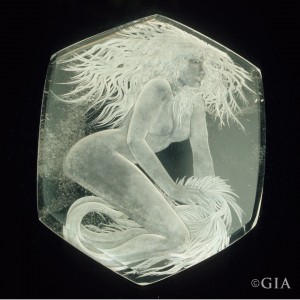 Ariel, a quartz carving by Tom McPhee, looks like the kind of mermaid who lured men to their death. Raw, sensual, and with a head of tangled seaweed hair, Ariel represents untamed Mother Nature. 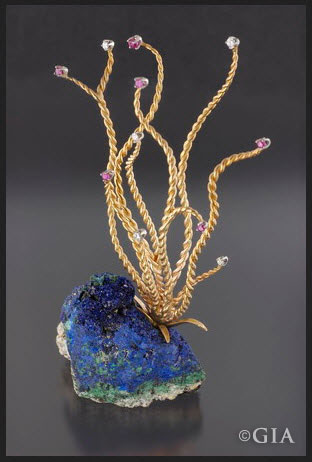 Pierre Touraine’s “Octotilla Cactus” looks like branches of sea kelp waving in the ocean current. Made of 18K gold, rubies, and diamonds, placed on a bed/base of azurmalachite, the piece could be decorating the entrance of a mermaid’s lair.