The holiday celebrated as Day of the Dead in Latin America is actually observed over a two-day period: All Saints’ Day on November 1 is held in remembrance of deceased children and infants and All Souls’ Day on November 2 commemorates deceased adults.  We’ve picked some appropriate jewelry to go with this happy holiday.

For the uninitiated, the Day of the Dead is not a somber occasion, but actually a joyous one. Festivities, feasts, and parties are held to celebrate the lives of the deceased. Favorite foods of the departed are made, offered, and eaten. Photos are hung, altars are built, and friends and relatives dance and sing to celebrate their loved ones who have crossed over. 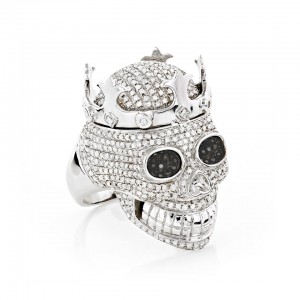 The King’s Crown, with 2.75 carats of diamonds in 10K white gold, captures the spirit of the Day of the Dead. Courtesy: www.ItsHot.com

The cultural roots of the Day of the Dead explain why a typically sad event is considered a happy occasion. Indigenous peoples living in South and Central America believed that life was a dream, and that the after-death state was when we were truly alive. A poem by an unknown Pre-Columbian writer from the Nahua people (Aztecs, Chichimecas, Tlaxcaltecas, and Toltecas), beautifully expressed this:

It is not true, it is not true
That we come to live here
We came only to sleep, only to dream.

The holiday celebration originated with the Aztecs and other Meso-American civilizations who collected skulls as trophies, which were used in a ritual held in the month of Miccailhuitontli (our August), in accordance with the Aztec Solar Calendar. In an effort to convert indigenous peoples to Catholicism during the Spanish conquest, the ritual was adapted to Christian beliefs, and so the celebration days were changed from the beginning of August to November 1st and November 2nd, which are the Catholic holidays of All Saints’ Day and All Souls’ Day. 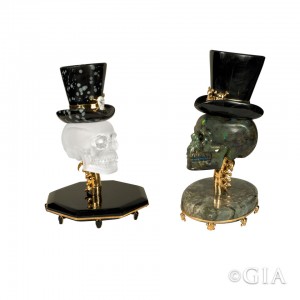 Luis Alberto Quispe Aparicio’s sculptures capture the spirit of the holiday. The skull of Top Hat Gentle-Skull (left) is carved from Madagascar rock crystal quartz and sits atop gold vermeil vertebrae on an obsidian base. The skull sports a snowflake obsidian hat with a gold vermeil hat band adorned with a rock crystal skull. Cavalier’s skull (right) is carved from Madagascar labradorite and sits on a labradorite base. Its hat is obsidian, and gold vermeil is used for the hat band as well as the vertebrae. Photo: Orasa Weldon/GIA. Courtesy: Luis Alberto Quispe Aparicio

Honoring the dead is a universal tradition. Variations of the tradition are celebrated in Guatemala, Bolivia, Brazil, and Ecuador. Araw ng mga Patay, the Day of the Dead in the Philippines, is celebrated by spending time at the grave of the deceased singing, playing cards, eating, and dancing. The Nepalese dress in costumes during Gai Jatra, sometimes referred to as festival of cows. All Souls’ Day (November 2) is a Roman Catholic holiday that honors the passing of the faithful, but it is a more solemn day filled with prayer.

The dead return to life in Cadet-Picard’s gold and enameled stick pin from 1867: the eyes move and the jaws open and close12. © Victoria and Albert Museum, London.

When Auguste-Germain Cadet-Picard exhibited his jewelry with moving parts (powered by a battery carried on the wearer of the item), it won the admiration of visitors to the 1867 World’s Fair in Paris. Henri Vever, the great Art Nouveau jewelry designer, described Cadet-Picard’s work as “jewels of near-terrifying originality.”

Halloween is another occasion where skulls appear en masse. Nineteenth-century Americans celebrated the holiday by dancing, singing, and telling stories of the deceased. 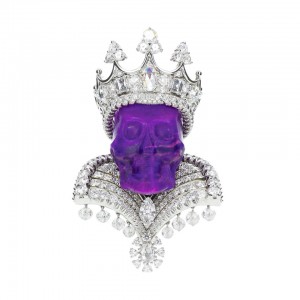 “Savor life to the fullest15” is the message of Victoire de Castellane for Dior Joaillerie’s 2009 Reines et Rois Haute Joaillerie collection made from platinum, diamonds and colored stones. The King of Sugilite pendant is one of 10 pendants (kings) and 10 rings (queens). Courtesy: 1stdibs.com

Day of the Dead reminds us to cherish our loved ones. Jewelry – objects laden with emotion – is perfect for marking life’s changes.

Sometimes jewelry is a tangible reminder of love, and sometimes it carries a hidden meaning. The Lover’s Eye is an example of unusual jewelry used to send a secret message.