Want to spice up your look? Then consider adding green gemstones to your wardrobe. These perennially beautiful gemstones evoke new life, so you’ll look radiant – regardless of the season. Use our guide to find your perfect green gem! 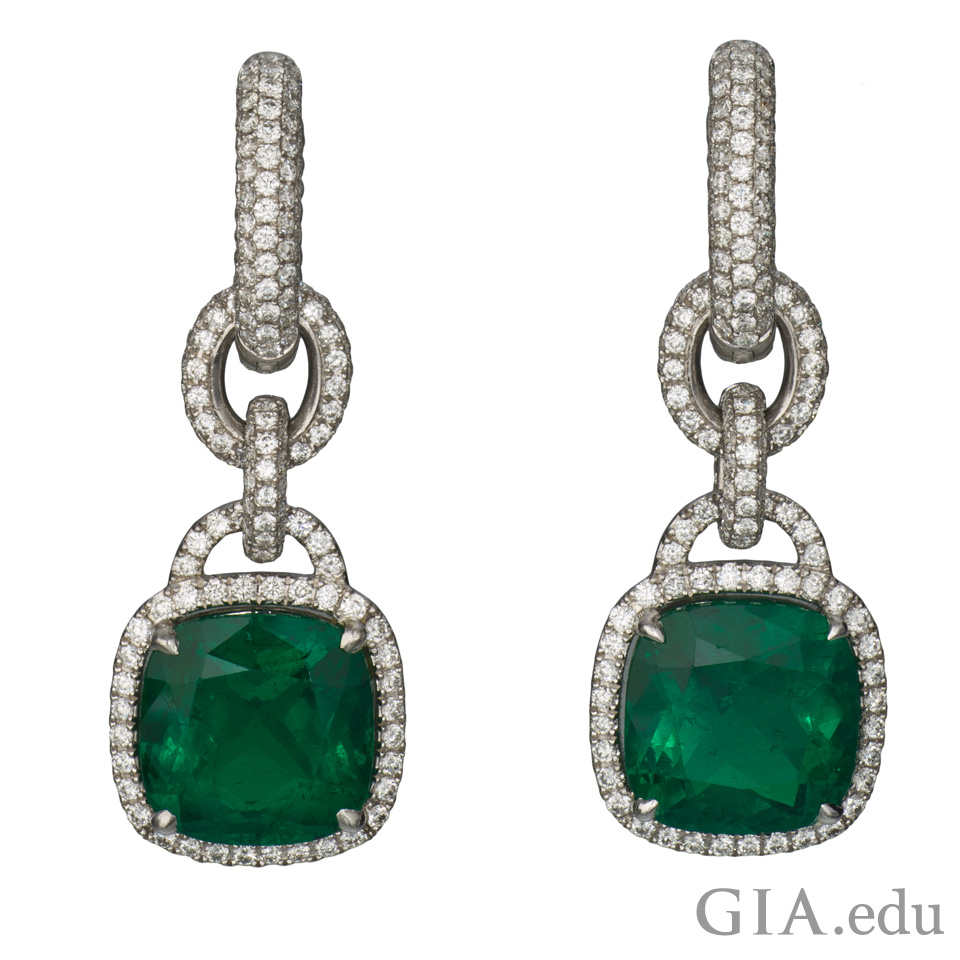 Emerald, the May birthstone, is probably the first green gemstone that comes to mind – and for good reason: emerald was cherished by Egyptian pharaohs, Inca kings, Spanish conquistadors, and the Mogul rulers of India. It still casts its spell on gem aficionados and the fashion-conscious seeking a color pairing with Pantone’s 2016 Colors of the Year, Rose Quartz and Serenity.

Emerald is a variety of the mineral beryl. The finest emeralds are bluish green to pure green, with vivid color saturation. Emerald gets its green color from the presence of either chromium or vanadium. It takes a specific geological environment to produce this coveted green gemstone, as a result, emerald is found only in a few places on earth.

Most emeralds have inclusions – internal clarity characteristics like gas bubbles, minerals, and fractures. Manufacturers often treat emeralds to disguise inclusions to improve the gem’s appearance. A common emerald treatment is filling fractures with oil, resin, or wax. Fillers and dyes are impermanent and may be damaged or removed, so emeralds often require special care.

Check out our Emerald Buying Guide to learn more about the quality factors to look for and how to care for your emerald jewelry.

The beauty of this 54.46 carat (ct) jadeite is enhanced by the 30 diamonds that frame it. Photo: Robert Weldon/GIA. Gift of Sophie Leu

Jade has been cherished for thousands of years. But did you know that what we term “jade” today actually covers two different gem materials? Jadeite and nephrite are both metaphoric rocks made up of tiny interlocking mineral crystals (Metaphoric rock is rock that has been subjected to very high heat and pressure). This structure of interlocking crystals makes both varieties of jade exceptionally tough – one of the factors that accounts for gem durability.

Jadeite comes in a wide range of attractive colors, the most desirable being semi-transparent with a striking color referred to in the trade as ‘imperial green.’ Jadeite that is yellowish-green, grayish-green, or blackish-green is more common, but similarly prized. The presence of chromium is responsible for green jadeite’s alluring color.

Jadeite is also found in lavender (usually the second-most desirable color), black, white, orange, and other hues. Jadeite that has a fine texture and high polish is more desirable than jadeite with a coarse texture and dull luster. 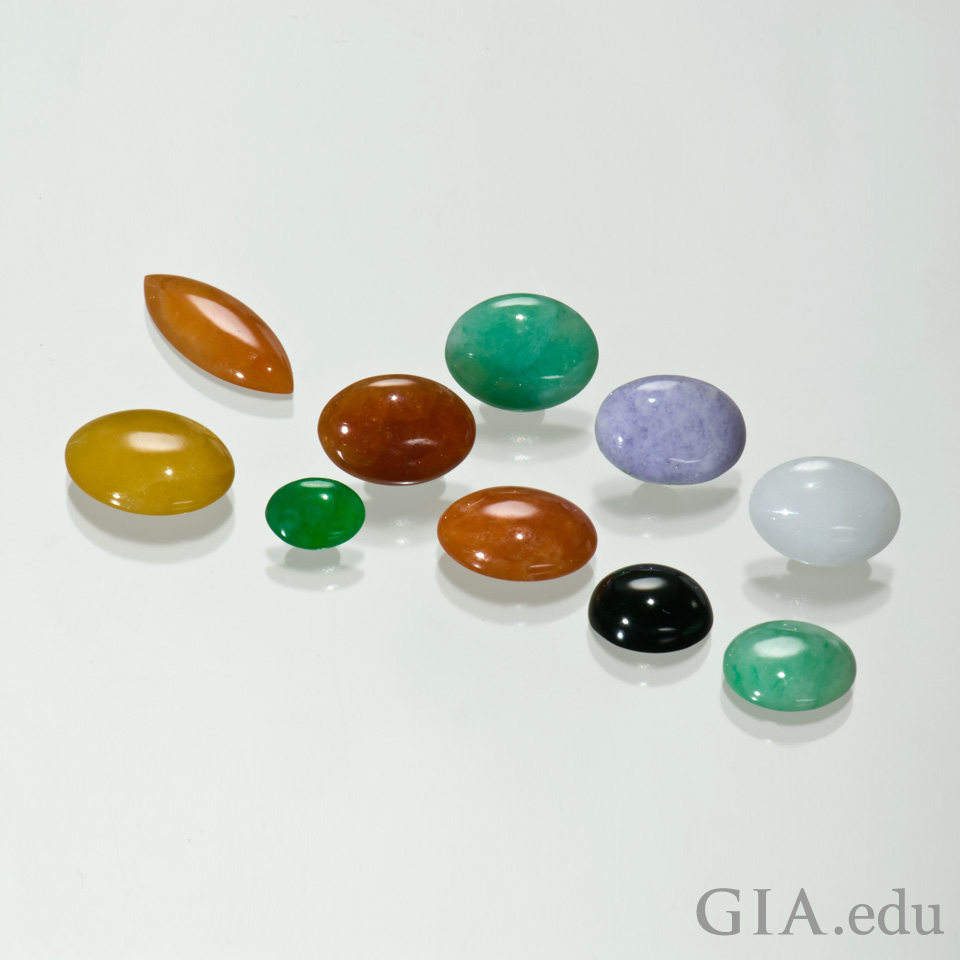 This candy-colored collection of jadeite jade would whet an aficionado’s appetite. The gems range in size from 1.20 ct (the smallest green stone on the left) to 6.15 ct (the deep orange oval in the center left). Photo: Robert Weldon/GIA.

Like emerald, jadeite is often treated to improve its appearance. Some of these treatments are considered common in the trade, such as a very light waxing of the surface called luster enhancement; others are controversial, like dyeing or bleaching followed by impregnation with a polymer. Testing by an idependent gem laboratory like GIA can determine if and how a gemstone was treated.

Nephrite jade is even tougher than jadeite, but the hues are more subdued, darker, and less saturated. Colors can range from translucent to opaque and can be light to dark green, yellow, red, brown, black, gray or white. The cause of color for green nephrite is chromium and iron. It is more available and less expensive than jadeite. So if jadeite is a bit too pricey for your pocketbook, nephrite can be an affordable – and beautiful – alternative.

If you’re traveling to Hong Kong, the Jade Market in Kowloon is the place to find jadeite and nephrite jewelry. Most jadeite you’ll find is mined in Myanmar (formerly known as Burma). If you’re purchasing jadeite to bring to the United States, please bear in mind current legislation bans the import into the United States of jade mined in Myanmar, regardless of where it may have been processed, fashioned, or purchased. 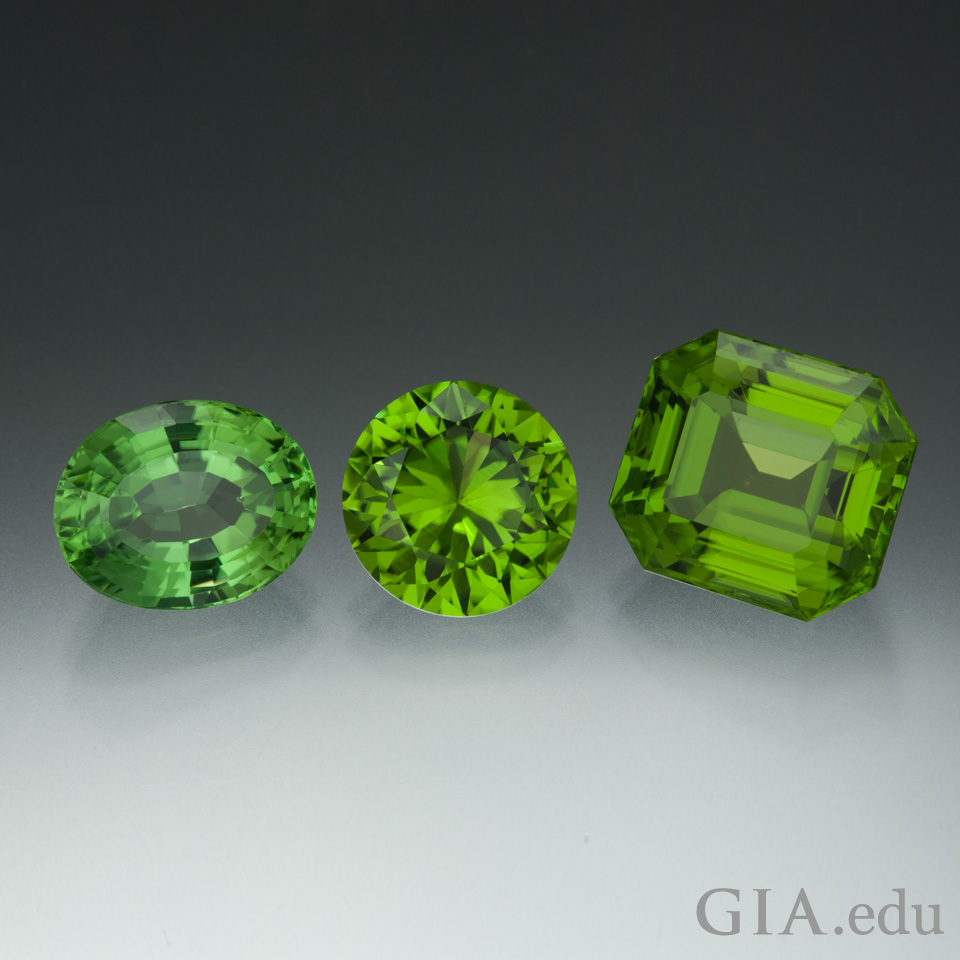 The vibrant greens of these three peridots are sure to please. From left to right: oval mixed cut peridot (10.09 ct); round brilliant peridot (8.13 ct), and emerald cut peridot (19.45 ct). Photo: Robert Weldon/GIA.

Better quality peridot has no eye-visible inclusions. Although, under magnification, you might see minute mineral crystals, and reflective, disk shaped inclusions, known as ‘lily pads’.

‘Lily pad’ inclusions are often found in peridot. Fractures surrounding a small crystal are typically the cause. Photo: John I. Koivula/GIA.

There are no known treatments to enhance peridot’s clarity or color. So, if you purchase this green gemstone it will likely be an untreated gem.

The Ancient Egyptians called peridot the gem of the sun, and for over 3,500 years, peridot was mined on St. John’s Island (Zabargad) in the Red Sea, in southern Egypt. This locality is a historic source for fine peridot, and produced an exquisite specimen that was later fashioned into a 154 ct pear shaped pendant called The Green Goddess. Historically, peridot has often been mistaken for other gemstones. One of the most famous cases of mistaken identity involves 200 carats of peridots set in the shrine of the Three Holy Kings in Germany’s Cologne Cathedral that were once believed to be emeralds.

You may be surprised to learn that garnets aren’t always red. In fact, they come in a wide range of colors, with demantoid, a variety of andradite garnet, being one of the most stunning green gemstones around. Demantoid means ‘diamond-like’ and with its vivid green color and spellbinding dispersion (flashes of spectral colors refracted back from the stone), demantoid has qualities bound to charm. The gem ranges in color from yellowish or brownish green to a very rare intense green hue that rivals the beauty – and price – of emerald. 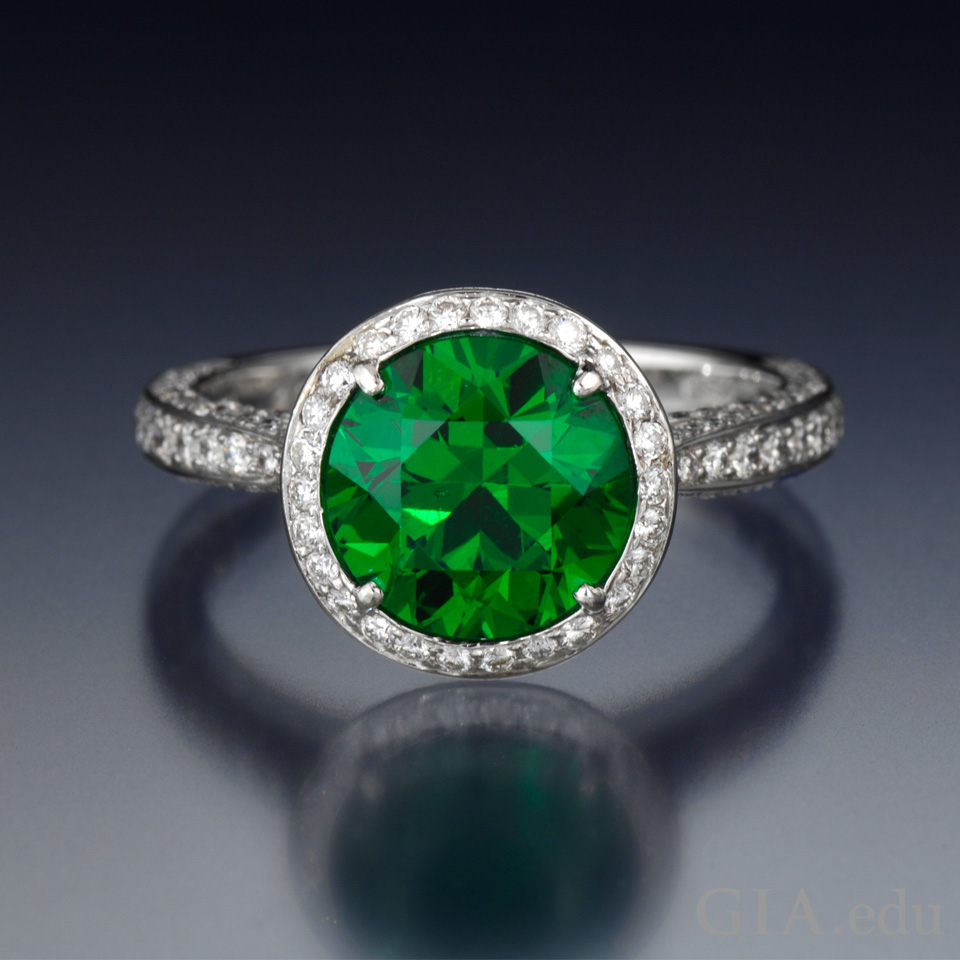 The brilliance and fire of this 3.20 ct demantoid garnet lives up to the name – and shows why Fabergé and the tsars fell in love with the gem. Some 1.06 carats of diamonds circle the stone. Photo: Robert Weldon/GIA. Courtesy: A Touch of Color

Chromium causes demantoid’s color. Demantoid is also the only green gem that can have horsetail inclusions:radiating bundles of mineral fibers. These delicate wisps are quite beautiful, and can increase the value of the gem.

Horsetail inclusions are usually made of two minerals: a tiny opaque crystal that is the focal point, and chrysotile, which flares out from it, creating the appearance of a horsetail. Photo: John I. Koivula/GIA.

Although garnet locations abound around the world, demantoid is found in just a few locales. Namibia is a premier producer of premium quality gems, and demantoid is also found along the Bobrovka River in Russia, where villagers still search for rough. 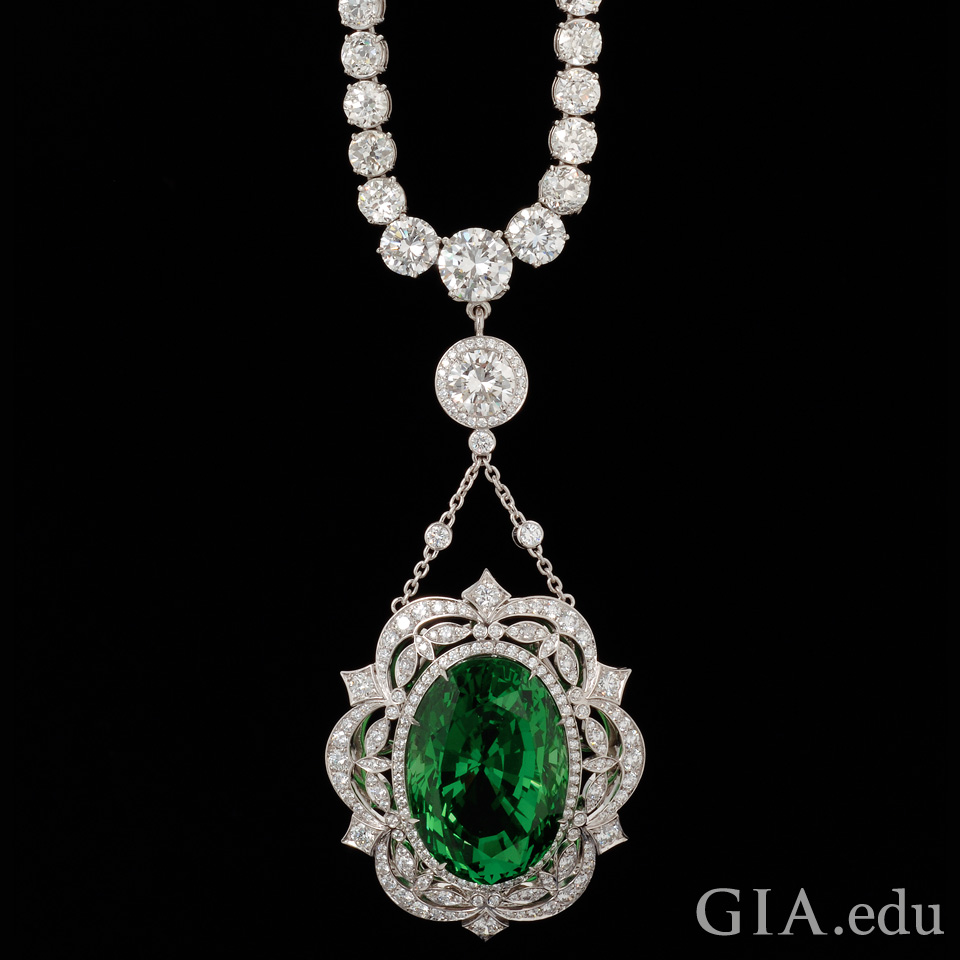 Those with a January birthstone are lucky: the garnet family also contains another fabulous green gemstone. Tsavorite, a variety of grossular garnet, was discovered in the 1960s and in a few short decades, it’s become a popular choice for green gemstones because it is durable and usually free of inclusions.

The presence of the element vanadium produces tsavorite’s range of color – a spectrum ranging from bluish-green to yellowish-green. Vivid, strongly saturated bluish green to green tsavorite is prized over yellowish-green ones.

Tsavorite gets its name from the Tsavo National Game Park in Kenya. Tanzania is another important source for the gem.

Natural green diamonds are doubly alluring: they are breathtakingly beautiful and a bit complicated.

These exceedingly rare beauties get their color from exposure to radiation. Because the diamond’s exposure to natural radiation can be replicated in a laboratory setting, gemological detective work is required to determine if the color is natural or treated. Green or brown surface stains may be an indication that the diamond is natural color. It is not always possible to determine the cause of color in green diamonds. 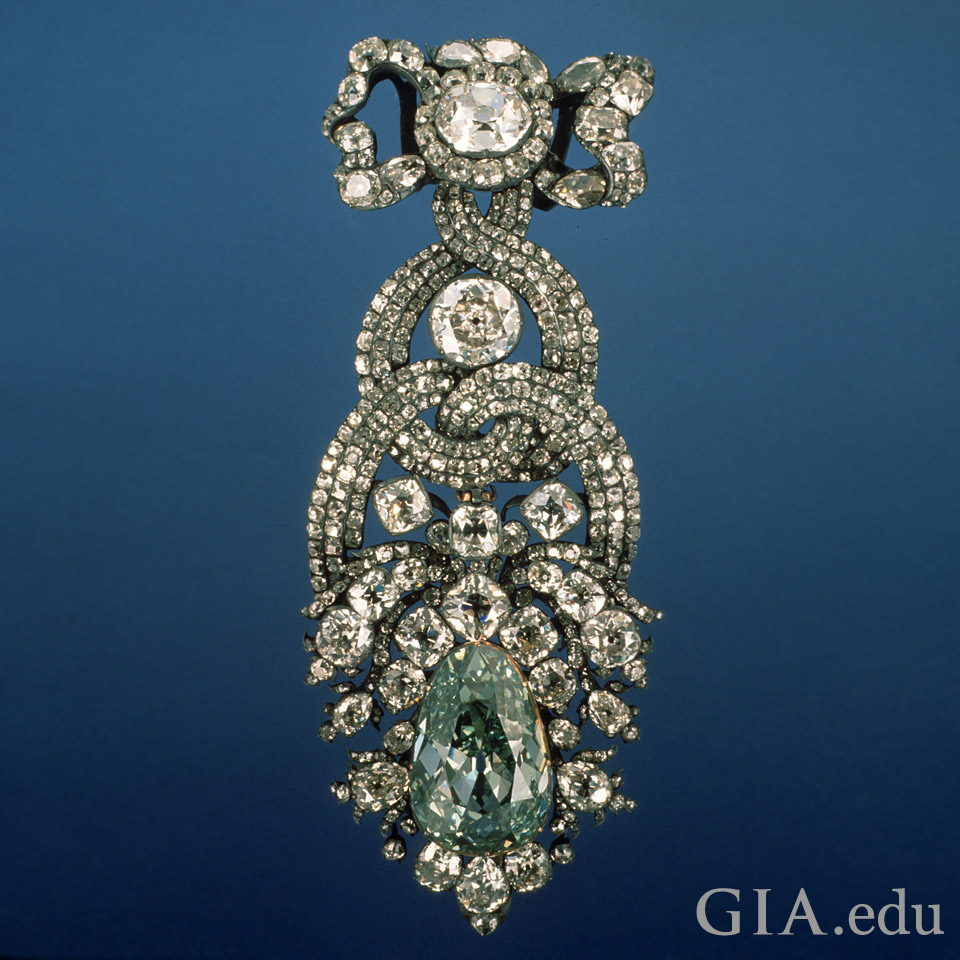 The Dresden Green is the world’s most famous green diamond. It was probably discovered in the Golconda District of India and made its appearance in Europe in 1726. Over the centuries, it decorated monarchs, graced museums, and was hidden during World War II. Now its home is in Dresden, Germany. Photo: Shane F. McClure/GIA.

On rough diamonds, the green color is often only on the surface and is removed in the cutting process. Much care must be taken when cutting green diamonds not to shave off the radiation stains that are responsible for causing the color. Green diamonds are not the only colored diamonds to be considered rare and fascinating.

Emerald. Jade. Peridot. Demantoid. Tsavorite. Green diamonds. There is no shortage of perennially fashionable and beautiful green gems. Now that you know about them, you can dress to match the beauty all around you – no matter the season.

Still looking for more gems to go with Pantone 2016 colors? Take a look at our Pink Gemstone Buying Guide for rose quartz, morganite, pink diamonds, and many more!