Day of the Dead (the Mexican holiday honoring deceased loved ones) lingers long after its passing at GIA’s world headquarters with Faces of Eternity – a collection of 15 gem skulls by Peruvian artist and master carver Luis Alberto Quispe. 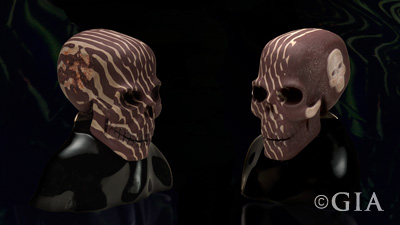 Zebra stone, the material Quispe used for this skull, makes it look as if it had been painted. Carving the skull on the side of the skull was quite an artistic feat. Carvings courtesy of Luis Alberto Quispe Aparicio.

After musing on the transience of life and the timelessness of gemstones, Luis Alberto was inspired to create these skull carvings. He then turned his contemplations into something concrete by making these magnificent pieces, showcasing a creative synthesis of sculpting and jewelry fabrication techniques, and highlighting the artist’s background as an engineer and second-generation master of the object d’art. 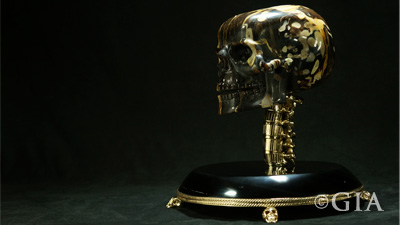 Quispe may have been tackling serious subject matter, but he did it with a sense of humor. This piece is called Chocolate w/ Peanut Butter, and it’s carved from Peanut Wood agate from Australia. Carving courtesy of Luis Alberto Quispe Aparicio.

“The skulls collection was one of my favorite to create. By carving natural gemstones with a combination of lapidary art and metalsmith techniques, you can really see how the colors and textures in each stone brings each piece to life,” said Luis Alberto. 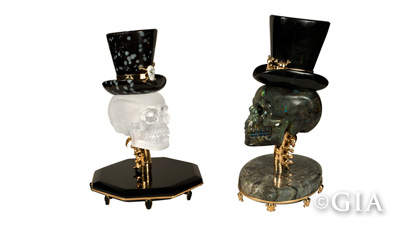 We imagine some secret society of the dead having a gentlemen’s night out. Absurd, perhaps, but Quispe certainly shares a different perspective on mortality in Top Hat Gentle-Skull. Carvings courtesy of Luis Alberto Quispe Aparicio.

The gemstones Luis Alberto selected hail from far-flung places: Peru, Madagascar, Mozambique, Australia, Sonora, Mexico, and Tanzania. It took the artist a year to create the collection – not surprising considering Luis Alberto was cutting blocks of rocks the size of microwaves. Watch him turn these chunks of stone into sculpture – it’s an impressive sight. Or take a minute to admire the craftsmanship of This skull is on fire, which reveals the creativity and talent of the artist. 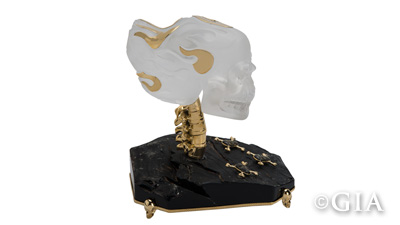 For This skull is on fire, Quispe took a solid rock crystal and enflamed it with movement and dynamism. Small skull and cross bones sit sentinel-like at the statue’s base. Carving courtesy of Luis Alberto Quispe Aparicio.

“The magnificent gems and rocks used to create the skulls, combined with the skill of a master craftsman, give these unique pieces an ethereal beauty. From fossilized whale bone to rainforest jasper, and from pink opal to peanut wood agate, Luis Alberto chose materials from a gem lover’s dream,” said Terri Ottaway, curator of the GIA Museum. “Each skull has a distinctive look and feel to it, making this collection fascinating on both a gemological and an artistic level.”

Faces of Eternity will be on view at GIA in Carlsbad through April 2014. We invite you to see the exhibit, and hope you get to enjoy these remarkable works for yourself.