Ready for a diamond adventure?

We’re heading off to Lesotho – a landlocked Kingdom about the size of Maryland. Surrounded on all sides by South Africa, this mountainous land is the home of the Letseng diamond mine, one of five major diamond mines in the country, and the source of some of the world’s largest and finest diamonds discovered in the last decade.

Provided you are invited to see the mine, getting to Letseng is not easy. It’s about a six-hour drive over precipitous and winding mountain roads from Maseru, Lesotho’s capital city, or an eight-hour drive from Johannesburg, South Africa. Either way, you’ll cross high mountain passes, wind past remote highland villages that, through altitude and desolation are reminiscent of Tibet. 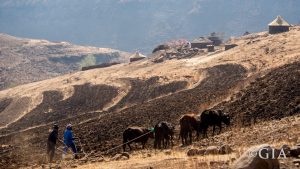 Lesotho’s rural panorama is filled with farmland, tiny picturesque villages, and friendly mountain people, the Basothos, who often travel by horse to get from one village to another. Photo by Robert Weldon/GIA.

At 10,000+ feet above sea level, Letseng is the world’s highest active diamond mine. That means frigid temperatures as low as -130 F during the winter months, and the challenge of getting 50-ton mining trucks up steep, largely unpaved roads. 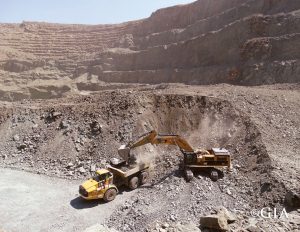 A bird’s eye view of the Letseng diamond mine. Photo by Russel Shor/GIA.

Diamonds at Letseng were discovered in 1957, but the mine was intermittently abandoned over the decades because of its remote location, political strife, and the difficulty of mining it profitably.  Government officials revived exploration in 2004, and then something remarkable happened: miners unearthed the Lesotho Promise in 2006.

At 603+ carats, the Lesotho Promise was the 15th largest rough diamond ever found.  Diamond cutters at Graff spent a year figuring out how to work around dark inclusions scattered throughout the stone; making sure the stone didn’t shatter when cutting began; and deciding on the diamond shapes that would finally be yielded from the rough. 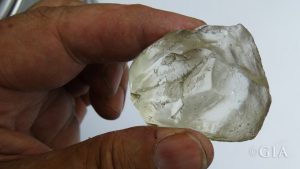 A replica of the Lesotho Promise diamond.
Photo by Russell Shor/GIA.

Letseng continued to give, producing three 450 ct-plus rough diamonds since the Lesotho Promise, including the 493 ct Letseng Legacy (2007) and the 478 ct Light of Letseng (2008), which yielded the 102.79 ct Graff Constellation (2009). GIA graded the Graff Constellation, and according to Graff, it is the largest known D-Flawless round brilliant diamond.

The quality of Letseng’s diamonds is also noteworthy: approximately a quarter are prized Type IIa diamonds (in comparison, only about 2% of diamonds found at other mines are Type IIa).  Since Type IIa diamonds have no measurable amounts of nitrogren or boron, they are the most chemically pure. 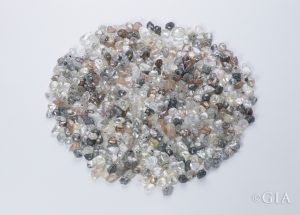 Production from the Letseng diamond mine. Photo by Robert Weldon/GIA.

Letseng gives diamond connoisseurs yet another reason to celebrate: it is expected to continue to produce fine-quality diamonds for many years to come. The mine is also a boon to Lesotho: it employs 1,500 people, generates 70% of Lesotho’s corporate tax revenue, and 60% of the country’s foreign exchange earnings. That’s a win-win situation for everyone.