Step into our time machine and travel back to early 19th century Europe. Napoleon has successfully invaded Prussia, an empire that once sprawled across much of Europe. The ousted Prussian government is now trying to fund the War of Liberation, which takes place 1813-1814. An appeal is issued: donate your gold and jewelry to the treasury, which will allow the government to raise money for the fight. In return for your gift, you will receive jewelry made of iron.

Berlin iron – the name of this unusual jewelry – debuted shortly after the start of the 19th century. Production reached a peak during Prussia’s War of Liberation.

The jewelry was produced by sand-casting in a foundry. An item was pressed into damp sand to create the mold. When the sand dried, melted wax was poured into the impression and used to cast the iron. A black lacquer finish was applied to the surface of the jewelry. Many pieces were engraved with the phrase “Gold gab ich für Eisen 1813,” which translates to “I gave gold for iron 1813”. 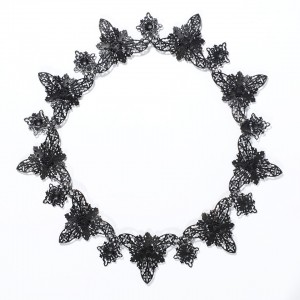 Making iron look like lace shows the impressive workmanship of the Berlin iron craftsmen. As intricate as a spider’s web, this necklace is rich in exquisite details.
© Victoria & Albert Museum, London

Wearing a piece of Berlin iron was a symbol of patriotism and resistance against Napoleon (who was forced to retreat in October of 1813. Berlin iron later became fashionable across the continent. To meet the demand, Berlin iron craftsmen created bracelets, earrings, brooches, necklaces, hair ornaments, and other decorative items. The style became so popular that Berlin was home to 27 foundries in the 1830s. The fad eventually petered out, but a piece of Berlin iron in excellent condition is now prized by collectors. 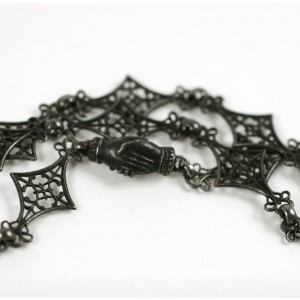 A close-up of a necklace shows its many impressive details, like the hands that function as its clasp. Courtesy: 1stdibs.com

Favorite subjects depicted in early Berlin iron pieces included ancient Greek warriors, Cupid (god of love), and Psyche (goddess of the soul). These were popular motifs of the neoclassical movement (approx. 1760-1830), which celebrated the art of Ancient Greece and Rome. As these designs were in vogue, they found expression in Berlin iron. 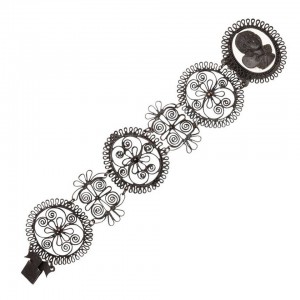 A winged goddess, possibly Psyche, is the focal point in this Berlin iron bracelet, circa 1820. The curls in the goddess’s hair are echoed in the swirls in the piece. Courtesy: 1stdibs.com

Gothic Revival, which celebrated the Middle Ages, took hold of the European imagination from 1830 to the end of the century. And so Berlin iron craftsmen began incorporating motifs found in Gothic architecture, like the trefoils, quatrefoils, and pointed arches that are often seen in cathedrals.

The trefoil, quatrefoil, and pointed arch seen in Gothic architecture. 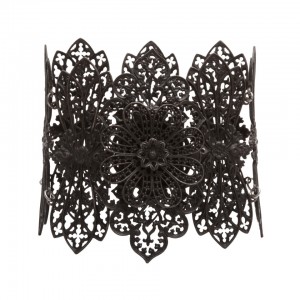 Notice the many quatrefoils and pointed arches in this Berlin iron bracelet. Courtesy: 1stdibs.com

Untold numbers of Berlin iron jewelry have rusted away since their creation. While you can still find some pieces for sale, various museums will have collections as well like the Metropolitan Museum of Art and the Victoria and Albert Museum.

An ornate cross hangs from a chain made of double links. A floral bouquet placed on a steel mirror decorates the center. Courtesy: 1stdibs.com

Berlin iron jewelry is a snapshot of a moment in time. But the style has a timeless message: it tells of a people trading in their valuables for a greater good. And that is yet another reason to appreciate its curious charm.

Berlin iron and Gothic revival still inspire jewelry designers. See how today’s creators are creating pieces that end up in the display case and on the runway.