The 1960s gave us the Beatles, flower power, and the first moon landing, but also war and political upheaval. It was a time of turmoil and unprecedented social change, and the period’s influence on fashion and jewelry design was unmistakable.

Fashion goes in cycles, so the saying goes. Jewelry motifs from the 1960s are now showing up in contemporary designs, and 60s vintage jewelry is a hot item for many jewelry collectors. We think that’s groovy!

We invite you to sit back, play a track from your favorite 60s rock band, and read on!

Asymmetrical Designs
Draw a line down the middle of a piece of jewelry. If the two sides are not identical but have equal visual weight, it is an asymmetrical design – a hallmark of 60s jewelry, which reflected the chaos and turmoil of the times. Compare this to the symmetrical designs that defined the Art Deco period (1920s and 1930s), which spoke of a bright future; and the garland style of the Edwardian Era (1902-1910), which English aristocrats wore to show their rank and wealth. 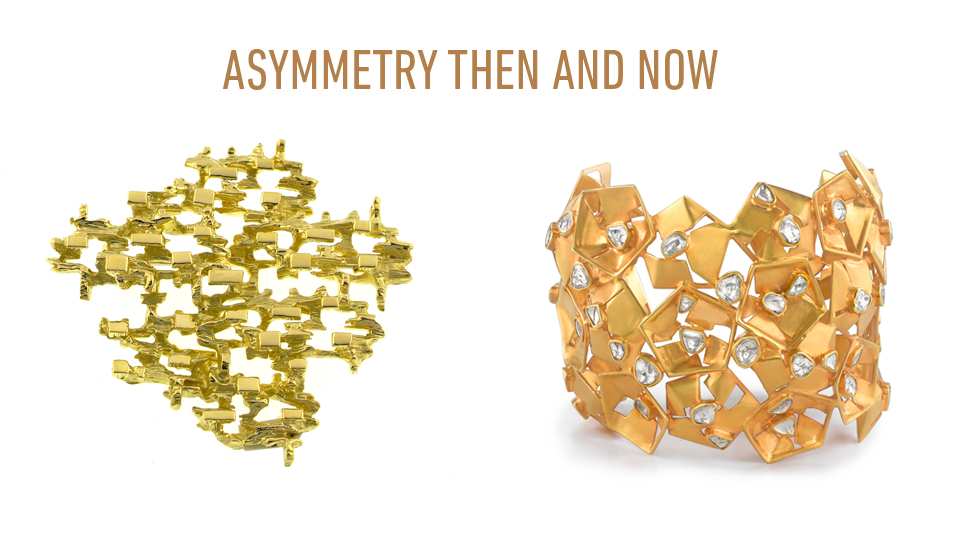 Left: This 18K brooch (circa 1965), designed by Jean-Claude Schweizer and manufactured by Gübelin, is made with abstract, asymmetrical, jagged shapes – appropriate choices to express a tumultuous period. Photo by Don Mengason/GIA, gift of Thomas P. Gubelin
Right: Amrapali’s contemporary cuff (around 2015) is a collection of colliding asymmetrical geometrical shapes. It’s a reinterpretation of 60s jewelry, and could have been decorating a boutique on London’s famed Carnaby Street some 50 years ago. Photo courtesy of D’Orazio & Associates

Geometric Designs
Using simple angular shapes (squares, triangles, etc.) to make complex patterns was a popular design device in the 1960s. Geometric motifs have been used since antiquity and were especially prevalent during the Art Deco era. Jewelry designers of the 1960s reimagined them for their own purposes. These designs can be either symmetrical or asymmetrical and often incorporate other design elements. The peace sign, with its straight lines forming angles within a circle, is a famous example of a geometric design from this period. 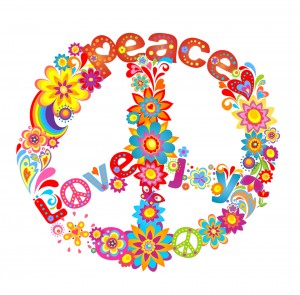 This peace sign combines several characteristics commonly seen in the 1960s: its basic shape is geometric and it is decorated with abstract floral designs in vibrant colors.

Unusual Colors
Designers of the 60s dispensed with the color palettes of previous eras, choosing more vibrant and unusual ones. Light-pink coral paired with emerald; intense medium-blue turquoise, white pearls and gold metal beads;  chalcedony, and colorless diamonds – jewelry made with these materials and colors were appropriately fashionable in an era of psychedelic clothing and album covers, and brightly hued paintings by Peter Max. Gone was the sleek platinum look of the Art Deco Era, and the large citrines, amethysts, and topazes of the 1950s.

Left: Vivid green, blue, and red hues pop in these 18K yellow gold and enameled bracelets by Jean Schlumberger for Tiffany. This design was created in 1962 and is still being made today. Photo © GIA & Tino Hammid.
Right: Introduced in mid-2014, Brumani’s 18Kyellow gold Baobab bracelet has round brown diamonds, aquamarine, ruby, and pink tourmalines. It’s an unusual color palette that harkens back to the 1960s. The bracelet also has cabochon cut stones – another hallmark of the period. Photo courtesy of D’Orazio & Associates.

Space – the Final Frontier
The “Space Race” – the competition between the United States and the Soviet Union to master space flight – began in the mid-1950s when both countries launched satellites and unmanned space probes. Soviet cosmonaut Yuri Gagarin first orbited the earth in 1961; in 1969 American astronauts Neil Armstrong and Buzz Aldren first orbited and landed on the moon, when Armstrong took his historic moon walk. Between 1969 and 1972, six more Apollo missions were completed. Imagery evocative of space travel expectedly ended up in fashion and jewelry. The flaming star (which looked like an exploding sun) was an appropriately popular motif during this time period. 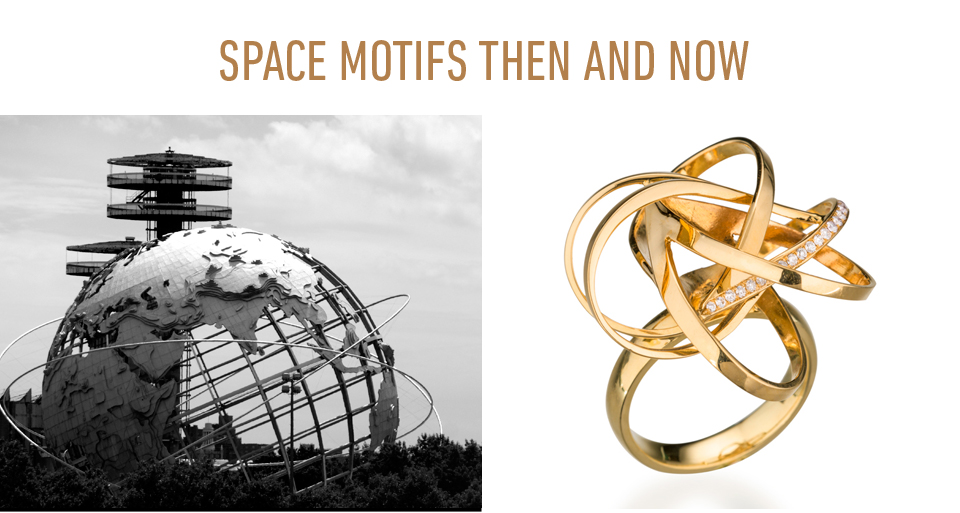 Left: Andrew Grima’s brooch (1967-1968) is in the shape of a flaming star. It’s also characteristic of the 1960s: the gold work is asymmetrical; the lapis lazuli center stone and turquoise side stones are cabochon cut; the color combination is bold. Photo courtesy Trustees of the Victoria and Albert Museum.
Right: Although pared down and colorless, we see echoes of the flaming star motif in these contemporary 18K white gold and diamond earrings by Doves by Doron Paloma. Photo courtesy of D’Orazio & Associates.

Experimentation
The 1960s may best be remembered as a period of experimentation. The Woodstock Music and Art Fair, the Haight-Ashbury area of San Francisco, and the hippie subculture, all epitomes of the counter-culture revolution, were reactions against the status quo. Many jewelry designers followed suit, dispensing with faceted gems for cabochons or uncut stones; polished metal surfaces for textured materials; and traditional motifs for abstract designs. This spirit can still be seen in the work of contemporary avant-garde designers.

Left: John Donald’s gold brooch with a baroque pearl (1969) could double as a piece of abstract sculpture. Queen Elizabeth II and Princess Margaret were admirers of his work. Photo courtesy Trustees of the Victoria and Albert Museum.
Right: Abstract sculptural qualities define this piece by contemporary jewelry designer Jorge Adeler, who took a piece of a Russian meteorite and made it the star of his ring. Photo courtesy of D’Orazio & Associates.

Back to Nature
In Woodstock, a popular song recorded in 1969, Joni Mitchell sang: “We are stardust. We are golden. And we’ve got to get ourselves back to the garden.” This yearning to return to a pre-industrial paradise found expression in the tie-dyed clothing of hippies, “flower power,” the peace sign, and many other iconic images. Some of the symbols are showing up again in popular culture, while some jewelry designers have appropriated them for their work. 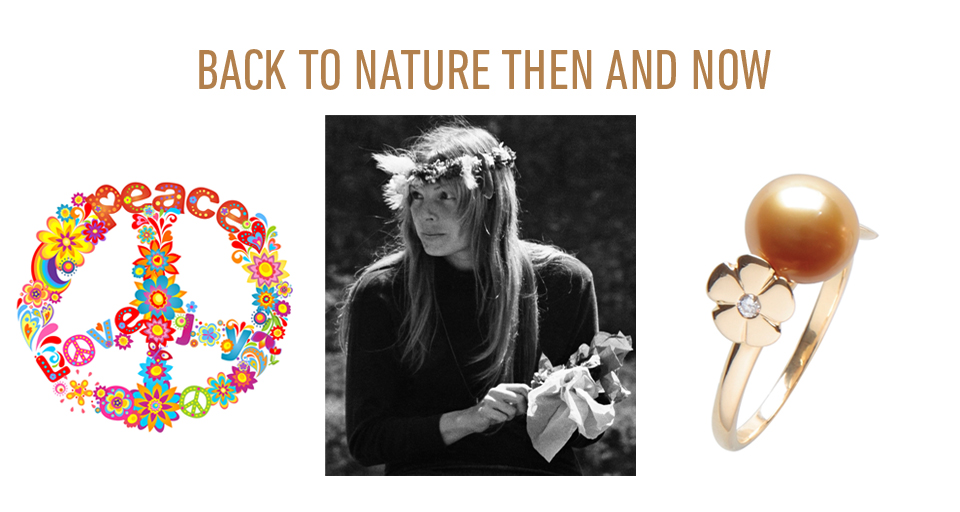 A number of visionary designers created the jewelry of the 1960s. Here’s a quick look at some of the more influential ones.

If you want to purchase 60s jewelry, you won’t have to search far: Cartier, Van Cleef & Arpels, and Tiffany & Co., are reissuing iconic pieces designed in the late 1960s-1970s. And, of course, a number of designers are refashioning the style to speak to 21st century jewelry lovers. So “fab” options abound.

Want to learn more about period jewelry designs?  Brush up on the Art Deco and Art Nouveau periods.

Main image courtesy Trustees of the Victoria and Albert Museum.