Happy Birthday January! We begin our famous birthstone series with none other than January’s birthstone, garnet. While there are many different species and varieties of garnet that come in many colors, perhaps the most well-known is pyrope garnet. Usually deep red, this gem is featured in the antique pyrope hair comb, a stunning and historic example of pyrope’s beauty, and GIA’s famous birthstone for January babies. 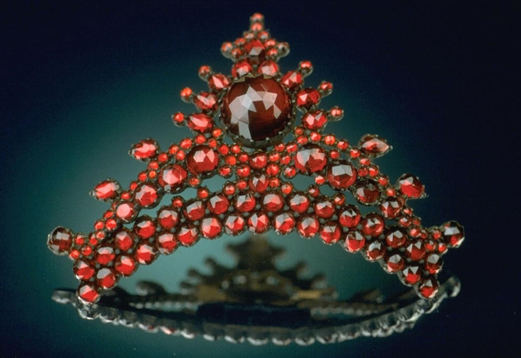 This is no ordinary hair comb! This antique hair comb hails from the Victorian Era. Each of the pyrope garnets are rose cut, a popular cut during this era. The rose cut has a faceted top and flat bottom and gems were often mounted in yellow gold, gold plate, or mixed metals. Originally from mines in Bohemia, now part of the Czech Republic, Bohemian pyropes cover this gorgeous piece. Ales and Maria Herdlicka donated it to the Smithsonian Institution in 1937.

What Sets Pyrope Apart From Other Garnets?

Garnets are a group of closely related minerals with essentially the same crystal structure that vary in chemical composition. Garnet’s chemical composition determines its hue, and depends upon the conditions surrounding the formation of the gemstone. Pyrope’s dark, pomegranate color is characteristic of this gem. In fact, pyrope takes its name from the Greek word pyropos which means “fire eyed” or “fire like”.

Pyrope garnet deposits were found in Bohemia in Central Europe around 1500. The presence of pyrope garnet caused the regional jewelry industry to flourish, reaching its peak in the late 1800s. But red garnets had been popular for thousands of years before this discovery. For instance, Egypt’s pharaohs were known for wearing red garnet necklaces, found entombed with their remains. These gems were thought to be prized possessions in the afterlife. Red garnets were also favored by clergy and nobility in the Middle Ages.