If you love gems and jewelry, you will find Tucson, Arizona particularly fascinating.

Thousands of gem dealers, jewelry enthusiasts, and rock and mineral fans descend upon this picturesque desert city every February to tour the more than 40 shows offering dazzling collections of gems, jewelry, and minerals from every corner of the globe. The public comes to “ooh” and “ahh” at a rainbow of gems coloring display cases and trendy jewelry, while buyers and sellers get down to business at industry-only shows.

Each year, GIA exhibits at the  trade-only American Gem Trade Association (AGTA) show, displaying its educational offerings to jewelers and offering gemological laboratory services at the show.  Tucson is a great place for gem professionals and enthusiasts to meet, exchange ideas, and learn from each other.

GIA gemologists and other staffers often use Tucson as a learning opportunity to stay on top of what’s happening in the colored stone world and the market in general.  Here are just a few insights from some of the staff who attended this year. 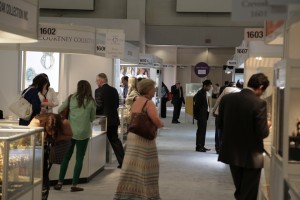 “Going through the event halls is like walking through a rainbow of gemstones. The AGTA and the Gem & Jewelry Exchange (GJX) shows had a mixture of beautiful, high-end stones and more affordable “everyday” (ha!) stones that were amazing.  I saw some padparadscha sapphires, Imperial Topaz, and amethyst that were particularly spectacular. There were mountains of eye candy everywhere you turned.”

“The peripheral shows spilled into parking lots and motel rooms, where vendors sold everything from various sizes of rough, to polished stones of every variety, and even museum-quality geodes. Each show was inspiring in its own way.  The Saturday night highlight was the AGTA awards show for jewelry. The overall experience was like being on vacation. I can’t wait to go next year.” 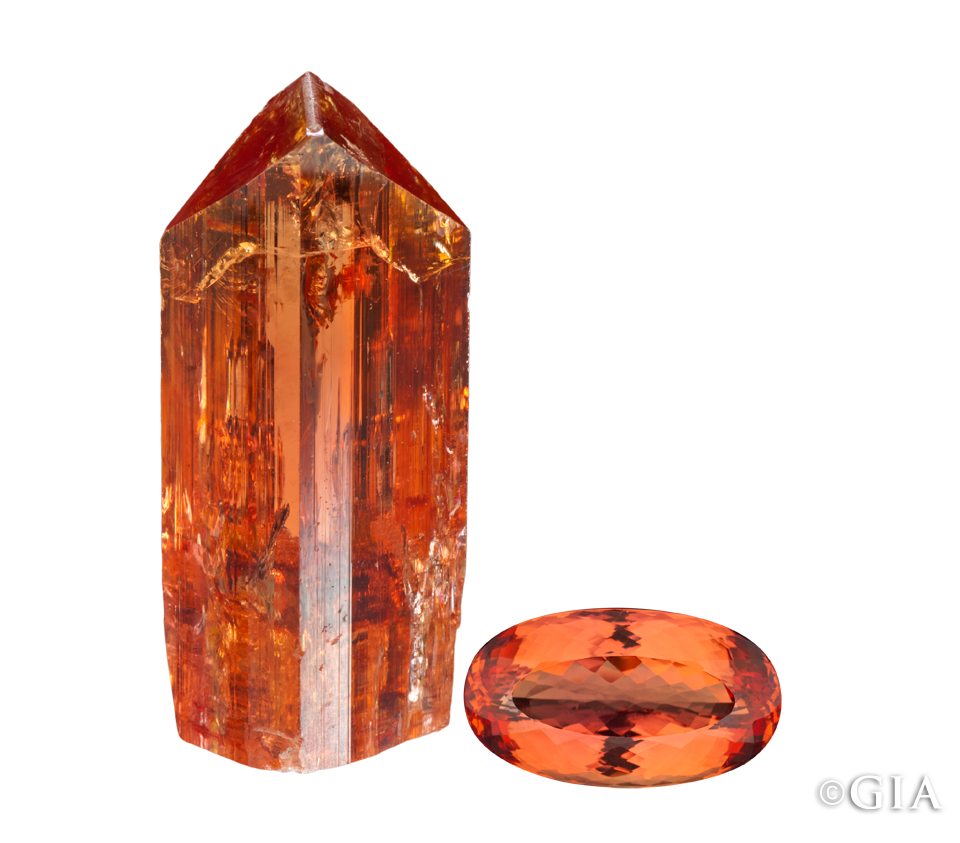 Imperial Topaz is the rarest and most valuable shade in medium reddish orange to orangey red hue. Photo by Robert Weldon

Rick’s description proves AGTA didn’t disappoint with the amount of brightly colored gemstones that are capturing the attention of editors, stylists and consumers alike. Topaz, one such popular gemstone, is well-known as November’s birthstone and comes in a variety of shades including blue, red, pink, purple, yellow, orange, brown, and green. The Imperial Topaz mentioned and shown above is the rarest and most valuable shade in medium reddish orange to orangey red hue. Mostly found in major gem producing country Brazil, its scarcity is reflected by its higher value. 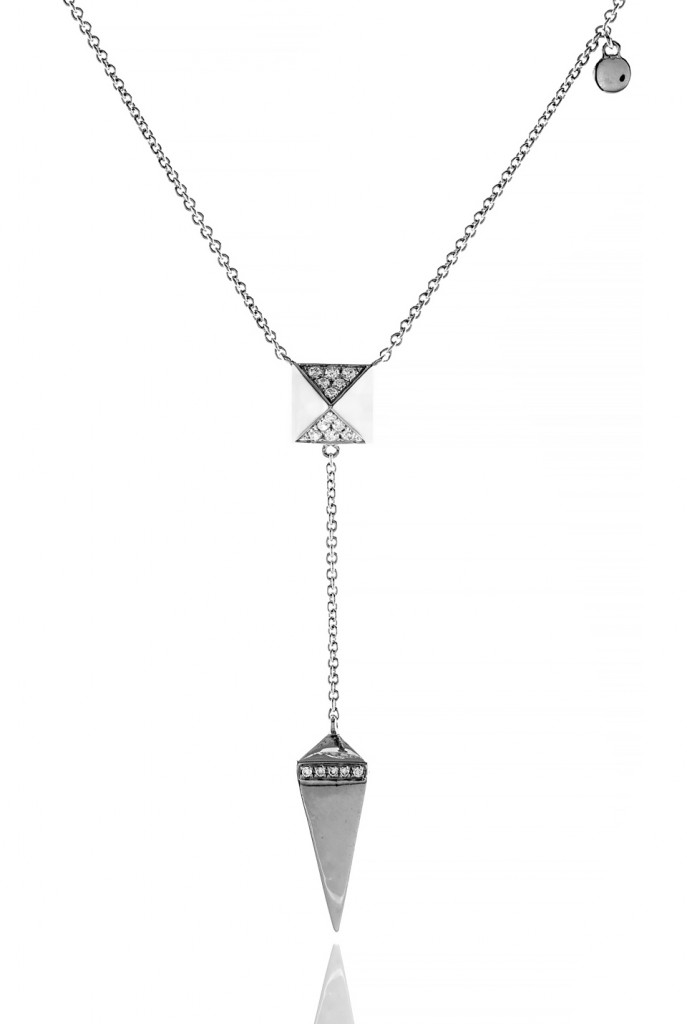 “I’ve been going to Tucson for the past 13 years, so I see the show with a bit of a different eye. I look for what is unique and popular.”

“I saw a strand of freshwater pearls, ranging in size from 15.4 mm to 19.3 mm. This is incredibly rare. The time it took to collect and match them is inconceivable. I also stumbled upon a Belgian designer, Laurence Bruyninck, who creates interchangeable rings and designs that can be easily customized by the wearer. It’s a wonderful way to build on the original ring, and makes for a thoughtful anniversary present.” 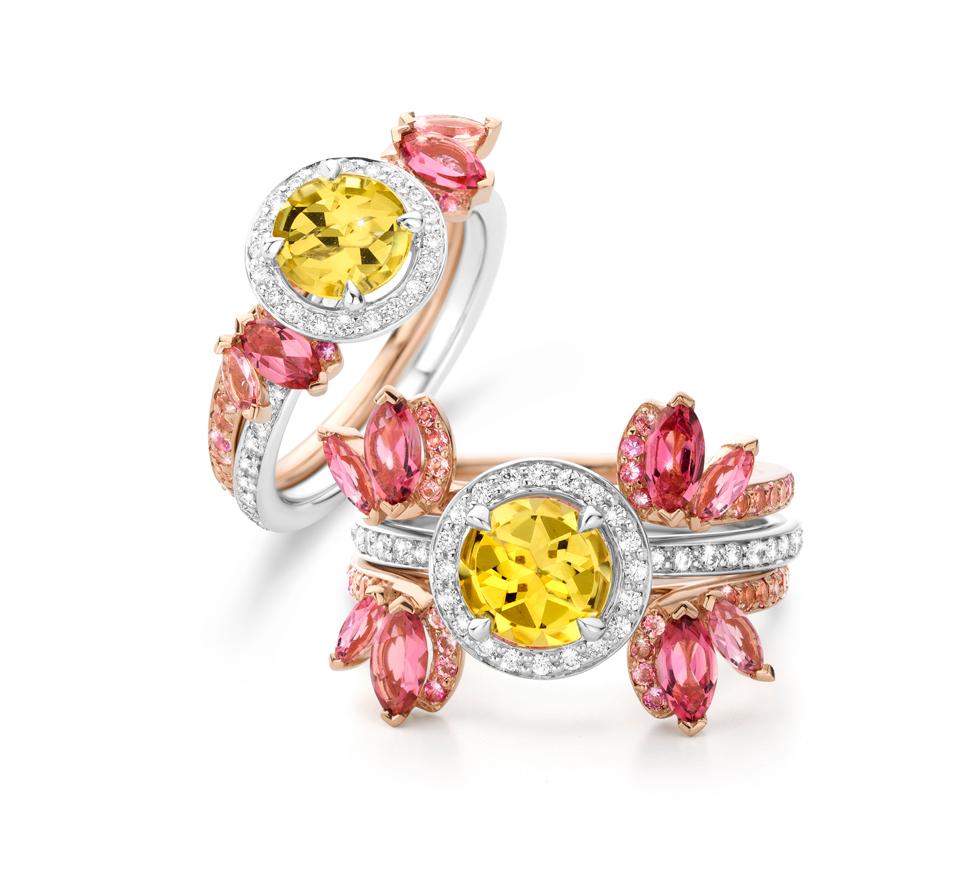 As Peggy mentions above, there has been a recent major trend toward stacking smaller rings together, and Laurence Bruyninck executes this look well. In fact, she took 2nd place in bridal wear with an 18k rose and white gold ring featuring a .80 ct. golden beryl accented with orange citrines, orange sapphires, and diamonds.  The idea of interchangeable jewelry has evolved over the decades. Have a look at ‘The Genius of Convertible Jewelry During the Art Deco Era’ for another take on the various twists and turns of jewelry design from the 1920s. A wedding band above undergoes a transformation by Laurence Bruyninck – but all additions are removable and interchangeable. This lets wearers modify their rings based on their moods.

And last, but certainly not least, this from a member of the GIA Corporate Communications team:

“There were so many beautiful gems – it was overwhelming. A beautiful 5.00 carat Paraiba tourmaline was breathtaking. Opal teeth (for your mouth) were something you won’t find at your local jeweler. Diamond slices in jewelry showed up in trendy jewelry.”

This corporate communications team member identifies colored gemstones as a trend to watch in jewelry this year. They make a strong impression again with Paraiba tourmaline and watermelon tourmaline pieces. The several education seminars on colored gemstones also highlight their favor among gem experts and consumers alike. Diamond slices are an up and coming jewelry trend using diamond rough and featuring the unique inclusions as decorative designs.

Hot trends and interesting finds come out of Tucson’s AGTA this year.  We hope our short tour sparked some ideas for your wardrobe and jewelry box.

On the hunt for new jewelry? Check out our tips for buying exceptional pieces.

The Tucson Gem and Mineral Society show, “Shades of Blue – Minerals of the World”, takes place in February 2016.  Open to the general public, the show attracts more than 30,000 visitors. We can’t wait to see and share with you the wondrous blue gemstones on exhibit. What blue hued treasures are currently in your jewelry box? Catch our feature on Winter Blue Gemstones  to gaze at jewelry pieces featuring this cool blue hue.